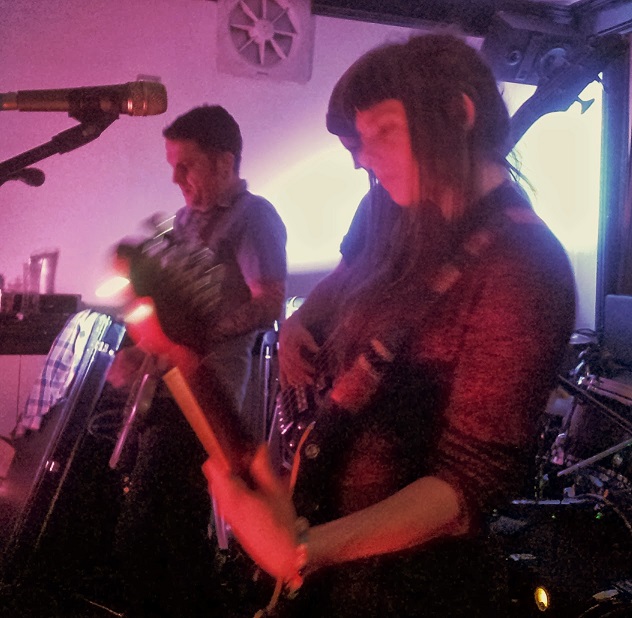 It was so loud tonight that my spleen felt like it was being pulverised, and I cursed myself for leaving my ear plugs at home (…who said that..?!)
Wrexham is where it’s all happening at the moment, a bustling scene run by like-minded people with one common interest at heart – LIVE MUSIC.
Central Station is, and has been for many years a great venue for the touring, slightly under / slightly over the NME radar bands. Saith Seren keeps on keeping on, and we have The Commercial; a back alley pub with a licence to print music… Ace! And, as I said, it’s down to a group of people (who gather together to put on the excellent Focus Wales Festival in April) who are strong willed and make things happen.

Making things happen tonight is Bob Spectrum (or birthday boy Brendan) with the pre-album launch showcase by the nothing short of excellent Orient Machine. I say pre-album as all best intentions fall by the wayside.. This should’ve been an album launch night, or at least a single launch night, but when you’ve got something as good as Orient Machine’s debut album to release then it shouldn’t be rushed for the sake of a gig.

A day in the studio laying down vocal tracks on the eve of a gig was perhaps not one of Dave Morait’s best decisions, as he sounded only an octave off Lee Marvin doing Wandering Star. The gig, and his voice thankfully survived with the help of Mr Jack Daniels and honey. 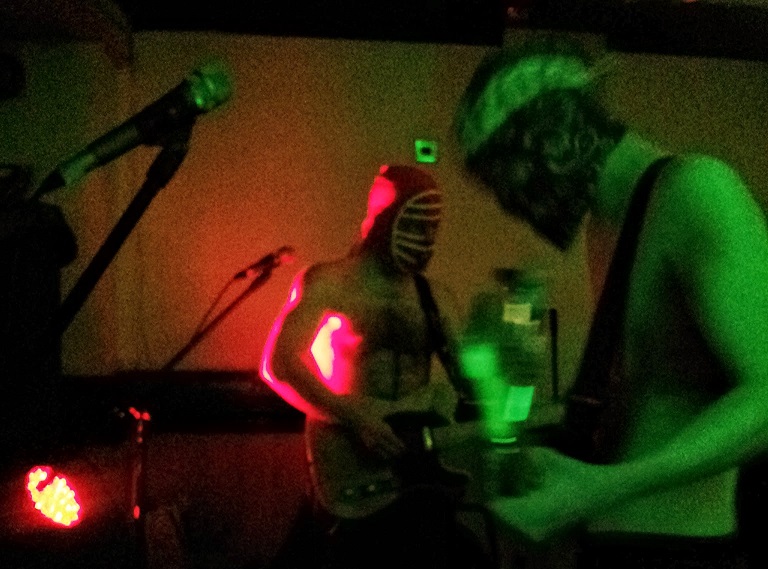 Before the main event we had the sideshow of Secretaire; exiled North Walians currently picking up dog-ends in the rain on the streets of Manchester. The Gintis entourage vomited spicy faggots after a grub crawl and stumbled into the venue to see their old sparring partner Joe Gintis on drums and ex Der Bomber guitarist Carl O’Neill.
Chuck in Manc Lad, Jez Budd on bass and you complete a line up, who on stage, in their Kendo Nagasaki wrestling masks, create a guitar fuelled sideshow circus that is fucking bonkers, off kilter and VERY LOUD!
Ted, (he of) Cloud Sounds (Radio) said, ‘”If Secretaire had the right contacts, every promoter in Manchester would be jizzing in their face right now. They don’t, so they won’t.” Which is completely true… They do the odd gig every now and then; and like Gintis will probably go down as perennial under-achievers… Which, let’s face it, is a crime. 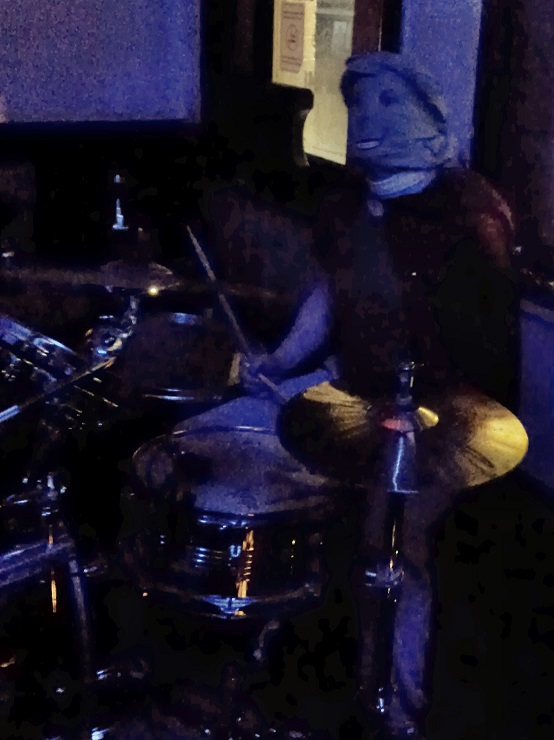 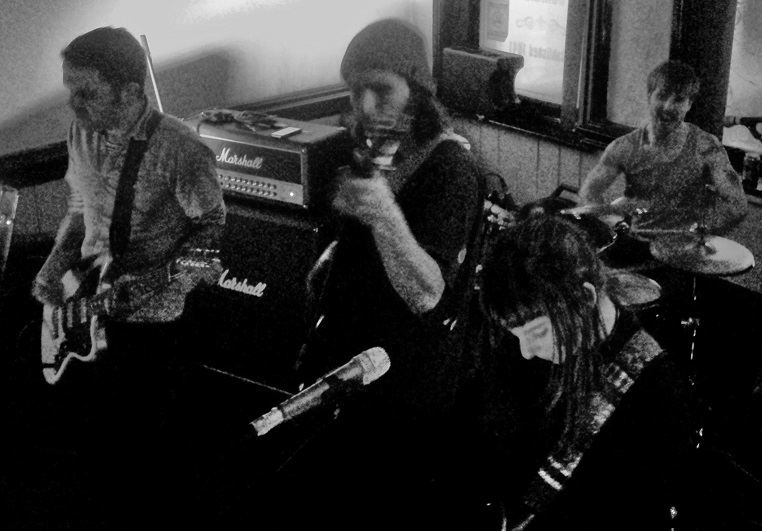 With the very slight Jess added to Orient Machine‘s line up, making them a four-piece, this is their second gig as such; although Dave is quick to point out the first was a christmas bash and pretty festive, whereas tonight is going to be a full on assault. With a folk-singer background, Jess soon proved that looks can be deceiving, as she, like the rest of the band certainly pack a punch.
A change from the script was neccesary because of Dave’s vocal chords being dragged on gravel behind a pick-up truck. This meant Orient Machine’s intended smash you in the face beginning, a calm middle and a nuclear Armageddon to finish was going to be re-jigged.
A calm start was now on order, building up to the holocaust at the end, and as the song progressed, I scanned the packed room and wondered…  Is Wrexham anticipating something? Are we anticipating something? Yes we are… it did start calm enough, nice feedback, nice build up, Dave seems excited, Jess, Andrew and Jason seem excited, we’re all excited… BANG – it smashed all your senses into smithers. If they called the opener a calm start then we were in for one helluva ride…

Earlier I talked to Dave Morait about stuff, about the numerous bands he plays and has played in (We Are Animal, Gallops), but it’s evident that Orient Machine is his baby. He loves his baby… We all love his baby. Their nearly finished album is to be preceded by a single How Many Times, which ironically, or coincidentally sounds very We Are Animal-esq, 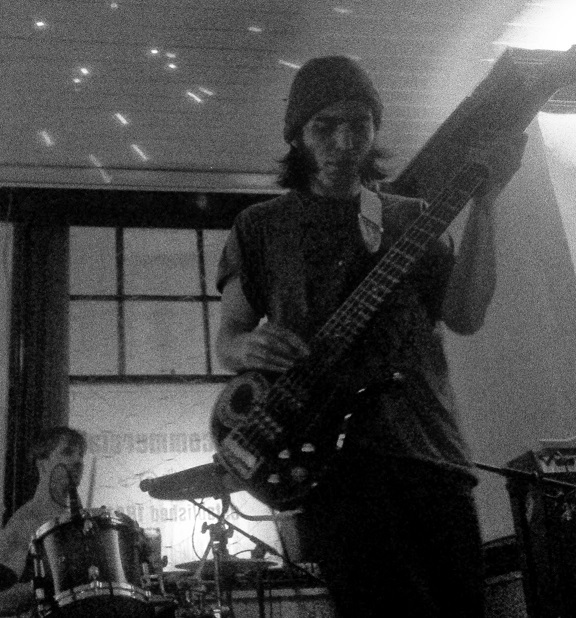 Secretaire had gone on early to appease those of the Gintis crew in need of getting a train back to various locations, thus ensuring a sizeable proportion of the populace were not going to see their performance. By the time Orient Machine were on, this little backstreet pub was awash with such an eclectic crew it was like a Noah’s Ark of gig goers.
Wrexham is, at the best of times, like the Wild West, and tonight was no exception… Every misfit known to man (and David Salisbury :)) is here tonight, adding to a great atmosphere; be they dodgy bikers, hairy ones, hen parties, indie kids, alcoholics, druggies, fuckheads, farmers, ageing punks, tramps, pensioners, whores, pimps, drag artists, wrestlers, and horror chics – and that’s just the bar staff!

Orient Machine swing from being subtle to smashing the living fuck out of a song… Nothing flows, it blasts, it stabs, it haunts, it dances then explodes in your face. This is incendiary music, the backpack bombers of rock, this is anti-metal.. It’s also your future… Embrace it now… You have no choice….