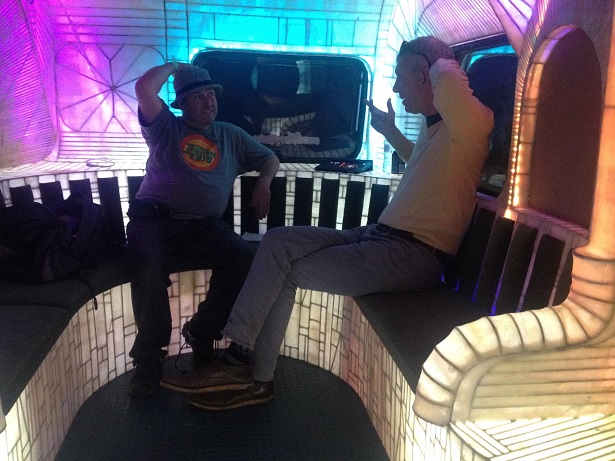 Meeting up with Martin  of 9Bach at the Green Man festival, we eschewed the plain white press gazebo and opted to conduct our conversation in the shimmering ambient colourwash of the Tripsy Caravan..
This interview is best read under psychedelic lighting conditions…

Dewi: Well I’m joined in the Tripsy Caravan by none other than Martin Hoyland from 9 Bach – just in and looking quite fresh faced after playing a ridiculously early Sunday morning show on the main stage of the Green Man Festival.
Martin: Yeah I know I’ve been here since 9 o clock in the morning!

D: At a festival too!  How do you psych yourself up to go on stage at a time like that?
M:  Same as normal really – I had loads to drink last night that always helps! I just shifted everything forward crashed out after Match of The Day got up at 5, drove down and met Lisa who was already here. [Lisa Jen his partner and lead singer in 9Bach] we had a massive breakfast in the Bear Crickhowell  which set us up and got here for 9am. You think why do I have to be here so early and then suddenly it’s midday and you’re on.
It was nice to see people there at the start and that built up as we carried on.. Thank god it didn’t rain!

D: It was great to see you on the main stage too, nice to have a bit of a bop to the songs for a change – the  songs seem to really grow and get more powerful when you play somewhere like this don’t they?
M: Yeah we like  playing clubs and theatres and some are really vibey but you get a space like this and there’s more to project to. You can get freaked out by it and go small or just think VOOM and go for it, – it’s a mistake to spread out on a big stage, we deal with it by making sure we stay tight and close together – if you spread out  too much you’re not communicating. 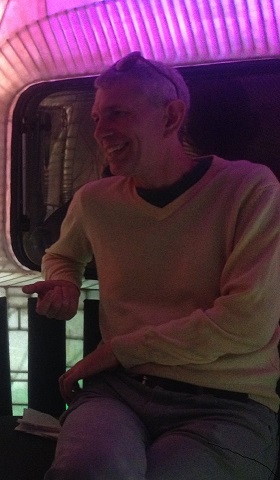 D: There’s been an amazingly positive response to the latest album ‘Tincian’ – it must be really gratifying to be recognised like that, especially as you did it  all on your own terms – having the album completed before you started looking for a deal.  Are you surprised with how well it’s worked out?
M:  It’s all been a bit of a blur to tell the truth. You dont get time to stop and think about it but when you do; fucking hell yeah it’s amazing. Making a record is such a long process and you end up investing so much time in it. The recording process is great but the mixing is hard. You’ve got to put your “work” ears on and because with us we make it so sparse we end up taking loads of stuff out rather than the other way round. When the album is ready to come out you’ve lived with it so long,  you believe in it so much that you daren’t think about what the press or the critics are going to say.
We had no expectations really and when the good reviews start to come in, without  trying to sound too big-headed about things, it just reaffirms what we already thought about it
It’s hard being a musician you know, you take a lot of knocks and I’ve been in some bands which didn’t quite work and didn’t have that belief in themselves. But it’s different in 9Bach  and the response has been far better than we could have expected – from mainstream media,  online reviews, underground press – even the Financial Times – where did that one come from?!
In the early days we took a lot of flak in Wales for not being a “proper” folk band – although we did an album of folk songs we weren’t seen as being part of that folk tradition. We  suffered early on  – we were a little bit folk, a lit bit world, a little bit dub, a little bit indie, a little bit rocky so when it came to airplay people would say “you’re not folky enough” or “you’re not rocky enough” or whatever, and now it’s come round full circle and we play a folk festival, or at a world festival or at an indie festy. It works at all of them so now it’s a massive bonus to cover all those bases. Not that it was deliberate mind, we just do what we do.

D: What struck me seeing you today is that 9Bach really is a band…
M: That’s important. We always wanted it to be a band even though it starts from me and Lisa doing the music. When we play, everyone gets  a say and everyone’s contribution is important – if you lost one person it wouldn’t be 9bach. And they bring so much – Esyllt, our harp player is so sensitive to the vocals and she does it in a way that most harp players would find really difficult. She has that minimal stuff off to a tee. The rhythm section works really well too and the voices blend so well together.

D: You’ve been touring loads over the Summer – weren’t you recently in the Czech Republic? And how did the WOMAD festival go?
M: Yes we were at the Colours of Ostravia Festival; crazy! A Welsh band travels to England catches a plane to Poland then travels over to the border to the Czech Republic! In the end that was the easiest way of getting there. We got an amazing response  – a standing ovation probably one of the best ones we’ve had inside a theatre – and ironically there is less of a language barrier in places like that.
WOMAD was great too – we played a few times over the weekend and ended up doing a session at their cookery stage Taste the World. Lisa did Welsh cakes, and proper Welsh rarebit with larverbread, beer and mustard, I wanted to do my veggie breakfast bloody mary but they reckoned it wasn’t Welsh enough!

D: So what’s next for 9Bach – are you getting the chance to write new material? I hear you’re doing a project for the launch of the new Pontio Arts Centre in Bangor?
M: It’s difficult  – you’ve got to wait for the ideas to come – you can’t just release an album, go on tour and then expect to write a new one because your head is still where you are in the here and now with all the stuff you have to deal with. We don’t get much space  to oursleves, we live full lives and have two young children. We went away to a cottage to write the last album. That worked really well – no internet, no phone signal – we’d go for walks and whatever we came across Lisa would write about it. It was brilliant.
The Llechi [slate] stuff we’re doing with Pontio; it’s a natural progression for us. A lot of ‘Tincian’ is about Bethesda and the countryside where we live and songs like “Llwybrau” and “Ffarwel” were very much based on the slate quarrymen’s stories. So when Elen from Pontio asked us, it seemed right as we were doing that sort of stuff already.
Lleuwen Steffan is involved and Ieuan Wyn doing poetry, Cor Penrhyn [Male Voice Choir] too.

D: That’s brilliant to hear, “Ffarwel” the track they sing on ‘Tincian’  is a great moment on that album.
M: It worked so well. We talked to Arwel Davies the musical director and his brief was make it weird, not a standard male voice choir backing. He came back and said I hope “that’s not too weird” and he said “it is… it’s perfect!”

D: I was listening to an interview you did on the excellent Shed Podcast with Mark Coles and heard that another track on Tincian “Llwynog” had become the source of an internet controversy?
M:  That was a bit mad. We were in Q magazine and they tweeted  a link to a performance of the track. We’d written it after seeing the corpse of a fox strung up near to where we live. It affected us and Lisa just wrote a song – we’re musicians it’s not some big political statement. Anwyay some farmers kicked off about it and tweeted everyone back saying “9Bach this is the work of the llwynog (fox)” and linking it to a picture of a dead sheep.

D: So are they picketing your gigs now?
M: No, we’re just not letting farmers in!
(NB: this was a joke before anyone gets the wrong end of the stick!)

D: So how does it feel playing at a big festival like Green Man. Lisa mentioned  that you’d formed to come and play here nine years ago?
M: Well when me and Lisa met and started going out together – one of the rare occasions I was actually cooking for her round at my house. I was on a bad deal that night as I was washing up too.
She was finishing the wine in the living room and I just heard  this beautiful singing. I ran through and asked “what was that ?”-  she said “oh just some old Welsh folk song” I think it was Lisa Lan or something. At that stage I didn’t even know she could sing so I got my guitar out and said sing another. So after that we kept going – it was just a hobby at first – I’d been in loads of bands but had had enough of the rock n roll experience and hadn’t really played much guitar for a while. It was great to play just for fun.
My mate Ali, who’s now our drummer, rang me up to see what I was up to and I mentioned that I’d just started playing again mucking about with Lisa. He was friendly with the Green Man organisers and it was their second year so he gave them a shout and they invited us over. Being a festival in Wales they were keen on featuring some Welsh music. So without thinking we said yes and then put the phone down and had to think what did we really want to do with all this?
We  decided we wanted to really fuck it up – solo guitar and vocal is just too folky. So we got together the line up of musicians who still play with us today and played the festy. It went really well and after we played this guy came up to us and said “hey man your set was amazing – can I have one of your CDs?”. We told him it was our first gig and had to apologise that we didn’t have any unfortunately. Someone came up to us afterwards and asked if we realised we’d just been talking to Bonnie Prince Billy!  Should have got his email or something – So yes,  all this time later it’s a nice feeling to come back and play here again. 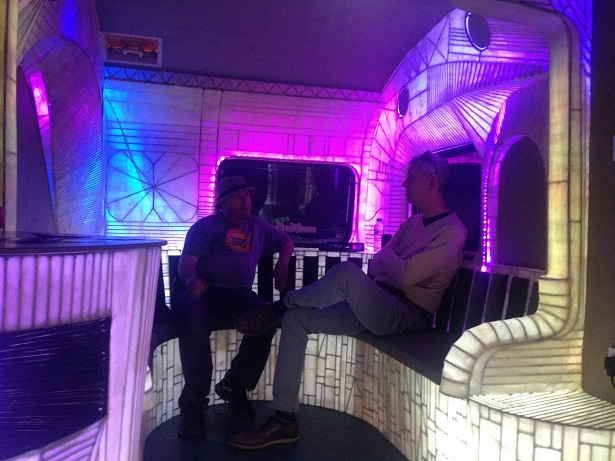 Tincian is out now on Real World Records. The Llechi project with Pontio has been postponed because of delays with the building. Hopefully it will be rescheduled to a later date.

For more information on 9Bach check out http://www.9bach.com/

The Tripsy Caravan is available for festival hire and provides a wonderful atmospheric space for acoustic performances, interviews, VIP backstage facilities and chill out space.