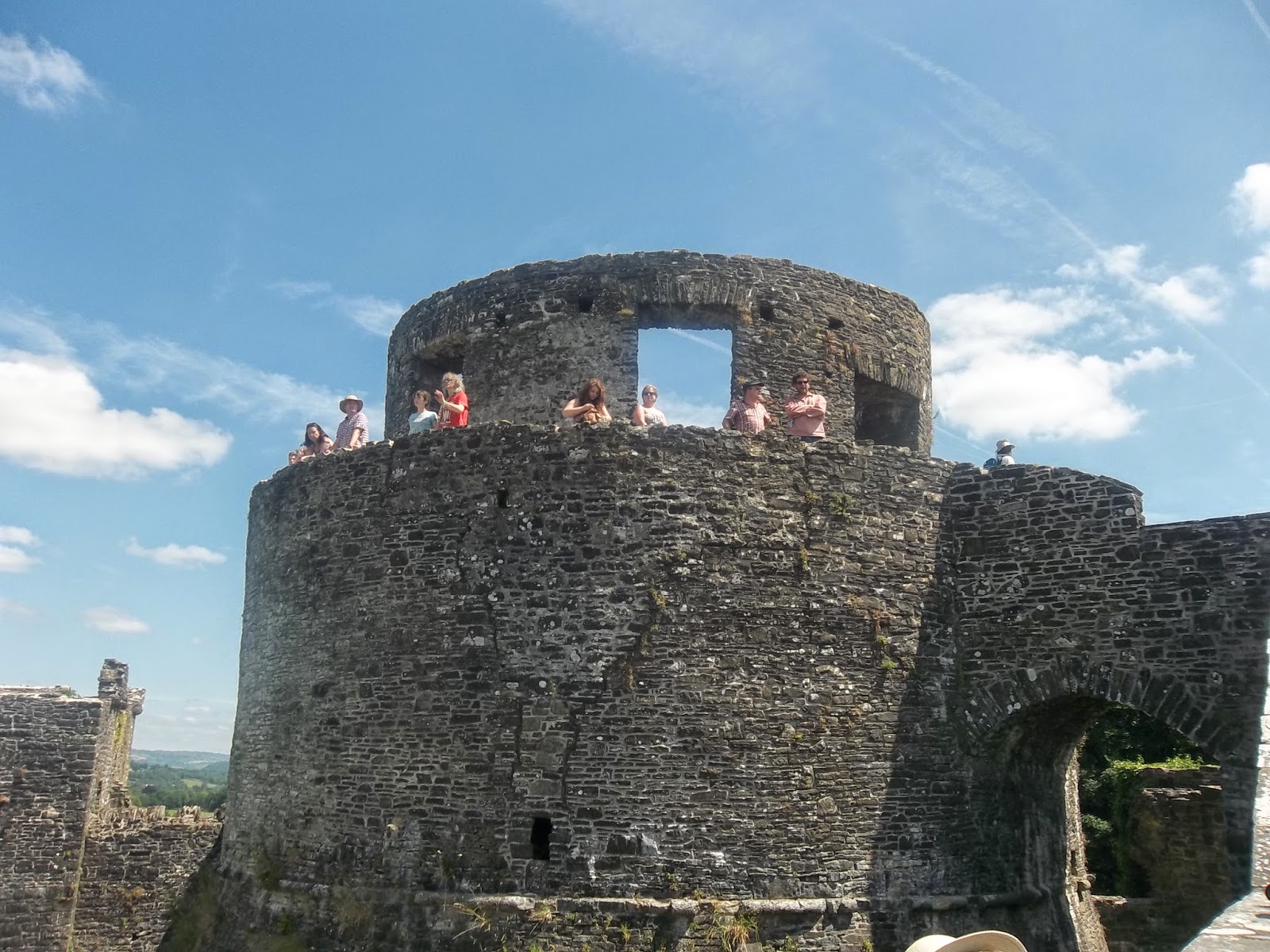 My ‘gig’ at Gwyl Lenyddiaeth Dinefwr was to lead a walk up to Dinefwr Castle, medieval home to the Princes of Deheubarth, Arglwydd Rhys, Rhys Gryg etc Technically this ‘gig’ was tour guiding rather than a performance although I do tell some stories and certainly my tour guiding includes an element of psycho-geography. But my point here, is that probably for the first time in recorded history, a tour guide got to support Gruff Rhys – now that’s pretty cool and one for the CV !

I also have to thank Literature Wales for describing me as ‘Legendary Punk Rock Musician, Antiquarian and Author’, which I have now used plagiarist style for my twitter account. All true by the way except for the bit about being a musician.

The walk up to Castell Dinefwr is well attended, surprisingly so in one sense, it’s 11-30am on a Sunday morning, but probably best time for a walk – get everybody fit and healthy before they sit down and listen to some serious poetry. I start with the two Roman Forts within Dinefwr Park, talk about the A40 and the road to Moridinum (Caerfyrddin) and give them a sense of geography – where are we? I mention context a lot – this is important.

My “talk” is mainly in Welsh but we do bi-lingual commentary easily enough for the half-dozen or so non-Welsh speakers who tell me they follow quite a bit of the Welsh commentary anyway. We do not spot the White Cattle on our walk up to the castle.

We have a lot of fun, a few of my poor jokes about ‘holiday homes’, the first Eisteddfod being at Deganwy Castle under Maelgwyn Gwynedd rather than at Aberteifi under Lord Rhys just to wind up the Llandeilo posse and we talk about William Marshall’s round tower at Pembroke before dealing with the 17th century summerhouse on top of Dinefwr keep.

Gwyl Lenyddiaeth Dinefwr deserve a huge thanks for sticking this on the programme – a bit of history !!!! And of course, the usual story, so many had never been up to Castell Dinefwr before – job done !
Happy historians : 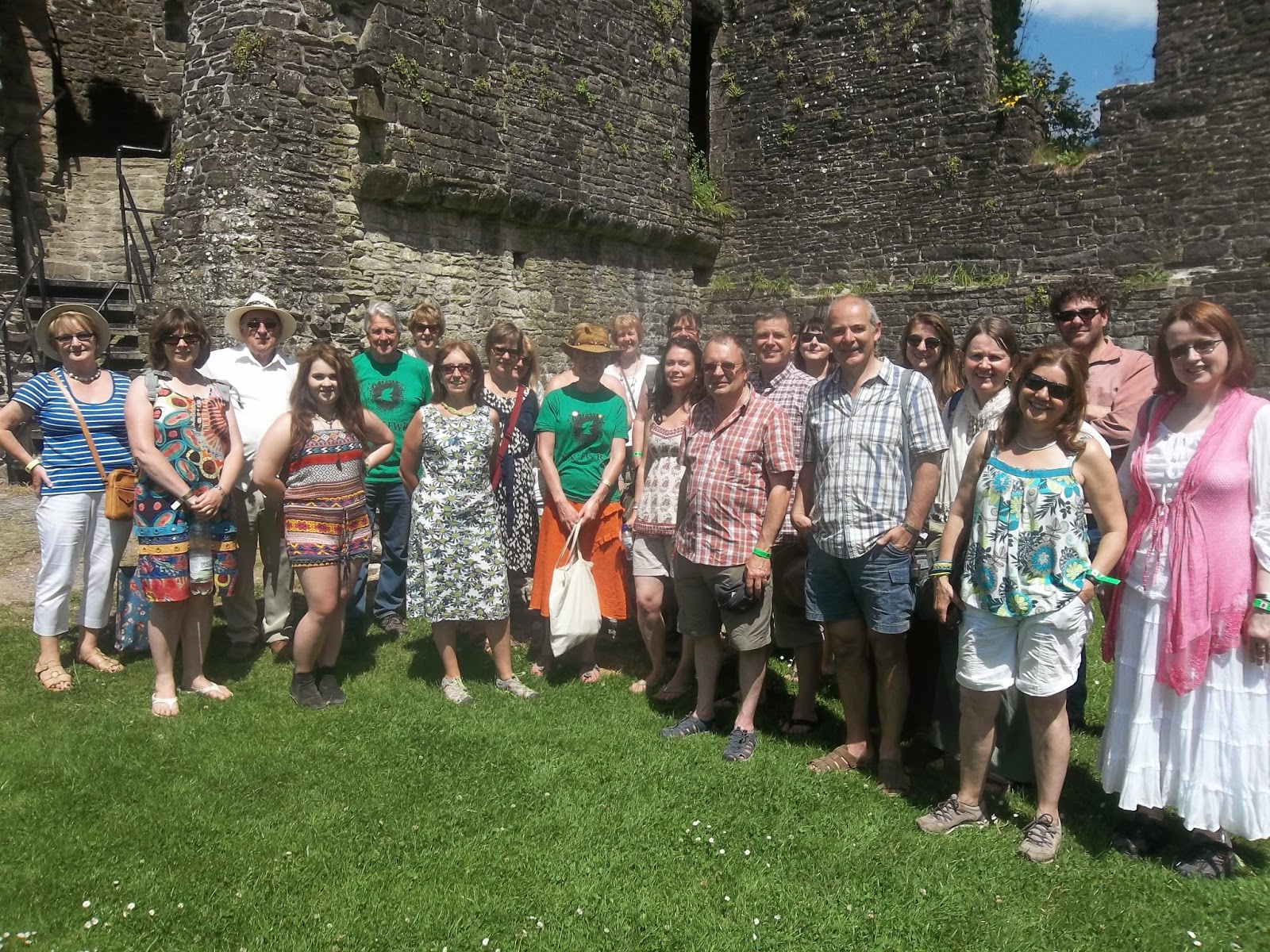 Next stop was a bit of lunch and we check out the BBC Horizons Stage. Now this is probably well intentioned, great idea in one sense and certainly good to have a music stage at Dinefwr. But, there is a BUT, and having talked to a couple of other people I was not alone in thinking this – I am not Mr Controversial for the sake of it, and I think the Welsh twitterati types will probably disagree but I got the impression that some of the artists probably needed a bit more development before being thrust into the limelight so early on in their career.

Front covers of Welsh language magazines, endless media coverage / hype (and even Can i Gymru – Song For Wales – for some of them which is never the best or coolest of ideas) is too much too soon. Think of why Cool Cymru worked so well? Because those bands learnt their craft before going on Top of the Pops – by playing small venues – the TJ’s circuit if you like, and learnt to play and perform before hitting the next step on the rocky road to fame.

I was slightly disappointed / concerned – concerned that the BBC have the audacity to ‘select 12 bands to promote’ thereby leaving all the other talented artists out there to sink? I’m concerned that maybe no one is out there to advise these young artists – as I said I was not the only one, I spoke to journos and fellow managers about this and they all felt the same – I felt less guilty.

I do get to meet Y FFUG and that cool-young-thing that sings for them – it was a meeting of Punks – I do like them despite my semi critical review of the EP. I think he knows …… I tell him not to compromise his art to please the Welsh intelligentsia. My tweet of the picture gets a ‘like’ from legendary Scouser and Mighty Wah, Pete Wylie…. 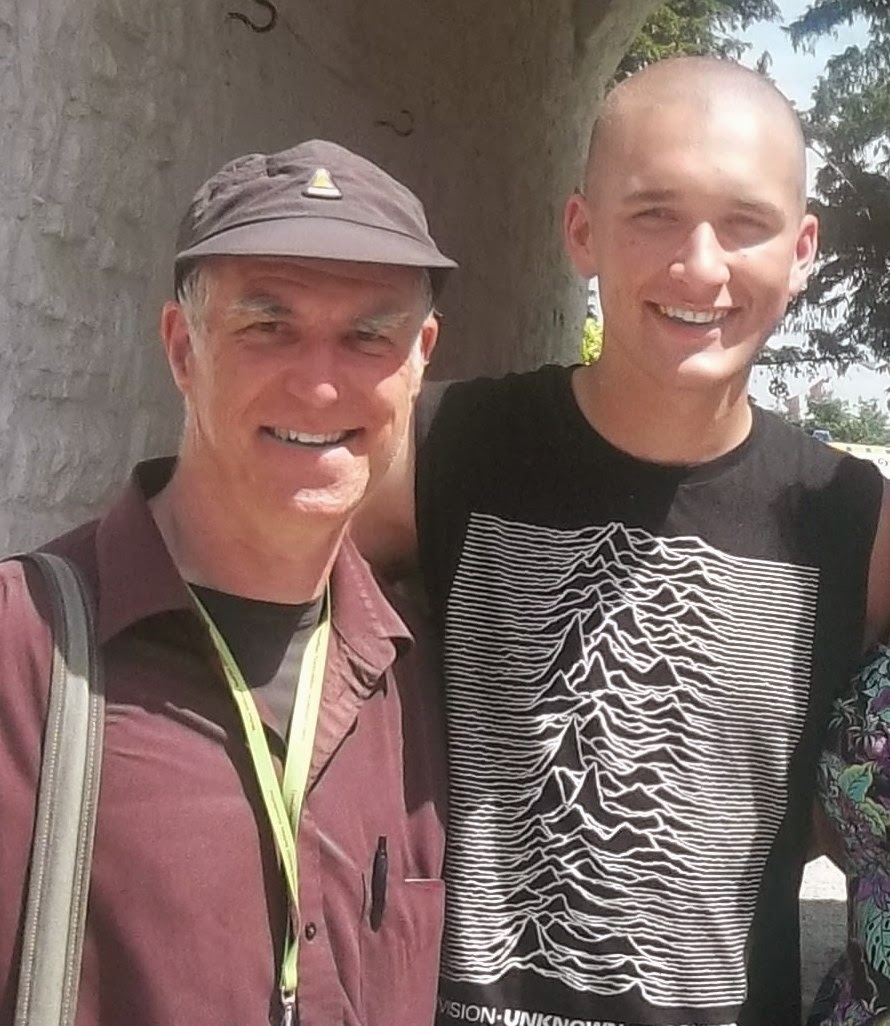 The fact that these young artists are OBVIOUSLY HUGELY TALENTED is not being disputed – it’s the fact that we are asking too much of them too soon. I am the concerned parent ! 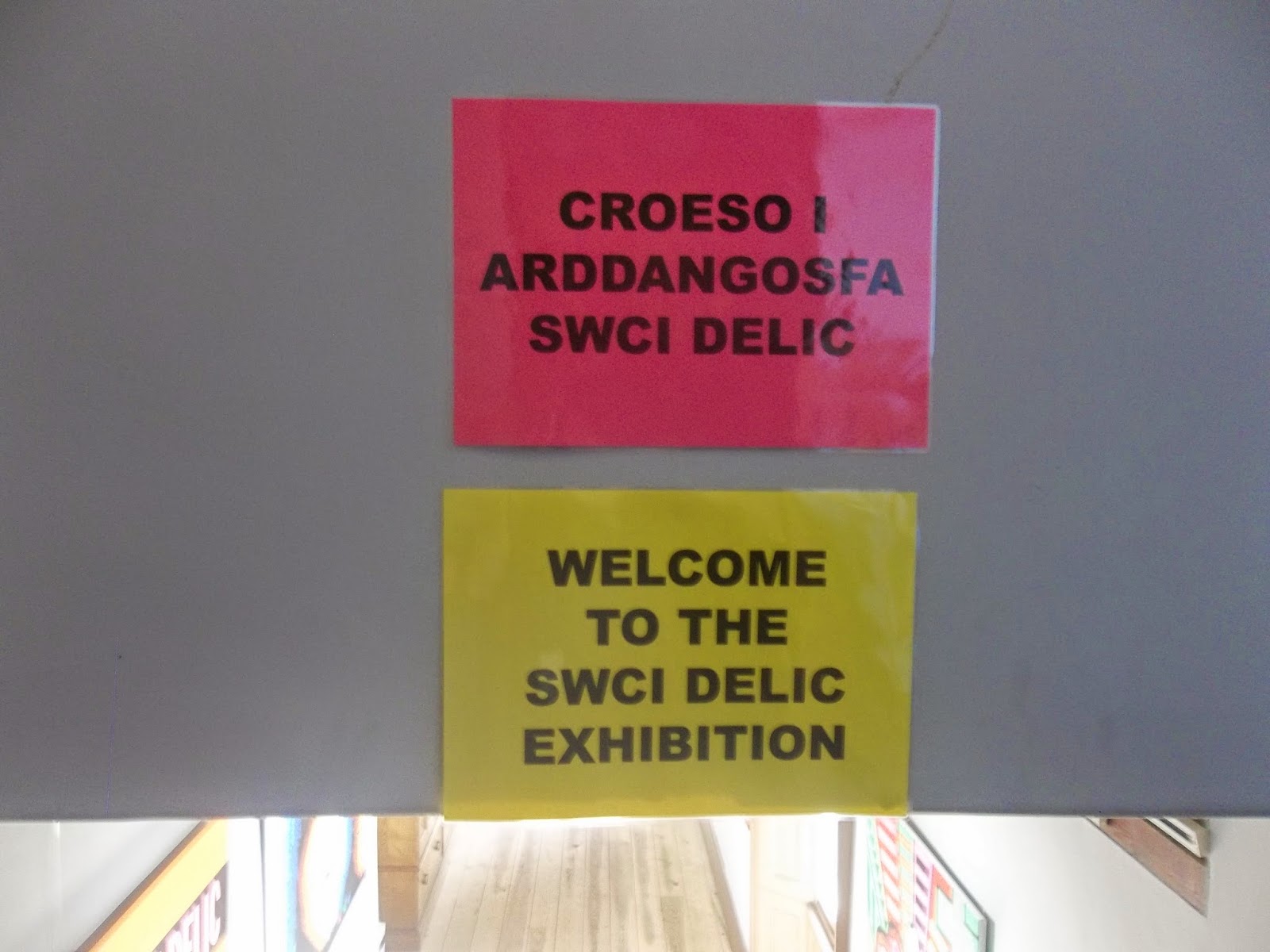 Slightly off the beaten track (down a corridor in Newton House and a bit hard to find / stumble across) was one of the highlights of Dinefwr, the art exhibition, all Warholian and colourful by Swci Boscawen, one time lead singer of Welsh Punk band Doli, then solo star as Swci Boscawen, now bonafide artist (visual). I loved the cushions and consider ordering some for my office. I did not intend using such wonderful cushions later in the day for sitting on to watch Gruff Rhys. 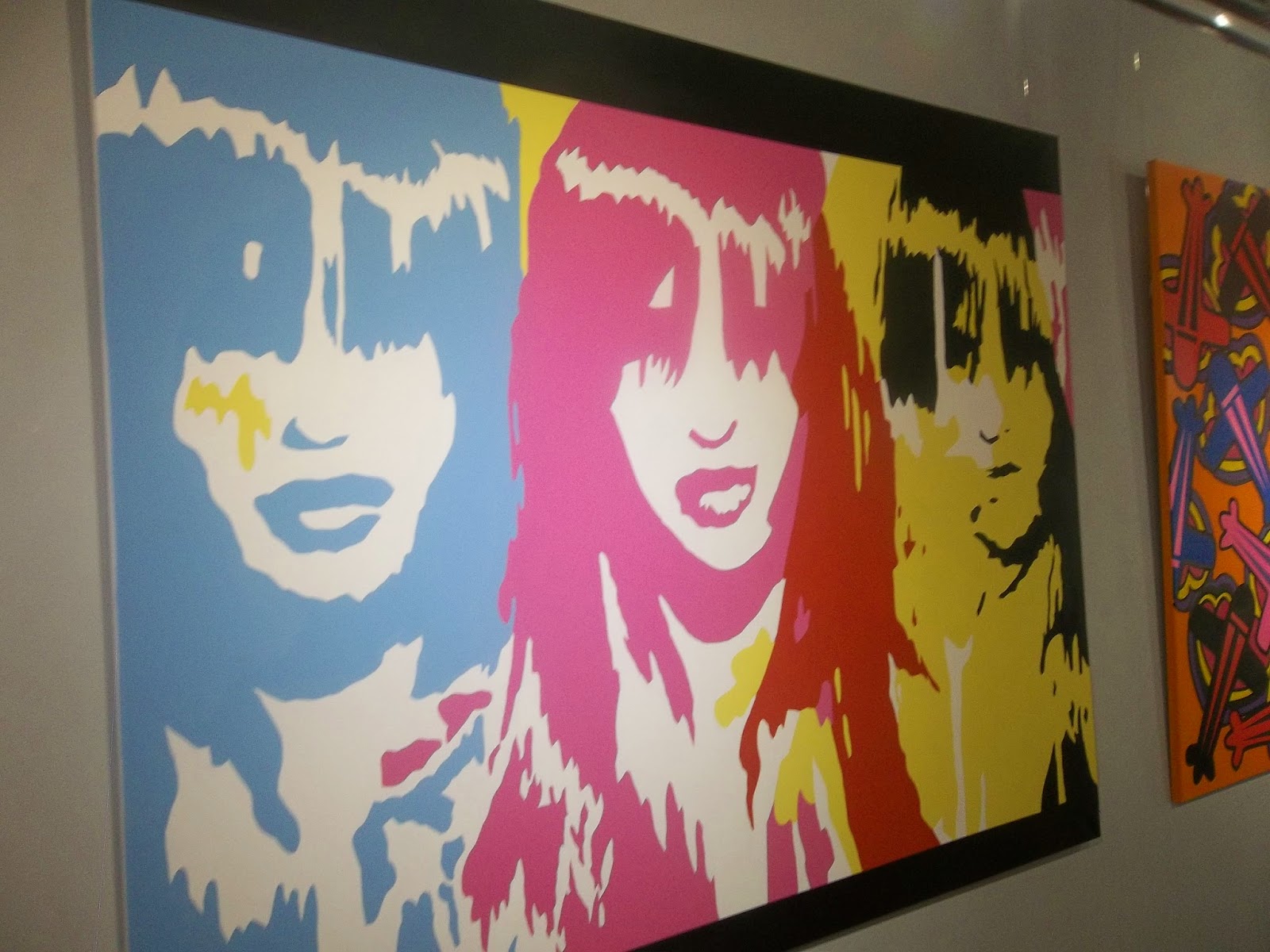 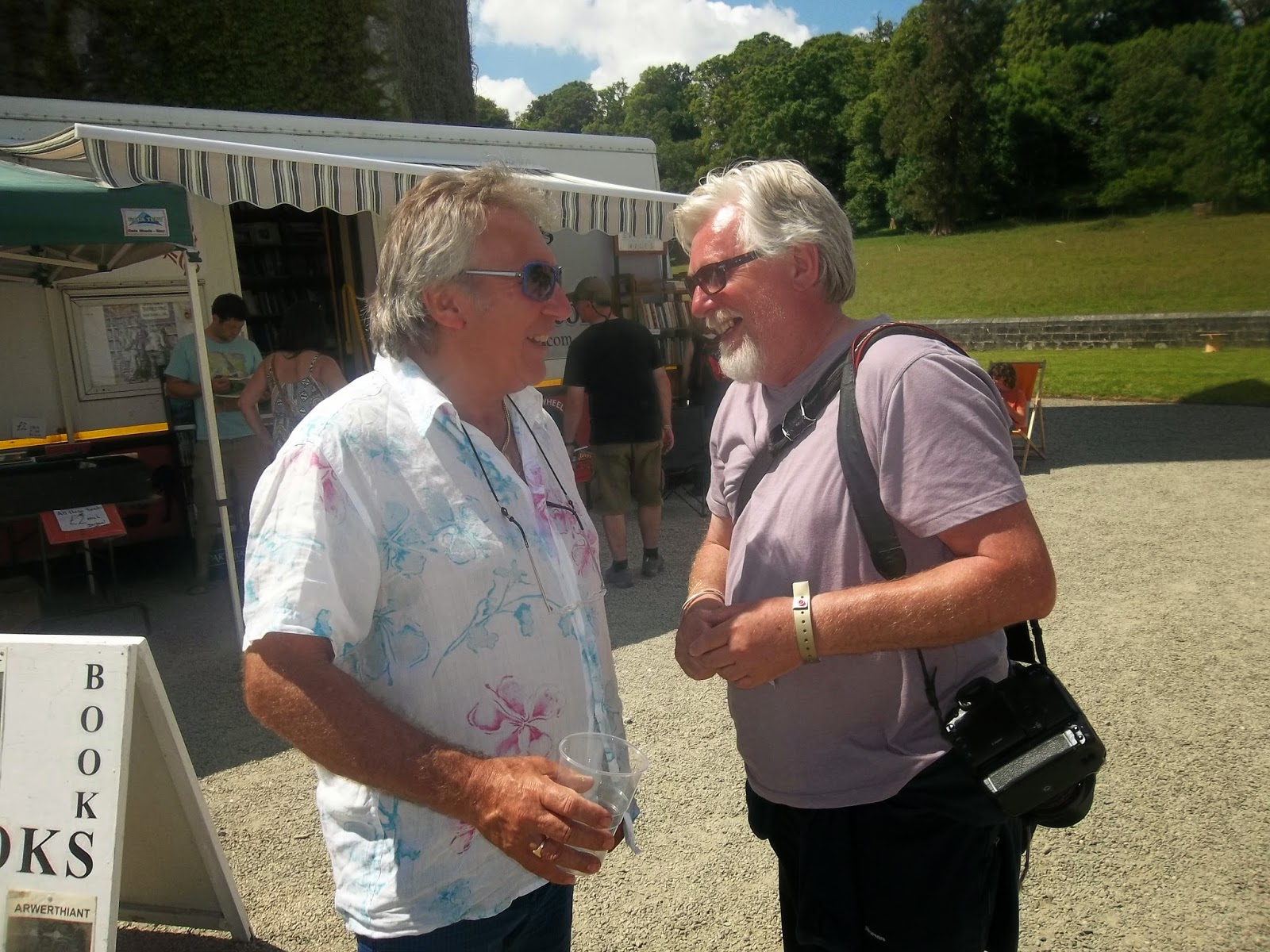 So it’s time for Gruff Rhys, American Interior – I have a quick chat with managers Alun Llwyd and Kev Tame and then head off to try and find a seat in the overflowing tent. 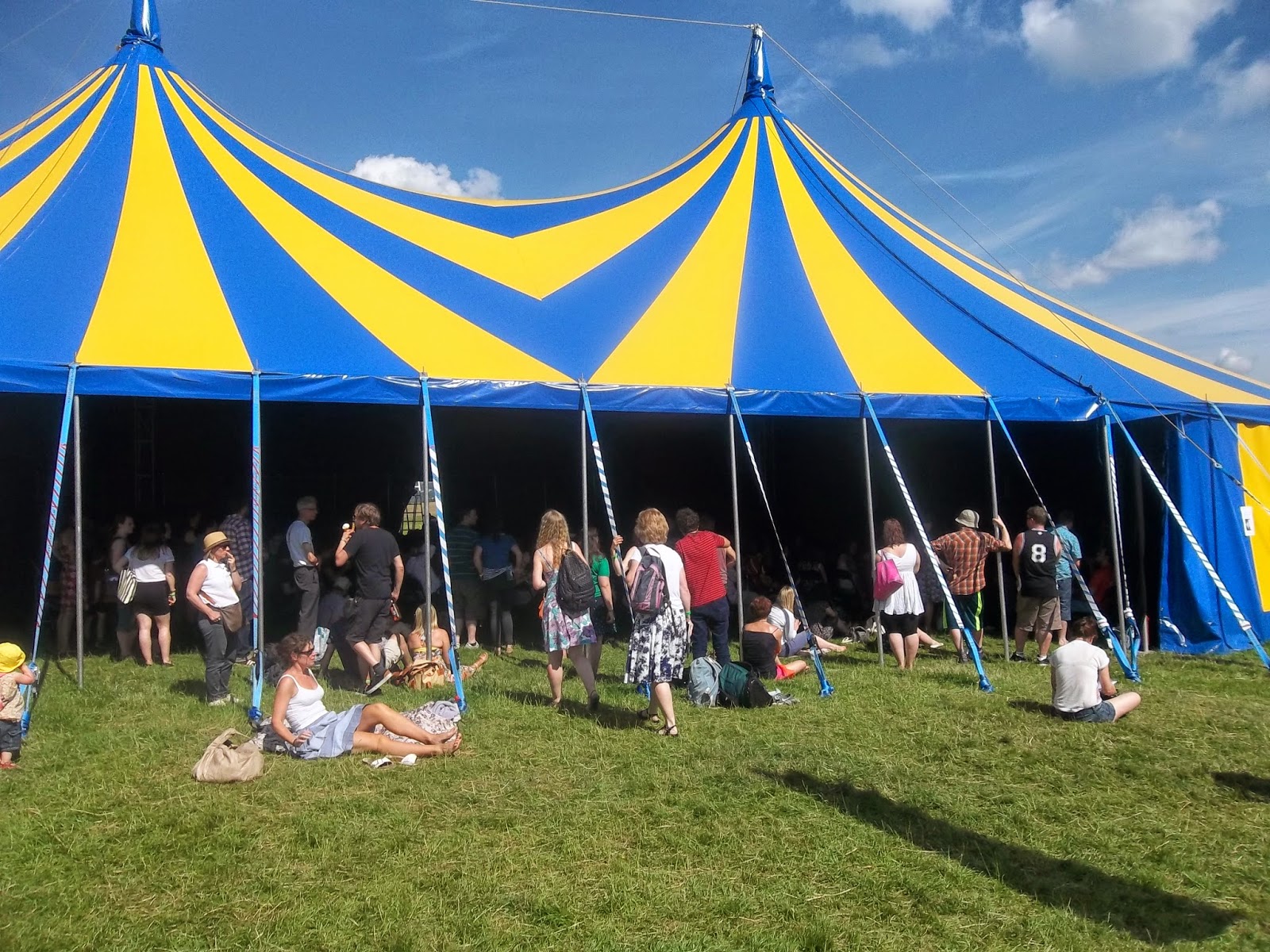 Now this is really interesting, it’s almost more of  a conceptual art happening come historical lecture than a traditional Rock’n Roll gig. Gruff Rhys presents us with  visuals (got to be seen really to make full sense)  about John Evans, from Waunfawr in Eryri / Snowdonia who under the dodgy advise of Iolo Morganwg goes in search of Welsh Speaking Native Americans in the 18th century.

What a story ! and trust Gruff to get this ! Brilliant, quite brilliant. This is another form of psycho-geography. You realise how close Gruff is to Bedwyr Williams – even down to the black suit. We do get a huge amount of Welsh History. 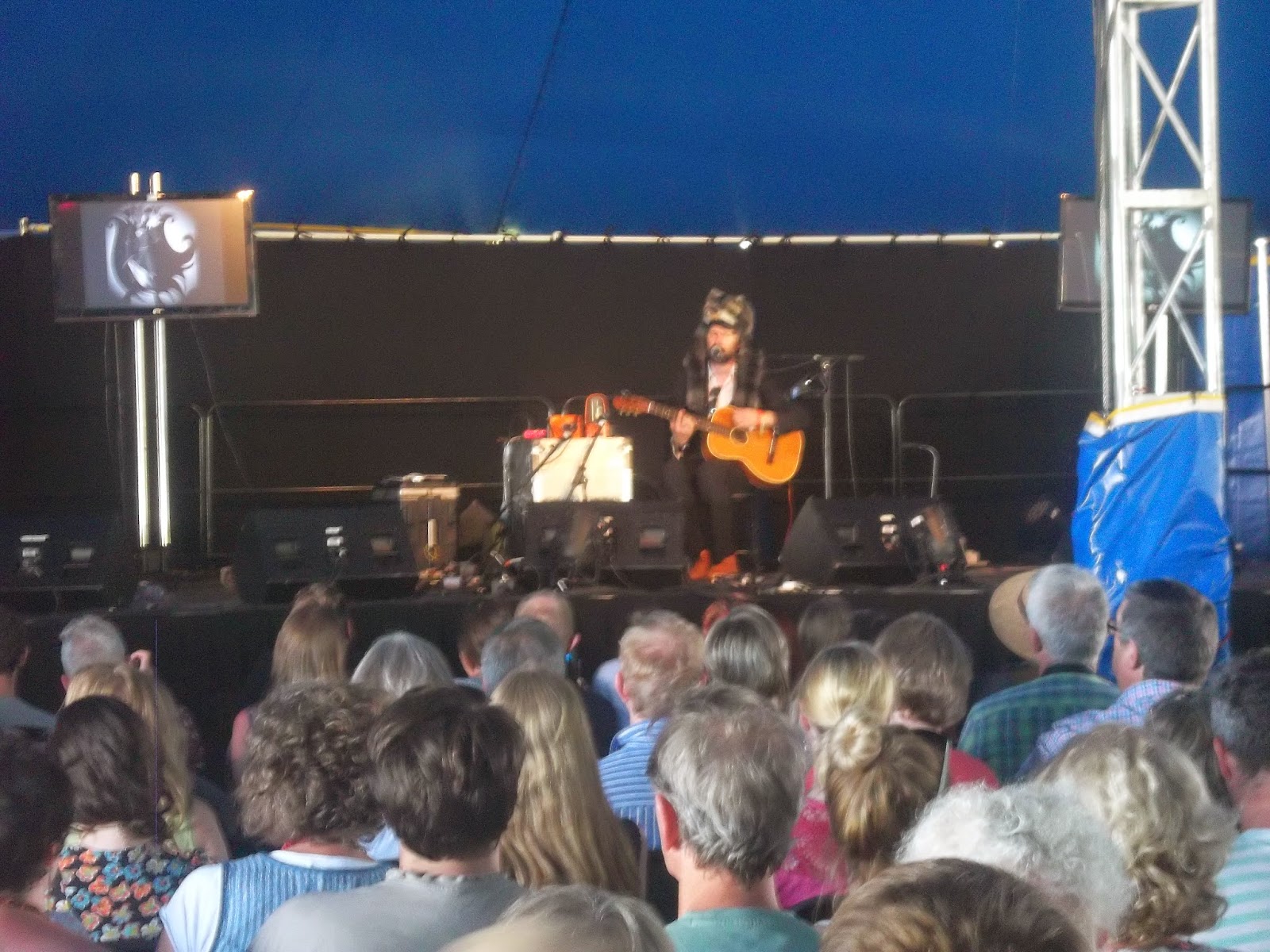 The introductory film with Gwyn Alf Williams which they have found from somewhere, with Philip Madoc on narration, inspires but does wrongly suggest that Madog, son of Owain Gwynedd was born at Dolwyddelan Castle. If Madog was born at Dolwyddelan it would have been at the earlier nearby site of Tomen Castell, a motte in the Lledr Valley – also possibly / probably  the birthplace of Llywelyn ab Iorwerth (Llywelyn Fawr).
It was Llywelyn Fawr in the 1220’s who built Dolwyddelan Castle – therefore his “uncle” could not have been born there. Hmmmm, not too sure here I must confess …. but a great story ….. 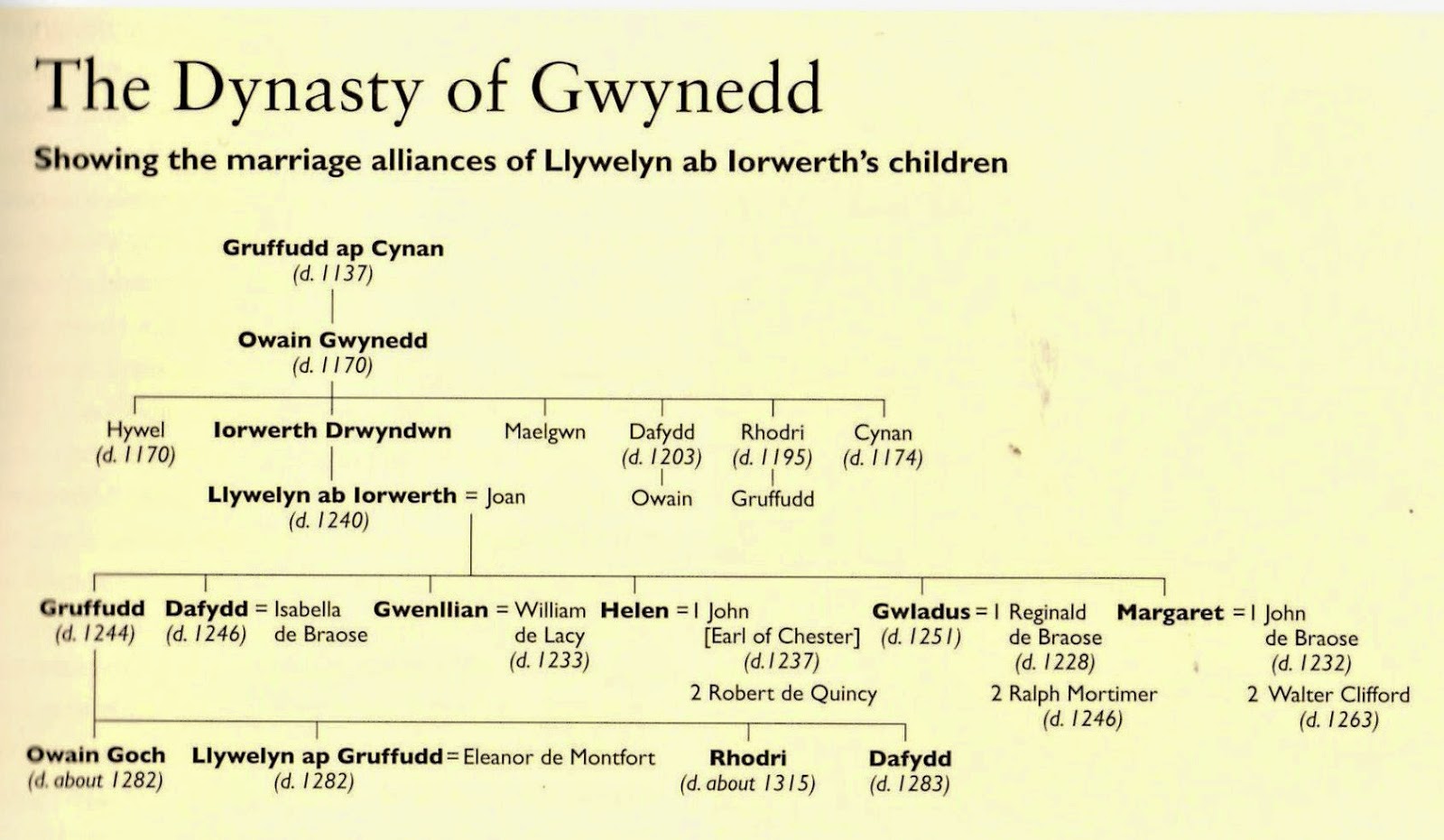 Musically Gruff is on fine form. I have never heard him hit the high notes so well – this is Gruff Rhys in fine voice – comfortable, surprisingly articulate – the tunes of course are just that – great tunes.American Interior the title track is a great pop song and we get a 2 hour show which is part lecture / part great pop songs all done pretty well acoustically with a few vinyl records for sound effects.

Gruff is really funny – this also makes him a great raconteur – he has a political edge, which is delivered with humour. His parting shot of ‘Tax The Rich’ is worthy of Class War / Rock Against The Rich but at one point when he mentions that John Evans gets to work for the Spanish Government looking for a route across America to the Pacific, Gruff cites this as another example of the Welsh language helping you get a job. Classic.

The mind set here is pure Bedwyr Williams. This is the artist in Gruff coming out, not just the Super Furry rock star.

I attended a talk or rather Bedwyr Williams in Conversation recently at Mostyn and Bedwyr presented us with probably the most shocking statement in the art world that I had heard in a very long time. Bedwyr compared the English language to a Ferrari and the Welsh language to a Vintage Car with the artist being told how to drive by the passenger. If I understood Bedwyr correctly, he does not work through the medium of the Welsh language for fear of the Welsh Intelligensia. Doing what exactly? Correcting his Welsh grammar?
If, IF, this is the case  the shame on us all for allowing this to happen, shame on the Welsh intelligentsia, and Bedwyr is a member of Gorsedd y Beirdd – the Welsh elite, if there ever was a Welsh elite. So what’s the point ?

Actually, that’s another question I ask myself occasionally (not that often) – what exactly is the point of the Gorsedd – beyond Iolo and Cynan and fantasies of a rather suspect Victorian kind? I’m currently reading Fiona MacCarthy’s ‘The Last Pre-Raphaelite, Edward Burne-Jones and the Victorian Imagination’ and she touches on some of the Victorian attitudes …. it’s interesting if slightly uncomfortable stuff at times. 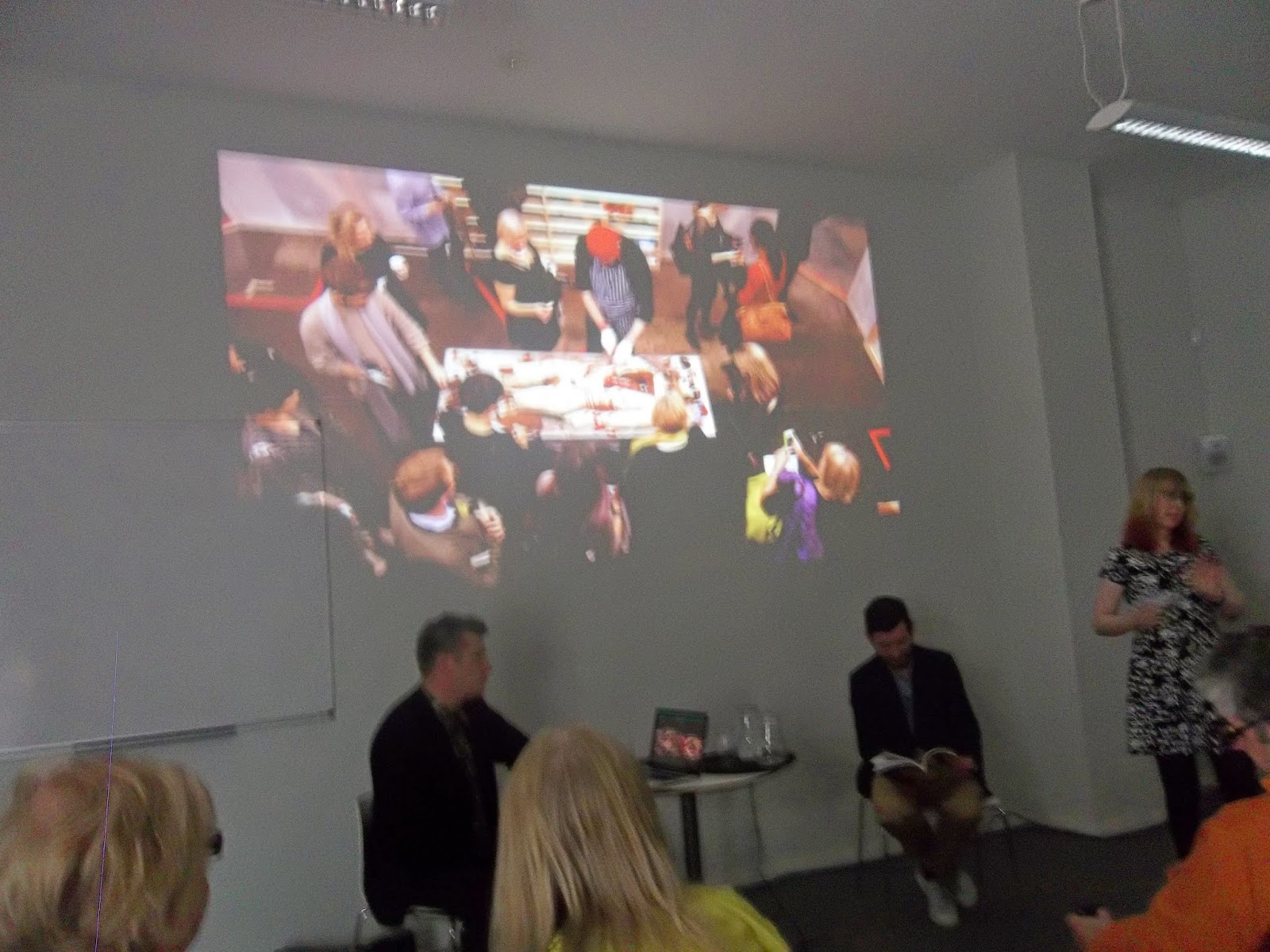 So maybe we should have Bedwyr and Gruff in conversation – the meeting of minds, the two artists, without doubt two of the greatest Welsh Visionaries of the 21st century. Gruff does most of his talking in Welsh, he is not afraid, we are in Wales, no-one objects or is even slightly bothered. He does bilingual rather well. For Gruff this is a VERY articulate dude on stage. Knowledgeable and passionate, interesting and crucially – funny!

It does concern me that Bedwyr does not / can not create in Welsh, but also I passionately believe that an artist should do exactly what they want to do. In that sense I cannot fault Bedwyr’s art – he is without doubt a genius /visionary. As is Gruff Rhys – but Rhys will at least storm the barricades.

It’s interesting with Gruff Rhys, because he is the darling of the Welsh scene, he always has been since Ffa Coffi Pawb days and right through Super Furry days. To that extent Rhys is also restricted. They love him, they agree with his every word, he is a revolutionary but the audience I suspect are not.

On the Friday, David R Edwards had given an edgy interview with the BBC’s Huw Stephens. They love Dave these days too, not so back in the day when Datblygu truly stormed the barricades. What becomes of us all I wonder, one time punks now given slots in a Literature Festival? 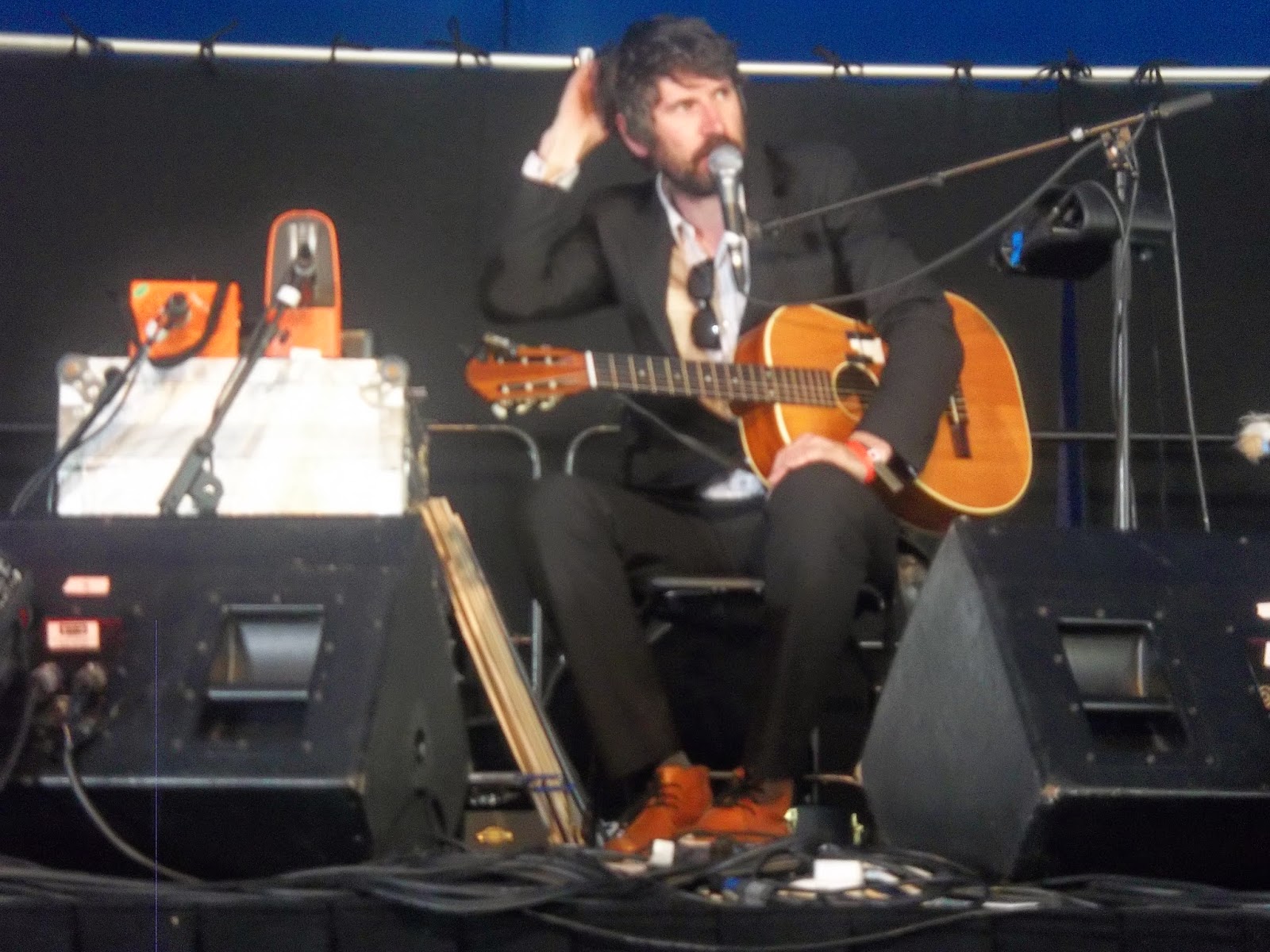 A final thought for John Evans, a misguided visionaries or a complete fool? – to be honest Gruff tells a great story – I would have Bedwyr, Gruff, Jeff Towns and Swci Boscawen, David R Edwards and John Evans along with Iolo Morganwg and Dr William Price around for dinner any day. (Pagan) God Bless the Visionaries and Raconteurs.

The star of the show, John Evans (Waunfawr) : 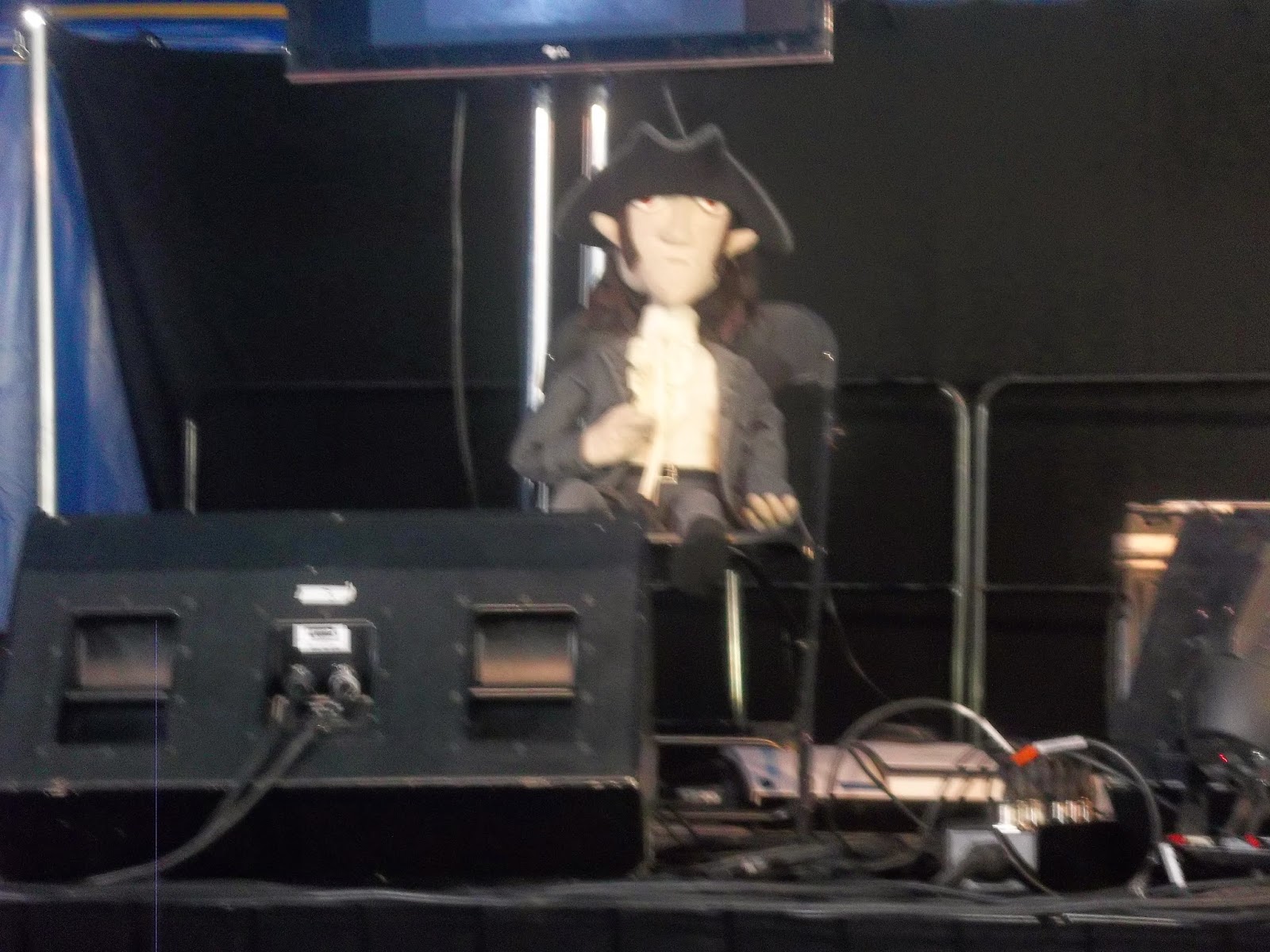