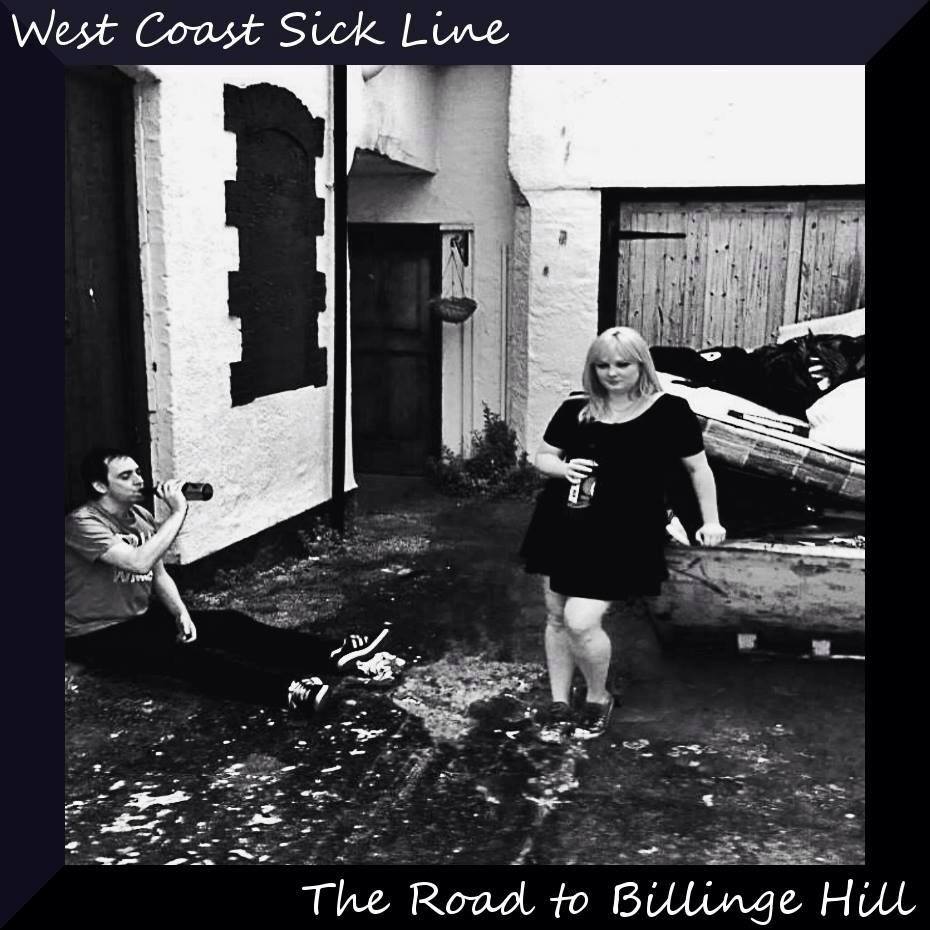 Last week I had to run an errand to Llandudno, so I text my old mate Dusty Moonan to say I would call in on my way home for a brew and pick up a copy of his new album ‘The Road To Billinge Hill’,
‘What time will you be getting here?’ he asked.
‘About lunch time.’ I replied.
‘Fuck I will have to set my alarm!’ was the response.
Anyway I knocked him up around noon and true to form woke him up and a bleary eyed Dusty made me a coffee, stood in his underpants and T-shirt! Rock stars don’t do early mornings, they create while the rest of the world sleeps… That’s when the juices really flow I’m told. I know; I did many all nighters writing music and sleeping in the day and I had a great time (most of the time).West Coast Sick Line is Dusty’s latest project, the band at present features Dusty (guitars, keys & vocals), Stacey Anne Bates (vocals & keys), Nathan Page (bass & backing vocals) and Arthur Woodcock (drums).
I say ‘at present’ as the live band is still in its early stages and may well develop into a bigger line up. They’ve done a couple of gigs in Manchester already and the footage I’ve seen shows some real potential. They’re also building a nice following on the back of regular radio airplay on the Manc airwaves. I asked Moo if there were any gigs lined up around here?,Not yet as there is no where really decent to play. It’s the same old problem but it’s not entirely a bad thing that they’re developing and honing their sound out of town, I personally think it’s a good thing.Dusty has been around for a long time, he was on the circuit when PSST were treading the boards in the early 90’s. I still have a cassette tape somewhere of Orgasmic Funkers, one of Dusty’s old bands. He was also part of Babakin who I put on many times at The Breeding Ground and famously played a set in white culling suits at the height of the Mad Cow Disease scare. I also pushed Dusty on stage in front of hundreds of people to do his first solo shows, he was shitting himself but I did it because I know how good he is.He is a prolific song writer, an extremely intelligent lyric writer, he has a great voice and has that patter to go with it. He has the eccentric personality mixed with humour to go with his music and I can’t for the life of me think why he hasn’t been picked up and signed to a major label and already sitting on his sun bed (at night of course) rolling in bank notes and Rizlas. I’ve been privy to most recordings Moo has done over the years, I have also recorded with him on the PSST album ‘Just Pigeons & Shit’ so I have tracked his progress for a good 20 years now. Moo has written 3 albums in the last 3 years, that’s some going! I really liked the last album ‘Our Name On The Door’, the songs were there but it just lacked that crisp edge in the rhythmic programming & final production.
Moo knew this but it was down to equipment rather than anything else. He has addressed this though and brought in some new personnel (Dragan Riovic & Mark Shreives) to help with drum programming, piano and more. The improvement is massive and the new album ‘The Road To Billinge Hill’ is nothing short of epic! 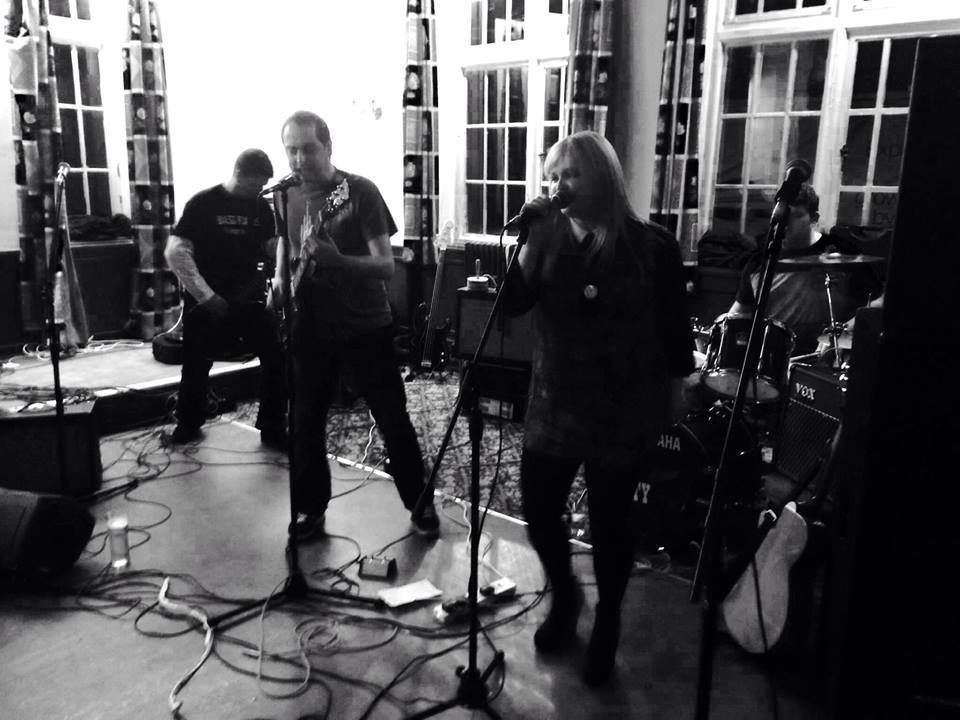 There are 11 new songs and that’s not including the stomping recently released single ‘Have You Ever Been To The North?’ The album kicks off with ‘The Way I Want It All To Fail’, it’s instantly catchy and littered with clever humorous lyrics, tribal style tom drumming and of course Dusty’s signature punk guitar. There’s echos of Hawkwind, Gong, Pulp and The Fall going on here and the vocal style reminds me of Mark E Smith, lazy a sort of not arsed style but it works really well.‘Keep Her Talking’ is one of my favourite tracks on the album, it kicks in punk as fuck with Dusty & Stacey sharing alternate vocal lines. It has an unexpecting quick cut off ending which just wants to make you play it again. This is single material… are you listening?‘You Again’ brings Stacey to the fore of the band, she features a lot more on this album and her voice has grown with confidence. The start of the track reminds me of ‘Leader Of The Pack’ by the Shangri-las. It’s a slower song that builds up nicely uncomplicated by Dusty’s simple but effective leads.‘Programme Video’ and ‘Into Ya Home’ again demonstrate clever lyrics which are well recorded and produced using careful panning effects backed by some solid music with shades of Hawkwind (Jack Of Shadows) Small Faces and I thought I could even hear the Magazine riff ‘Shot By Both Sides’ in there too.‘Wasp In The Car’ & ‘Harry Christ’ follow… Not only are the songs great they all have great titles too! The influences and comparisons ring far and wide, think Pulp, Caravan, Catatonia and The Ramones ‘Rock ‘n’ Roll Radio’ and you get the idea.‘Be The Sunrider’ – great chorus… was it nicked off Aerosmiths’ ‘Sweet Emotion’? …again quality eccentric lyrics, psychedelic English, hail West Coast Sick Line ‘The Aerosmith Of Manchester’, great stuff.‘Roundabouts Of Birchwood’ another great title starts of almost Status Quo style before going blues, again some brilliant vocal interaction between Dusty & Stacey and I just loved the lyric “Shake that fat A55 darling!”‘She Sings Subtitles Aloud’ is the close out track and is simply quite stunning. The quality of the music and musicianship is amazing, the chord changes, vocal harmonies, it is all superb, well delivered, recorded and produced. The song is a slow starter that gathers pace propelled once again by Dusty & Stacey singing alternate words this time… 80 of them I think that stay in the same rhythm as the rest of the music swirls and changes behind them, very, very, clever, a great way to close the album.This is Dusty’s finest work to date and he has done a lot of it over the years. Stacey is a good addition her voice really suits the style and she is developing all the time, the early live footage shows that she has the personality & energy to front the band with Dusty Moonan at her side. It is an absolute travesty if they don’t get picked up and signed by someone because this album deserves to be heard by a wider audience, it is far better than a lot of the crap we get force fed every week by the industry and media. Fuck X Factor, let’s get Dusty to Xmas No 1!!!!…..  but remember kids don’t knock him up before noon unless of course you want to see him in his skid wear!