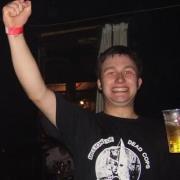 It was cold on the promenade in Old Colwyn, the fishermen lined up in thermals, hoods and gloves gave it away as Gwion and myself pulled up alongside Johnny’s Bench.
‘I bet they didn’t get body paint, I bet it was car spray.’ I muttered as we climbed out of the car. My reference was to spraying our hands orange, paying homage to one of the madcap things Johnny used to do, simply for a laugh.
The days when this gang of punks lived carefree lives, throwing each about and throwing up at The Dudley Arms have long gone, some have grown up, some have moved away, some have had kids, some have to work, some have fallen out big time and some have died. This is why Joe organised this day to shoot a video for Braxton Hicks‘ next single Gone Fishing which is, of course about Johnny, he who died six years ago after a night out in Manchester.
It would’ve been brilliant to have had everyone there, the whole gang there, but, like I’ve just said… Those days have long gone.

‘Oh shit, it is car spray.’ Dave Cox and Joe had been to Motor World to pick up two cans of their finest automobile paint; who on earth would want to pimp their car in flourescent orange is beyond my comprehension. Still, the eight of us who duly braved the biting wind knew it was our duty to get tango’d, as the Braxton Hicks pic shows above.
With a bit of footage in the bag, we left Johnny’s bench, which was put there in memory of him for it was here he used to go fishing, and headed to the badlands of Rhyl.

It was strange, The Dudley is now The Cob and Pen.. It’s no longer the sanctuary for punks and misfits who could seek refuge from the chavs of Rhyl. It was full of pissheads watching the rugby, and I mean FULL – we had half hoped it would look the same and it’d be a quiet Saturday afternoon where we could do a spot of filming by the bar in the old back room. It’s barely recognisable now, and a hundred or so rugby fans wouldn’t take too kindly to these weird punks with orange hands invading their space, their sanctuary.
The Dudley couldn’t last, with dole mongering punks as it’s main source of income it wasn’t going to go forever, but we had some crazy fucking times in there. Gigs you’ll never forget and some nights you’ll never remember!
The landlord Brian sadly left this mortal coil in November 2011 and regretably only enjoyed 18 months of retirement (The Dudley closed in May 2010). 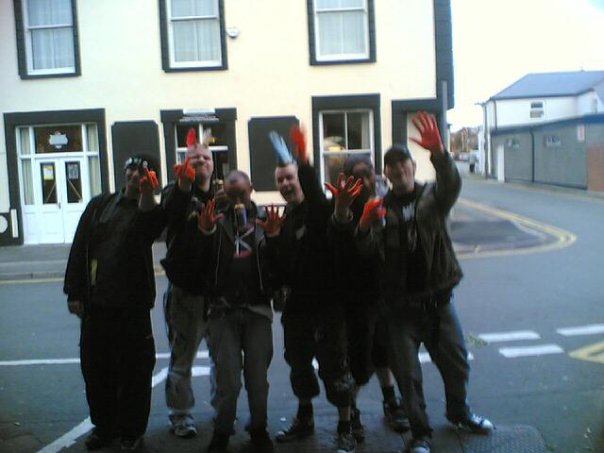 We decided to do an impromptu video shoot of us playing under the arches in front of the Dudley, a place where many of us had sat, stood, chatted, canoodled and chilled out when the punk frenzy was getting too much inside.
The gear was set up, the car was nearby with Gone Fishing on repeat and full blast and we mimed our way through the song two or three times while Milton filmed us as we drew the attention of passers by.

‘Why are your hands orange?’ Some cocky kids enquired. Various answers sprung up from the truth to a disease to a secret cult. A juvenile hand spraying session took place and we sniggered at the bollockings these kids were going to get when they got home.

Offas Tavern next in Prestatyn… It was still early doors, we got there at 4pm, soundcheck wasn’t until 7pm and doors weren’t until 8pm, so there was a lot of time to kill, a lot of chips to eat, a lot of football updates to read, a lot of beer to drink / cola to rot your teeth. Taking advantage of the live room we set up our stuff, and despite there being no PA yet, therefore no microphones, we ran through a couple of new tunes we’d been working on, I Won’t Take The Blame and All In (both of which won’t be played tonight), along with I Don’t Wanna Be You (which will get it’s second live airing tonight). 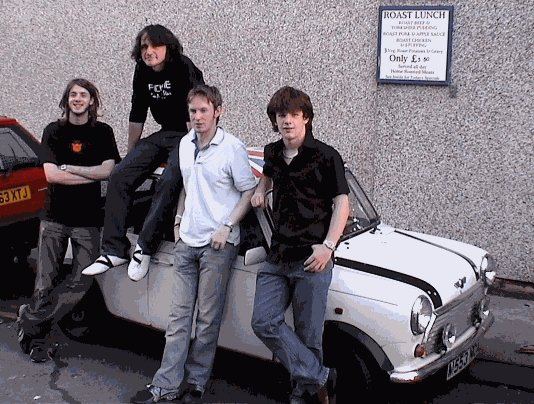 The soundman, Mark turned up and we got about doing a proper soundcheck and also filmed Gone Fishing again. The other band Dressed Naked (pic above from 2005) turned up and there was a bit of a stand off prior to today as their drummer had broken the unwritten code and had refused to let us use his kit for the gig, which meant 3 people couldn’t get a lift with us. The normal and sensible thing to do is one band, usually the local one, provide the kit and the other bands bring along the ‘breakables’, as in kick pedal, snare drum and cymbals. It makes sense as you don’t want a small venue or pub being unecessarily cluttered up.
Put it this way… We’re playing with 4 other bands in Bangor uni on Thursday and they’re using our kit. No problem.
Watching Dressed Naked play was like being transformed back to those heady days in Bar Blu, Rhyl seven years ago, when this band seemed to be on every week! That’s not true, but it felt like that. I’m sure I’ve seen them a hundred times! Hundred and one now!

You kinda forget that being in a band, playing original material means you’re going to play gigs like this. To 20 people. The positives are that it’s not too far from home, it’s only our sixth or seventh gig, we need the practise, and we’re enjoying ourselves! If we wanted to make money we’d be playing covers or be a tribute act calling ourselves Wink 192 or Poo Pighters.
There’s more humility too, yeah we played to 20 people (probably less), it was the same 20 years ago but we’d have said it was 70 people. The difference today is you can reach far more people though the evils of social networking and the t’internet than you could ever have dreamed of ‘back in the day.’ This blog would’ve been a column in a fanzine and read a good few months after the event! 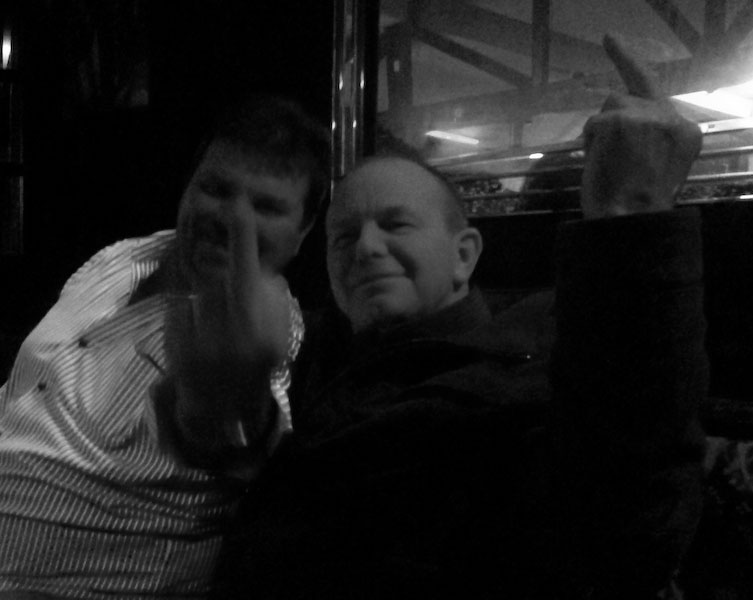 The gig? The set? Oh yeah… it was good fun, songs played were Never Kill Yourself / Depression / Poison By Rancid / Gone Fishin’ / Get Outta My Head / Government To Be / This Song Was Never Written / I Don’t Wanna Be You / Macho Man.
We were smiling and the few that attended, Johnny’s Dad (Alan), his Uncle Joe (pic above), Dave Cox, Milton, Dressed Naked and their followers brave / stupid enough to stick around were also smiling. We all had a good laugh during our 25 minute set. It was disappointing that no one else connected to Johnny could make or make the effort but that is life in the modern day. Gigs are no longer events, particularly shitty little gigs like this, and people have very busy lives, demanding children/spouses/jobs… Maybe we should all get off the sofa and live a little more eh…