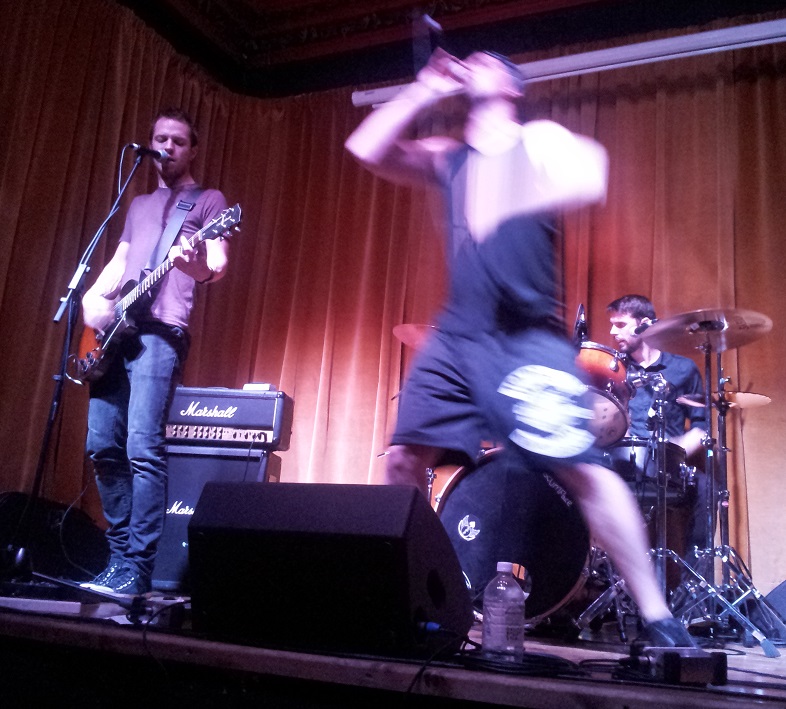 I played in Bradford once, it was in 1988 or ’89 at The Manhatten Club… What a shithole..! We supported Culture Shock and I remember lending my guitar amp to Metal Duck, only it was Culture Shock’s amp ha ha!! We (4Q) were shit, our instruments were shitter and the audience were those dire leftie-anarcho-nazi types who had become self-proclaimed Fun Police. Enjoy yourself at your own peril, laugh and the world will only laugh with you if they approve of it. If it had an -ism at the end of it then they’d have a strong view on it. If it didn’t have an -ism on the end of it then they’d add one to it, they call it Twatism.
The Drastics (pic below) hail from Bradford and were probably still shitting their nappies when I ventured into their neck of the woods. Thankfully they’re a far cry from the drab brigade of those dark years and are intent on having fun. 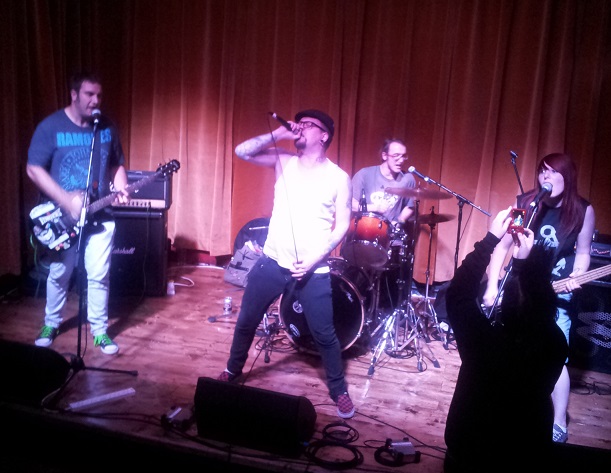 We had been in Manchester all day, one of us being a slave to the Gods of Shopping, the other in pub, inwardly smirking as the football scores came up on the screens. After contemplating a law suit against Hard Rock Cafe for the soft rock SHIT music they play in there (when have Bon fucking Jovi, Europe and Def Leppard ever been hard rock?), we headed to The Northern Quarter.
It was a tough journey, Manchester was full of dejected football fans, Freshers high on grant money and Tory scum readying themselves for a war cry type speech from that archetypal Churchill in waiting, William Fuckwit Hague…
Gullivers was awash with drunks, who had soaked the sawdust up off the floor with that strong East European beer… We were late and made our way upstairs to the venue… A girl shuffled past in the opposite direction; I asked her if there were still bands playing.
‘Yeah, but don’t bother with the next one as they’re shit,’ she said.
It turns out she is their bassist Jennie and she was wrong, The Drastics were far from shit. Yeah they’re not gonna win the Mercury prize for originality, nor do they claim to be anything new, but they’re loud and brash and dared not play anything over two and a half minutes.
The opening song was all drums and vocals, so I suggested they racked up the guitars. This they did and the overall sound was better for it. Monkey Tennis sounded like a dead ringer for Braxton Hicks’ Never Kill Yourself and they did a great sped up almost beyond recognition version of 20th Century Boy.
Ten Hours was also a good catchy tune, taking the pace down a tad before kicking it back up again with a well-worn chord sequence song called Drinking Solid.
The beer bellied front man Dean was full of beans and introduced a song called Never Trust a Taxi Driver, no, not about being ripped off by being taken ‘the pretty way’ home when you’re pissed, but about Derek Bird, that psycho taxi driver who killed people.

We were unfortunate to unwittingly choose a hotel right next to the Tory Conference, this meant that Sunday morning would be crawling with Toff Ponces and their stuck up Whore Wives with real fur over their shoulders thinking they own the country (oh shit, they do!) – and they also think they own the fucking car parks too… They commandeered the car park where I had shoved the Crudmobile and I was told (only by chance) that if I didn’t move it before 9am on Sunday that it would be locked in there all day. This pissed me off as my only chance of a lie in for weeks has been ruined by some Fox Hunting, Badger Baiting, Pheasant Shooting, Pensioner Killing, Kiddie Fiddling Shit Bags who are obviously more important than the common people.
I let my feelings be known by leaving messages in the ‘Feedback Box’ of the said Car Park (#100ActsofMinorDissent).

There was also a massive demonstration brewing on Sunday as more than FIFTY THOUSAND people marched on Manchester in protest at what the government are doing to the National Health Service and their Tax policies, which are aimed at ramming you hard up the arse. You may not have heard about this demo on the news as there seemed to be a BBC blackout so far as it was concerned.
Why give coverage to left-wing scum when our great leaders are in town?
Just because you hate the Tories doesn’t make you left wing or an anarchist. As Aditya Chakrabortty said, ‘The Conservative Party: funded by the 1% and run increasingly for the benefit of the 1%.’
Normal apolitical people attended this march to vent their anger and their protest, and it was pleasing to see it pass without incident. Rioting (the unbeatable high!) would have played right into their hands… 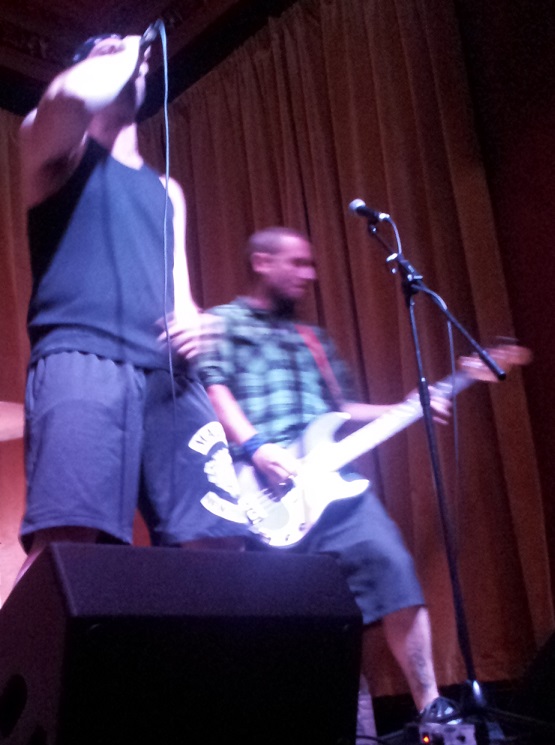 I’m sure I’ve crossed paths with The Kirkz somewhere over the last 15 years, although on consulting my by no means complete ‘Bands Seen List’, which stands at 1572, The Kirkz fail to show up on there (so far, still a lot more to add). Anyway, they were added tonight, and I do recall playing them on my CrudCast after they sent me that mortal sin of sins… a Christmas EP!
They are venturing to our North Wales shores on October 18th to play at The North in Rhyl with Paul Carter and that Braxton Hick gone solo Joe Hovis, so tonight could be considered a Crud Reconnaissance Mission.
It’s safe to say Rhyl is in for a treat, albeit not what I entirely expected from these lads from Macc; they have an element of Limp Bizkit about them, but not in a bad way. Loved that track that went ‘The lions are at the gate, the wolves are at the door,’ which I later learned is called Enemies, it’s stomping, angry, throat tearing punk rock…
The quick witted vocalist MJizz kept things movin’ movin’ movin’ as they spedcore their way through the set ‘Watch it burn! Watch it burn..!’ They reminded me of Weapons of Mass Belief which is a compliment. Finishing with Zombie Nation it was all over far too soon… Great set…