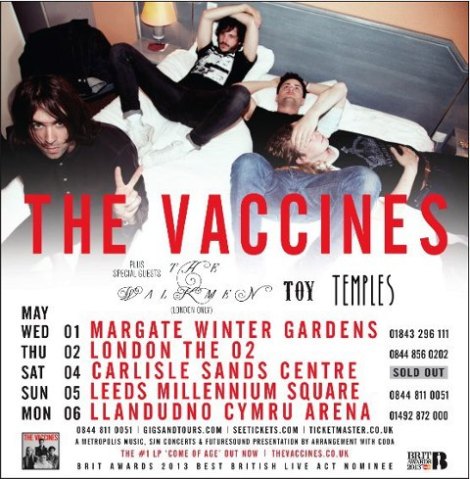 Generally when I think of Llandudno, I think of old people, seagulls and generally just a lingering sense of disappointment. It’s therefore pretty rare that there would be an occasion where I would book tickets about 7 months in advance. The Vaccines were one of these rare occasions.

In case you aren’t aware, The Vaccines are a band which have stormed to the heady heights of an arena tour within a few short years of forming. This is a pretty incredible feat, and it’s not really hard to see why, with catchy hooks and easily memorable lyrics, these guys are what I like to refer to as an “Earworm” band.

Now, I’ve been desperately waiting for them to announce who their support acts were for this 5 day UK tour and up until a week ago, I still had no idea who was going to support them. Having said that, after they played, I still had no idea who they were, but I’ll get to that. TOY and Temples were the support acts for this tour, it says so right there in the poster (see above).

The night kicked off with an half hour queue to get in, a £6 drink (£6!!!) and some pretty dodgy security guards, which I’m just learning about today. Seriously, check that link out, it’s so ridiculous it’s almost funny, until you remember how ridiculous it is, and then you just want to punch a manager in the face. Anyway, the show must go on, and after a brief yet awkward pat down from a burly gentleman, I waltzed in to the arena. I’ve previously complained about the amount of time it takes to get a band playing, but this made the 15 minute wait at Central look like a brief blip. I understand they want to get everything right (and to their credit, they did), but it was 8 p.m. before the first band came on and I was getting a little restless. Still, I was fairly patient, and good company was aplenty, so I can’t complain too much.

The first band were called TOY. I found that out today. This is partly because I was expecting the first band to be called Temples, and partly because at no point did they reiterate who they were. The only clue as to their identity was the fact that “TOY” was printed on the bass drum, which I suppose is a bit of a giveaway, but at 5ft 7?, I was struggling to see the singer’s head let alone the bass drum. I can’t find a description anywhere of what genre TOY actually are, so I’m gonna go ahead and presume that they’re a sort of psych-trance-indie-keyboard-synth-rock band. I’ve never seen a psych-trance-indie-keyboard-synth-rock band before and so I was pretty excited to be taken on a progressive journey through their music… Or something like that. At any rate, I can’t fault anything about these guys’ (and gal’s) musical ability. The drummer was tight all night, much like the rest of the band and the overall sound that these guys (and gal) gave off was impressive to say the least. I saw The Cure live last year and they blew me away with their light show and Gothic stage presence. These guys (and gal) reminded me of that performance. Although they didn’t really do anything massively entertaining for the most part, they didn’t really need to. It definitely felt like part of their sound and image was to just stand there and try and lull the crowd in to a trance. This technique almost worked, but unfortunately, you always have insufferable knobs at a gig like this who are so closed minded and disrespectful about a slightly different musical genre that they spend the 40 minutes shouting “Get the fuck off the stage”. I can’t even imagine how soul crushing it would be to be heckled like that when I was actually performing pretty well. I’m not sure if the singer heard (I doubt it) but he looked suicidal for the most part of the set anyway so I highly doubt he cared. Overall, this was an impressive performance, and if you’re a fan of psych-trance-indie-keyboard-synth-rock bands then you should definitely check them out! A slight negative among the myriad of positivity here would have to be a slab of criticism directed at the lead guitarist, who’s guitar seemingly unplugged every other song, is it really that hard to plug your guitar in and not step on your lead?

Anyway, once TOY graciously left the stage (complete with a fit from the singer followed by politely placing his guitar back on his amp), we were left to stand around listening to background music. For an hour. In a previous review, a “Mr C” very kindly called me a “fucking idiot” for implying that 15 minute changeovers are quite lengthy when 30 minutes is standard in a large venue like this. I doubt even “Mr C” would disagree that an hour is pushing it a bit. Anyway, we were all waiting patiently for Temples to take the stage, or were we? Apparently Temples weren’t here tonight, for some completely unknown reason. I mean seriously, what the fuck happened? There was nothing about it on their Facebook page, where I assumed there would be a reason at least. [Neil Crud: Rumour has it they got too pissed to play]

At any rate, nobody was going to complain when The Vaccines came on at quarter to 10 and walking on to The Jackson 5?s “I Want You Back” is always a nice way to open a set. Launching in to their song “No Hope”, Justin Young and co. pretty quickly got the crowd from a hoard of stationary individuals in to one mass swarm of bouncing energy with at least 70-80% of the crowd singing every lyric right back at them. I’ve seen The Vaccines twice before and this was quite easily the best performance of the three. Complete with an intricate light show and near perfect sound, they ploughed their way through a seemingly continuous string of hits. Seriously, it’s mad how many songs these guys have done that I know every lyric to. What was even more mad was the fact that almost everyone else in the place also knew all the lyrics to almost every song. With the exception of the unveiling a new song (featuring Justin on acoustic guitar and some exquisite vocal harmonies), I don’t think there was a single song where there wasn’t people singing right back at them.

It was quite odd watching these guys play. When watching Noel Gallagher’s High Flying Birds at last year’s Isle of Wight Festival, I commented to a friend that Gallagher’s crowd interaction was terrible, to which she replied “He doesn’t need crowd interaction, he’s Noel Gallagher.” I’m fairly sure this could just as easily be applied to Justin Young. Without ever really saying anything more than “Thank you” or “I’m gonna need you to help me sing this one” once or twice, he had the crowd eating out of his hand, bouncing to the beat and singing to the melodies. It was truly exceptional to watch such a masterful, yet non-existant way of controlling a crowd, and the crowd loved it. I can’t even begin to imagine what must have been running through the man’s head as he watched about 1500 people (complete guess) do exactly what he wanted them to do without having to tell them do it. The night was completely topped off by some apt drum solos from Pete Robertson and a pounding bass tone from Arni Arnason. It was truly a treat to see this band live.