It has to be said that Steve Rastin is like that Vietcong soldier they found in the jungle in the 1980’s who thought the Vietnam War was still being fought! He [Rastin] operates in the Rhyl Bubble, unaware of what goes on outside the zone, and quite frankly couldn’t give a toss either. Gigs organised are sometimes promoted, sometimes the bands are told they’re playing, sometimes they’re shambolic [gig and band], sometimes a success, sometimes both. What you can’t take away from Rastin is consistency, he’s consistent at all of the above and also essential to all things local and live. Since the move from the very square and unatmospheric surroundings of Vegas Bar to the rough ‘n’ ready ‘n’ reopened North Wales Inn things have taken a turn for the better… Yes, that ramshackle karaoke piece of shit PA is still wheezing its way through performances, but people are once again turning up to see live bands… This is a plus, as for far too long bands have been playing to other bands on the bill and the bar staff. 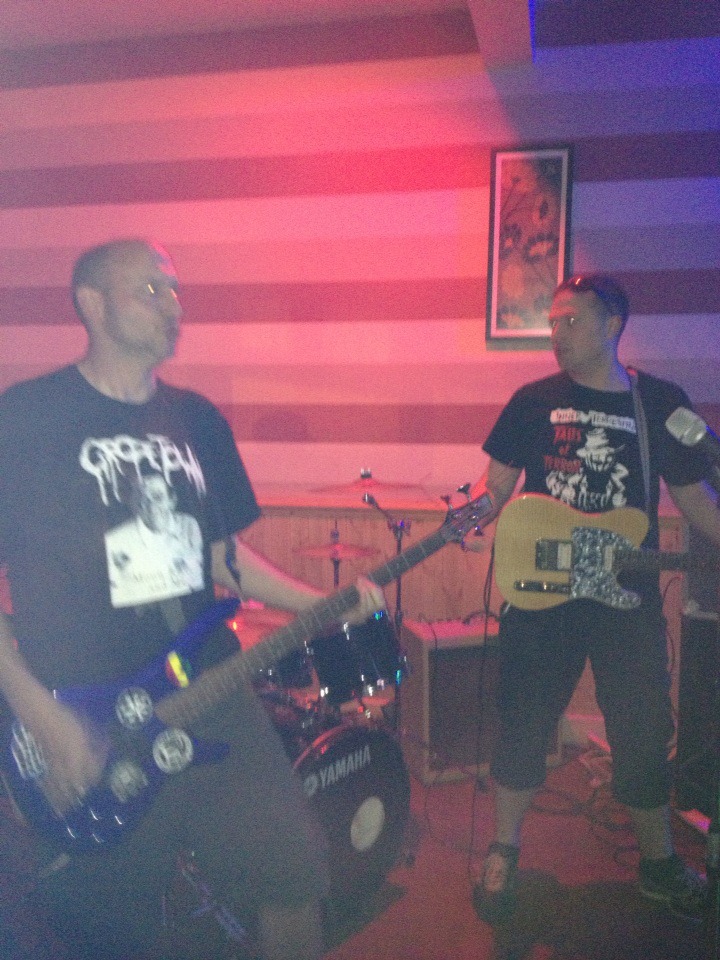 It took about 6 emails to Steve to get him to actually confirm that we were playing tonight, and that’s part of the fun and excitement! We were playing, and Soundscape writer Nat was there to record the event for their website…
Of our set she said…
‘Opening the show was punk outfit Braxton Hicks (7/10). Admittedly they were a little sloppy – they ended up playing their first song three times due to various setbacks! – but they more than made up for this with their sheer energy and enthusiasm for what they did. They just seemed to be out there to have fun and it really came across in their performance. I particularly liked the fact that the band wanted to get the whole of the room involved, especially when bassist Neil ventured out of the room mid-song and into the smokers area! The three-piece had a great stage presence and are definitely worth checking out if they’re playing in your local area.’

Now, I was so excited about seeing St Pierre Snake Invasion that I wouldn’t have cared if the mic stand that vocalist Damien Sayell smashed against the wall had hit me in the face providing it didn’t knock me out and, as a consequence miss the show. It hit the wall above the young soundman (soundboy) as he fought with the PA. TSPSI did however, knock me out, they knocked us all out with shock and awe, energy and guile, guts and garters. This is what bands need to aspire to.
Some troll had dissed the North Wales scene and suggested we are the laughing stock of those beyond our borders because of our shit backward backyard bands; and there is an element of truth in those cruel jibes and I found myself agreeing with him/her during this TSPSI set. This band from Bristol (with Rhyl exile Damien upfront) possess every ingredient to make the perfect band – they’re sexy, sassy, arrogant, complete bastards, nice guys, great musicians, brilliant songwriters and absolutely mind blowing performers.
I nearly joined this band in its infancy about 4 years ago when Damien was still up here, but on listening to those early demos it was apparent that a bumbling buffoon on bass was not in their criteria, and thankfully for them I passed on the chance.

Tonight’s show was tame by some of their standards as I’ve seen vids of them literally crawling across the ceilings of venues, it was still jaw dropping fun with that element of real danger. You actually stood there in the audience wondering if you were going to get physically hurt as Damien would randomly and completely spazz out to excellent songs like Choke Stroke (dedicated to Michael Hutchence) and Encore! Encore!
Superb; no, that’s not quite right… FUCKING SUPERB…