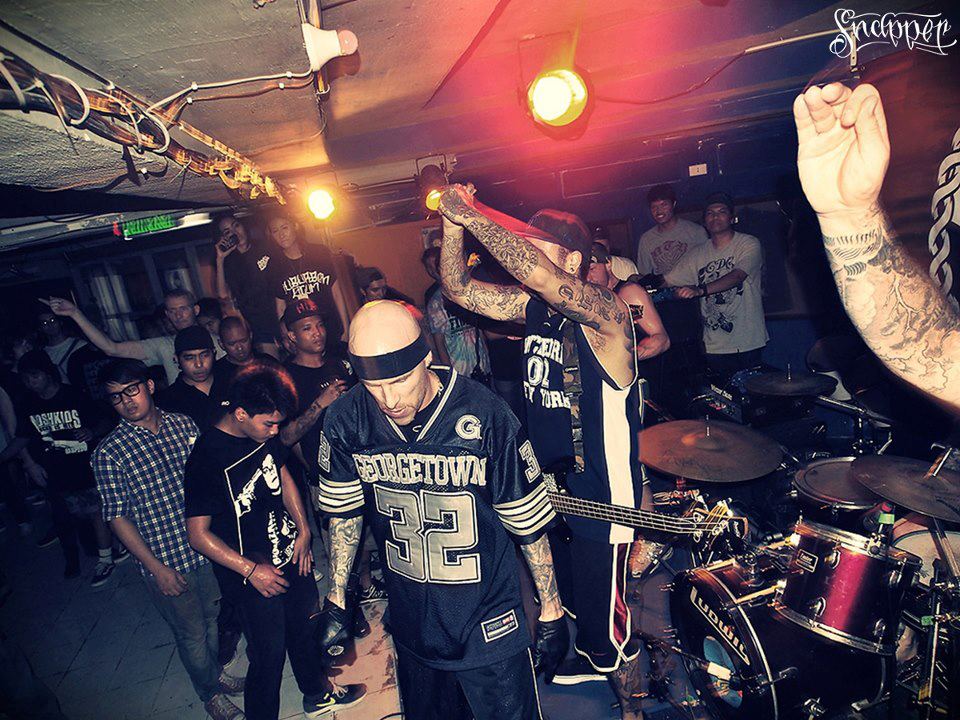 From where I’m staying (a district called Pinklao) in Bangkok, it normally takes about half an hour on the bus to get to the area where the venue is. I’ve not been before and had to follow a mostly thai map (with the odd english translation thrown in for good measure, I am in Thailand though to be fair!). The blissful Bangkok traffic meant I was fashionably late but thanks to a hiccup or two the kick off time was delayed an hour so I hadn’t missed anything by the time I arrived! Wahay!!

I was once again greeted with a warm welcome from Gap (who runs Holding On records) and the boys from Monument X, our hosts for the evening. Had a good chat with Niko (Monument X rhythm guitarist) about hardcore / hardcore punk in Thailand, violent dancing, international touring on a DIY budget and how time will tell how many of the kids will still be here supporting the shows in a few years when it’s out of fashion. We arrange to record a video interview to promote Asian hardcore as there’s a lot going on here that deserves your attention! So watch this space for that…

And so, the rattling vibrations from the small function room to the side of the bar indicate the first band is going on, everyone jumps on their feet an rushes into the room buzzing with excitement….

WAR STREET. I’m told the first two bands are really new, War Street look very young and don’t look very confident, that will come with time though. They really make a heavy, floor-tom thumpin, stompin hardcore sound though, with down tuned guitars and chunky riffs. It was difficult to hear the singer, not really sure if it was his voice or the PA that was struggling but he did look like he was giving it beans! Great opening band. 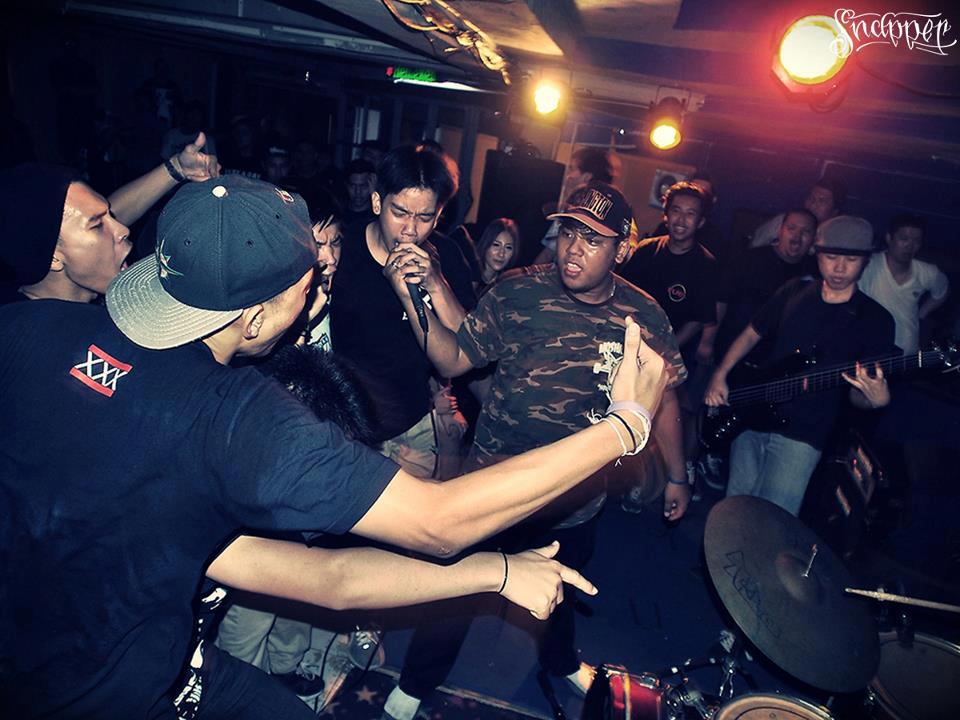 BORN OLD SICK DIE. Another new band but must have played a few times before judging by the strong vocal support from the crowd. “Beatdown” hardcore slipping into faster hardcore punk enough to keep dirty punks like me interested (think in the vein of Suicidal Tendencies or Minor Threat). Heavy riffs an a nice, angry singer! Also, I really love the band name!

THE CHRISTMAS PROMISE. A truly excellent drummer really made this band heavy as fuck an really tight even through the really fast blasts! You can tell these are much more established, I saw them play the day after I arrived in Bangkok (Feb 23rd) and they had a good response then. Everyone went for it tonight though and by the end of their set the pit was really starting to look like a war zone! 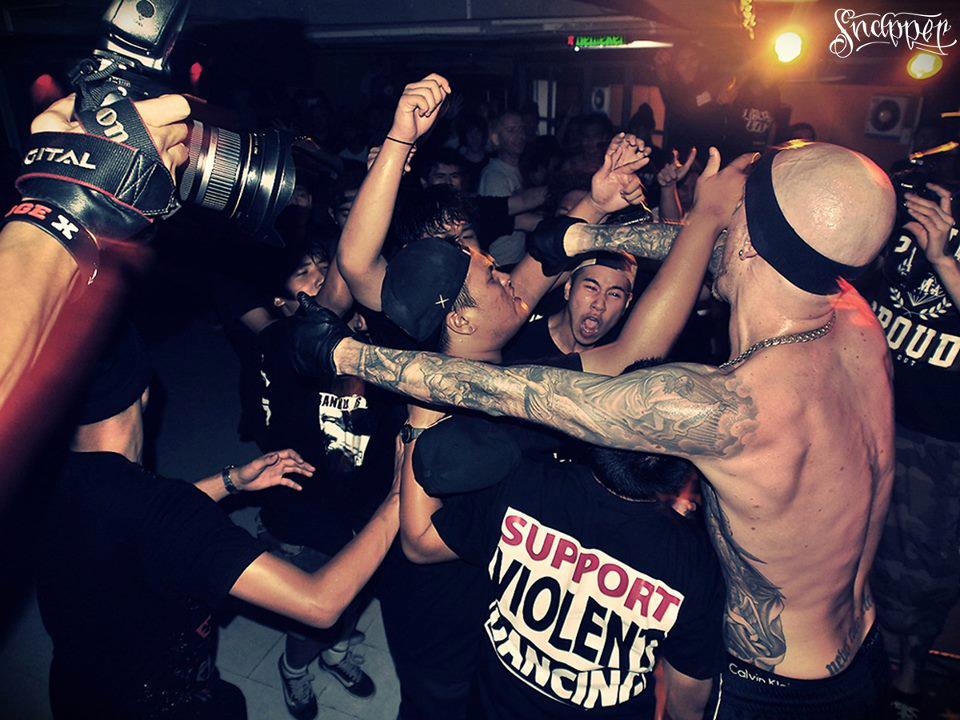 HAVE A DAY: This band had a slightly different feel, more of a upbeat bouncy/fast rock feel. Still stompy hardcore an really heavy riffs! Im gonna need to be more descriptive arent I?! I saw these on Feb 23rd too, loads of good banter between the band and audience, playing to their friends an havin fun with it. The singer had a baraclava on for the first couple of songs, I dont know how he didnt collapse in this blistering heat! I’ve left all the links I could find at the bottom anyway so you can hear them yourself!

COLD HEART. The running order was well put together, the bands tonight have just been getting better and better! Cold Heart are really talented musicians, heavy double vocals so loads of weight to back up a really heavy band. Often using a double kick drum (boo hissss!) that make me want to call them a Hardcore / Metal cross over sort of band…? I really got into it though, and after a few good knocks to the head I was feelin the vibes and giving as good as I got! 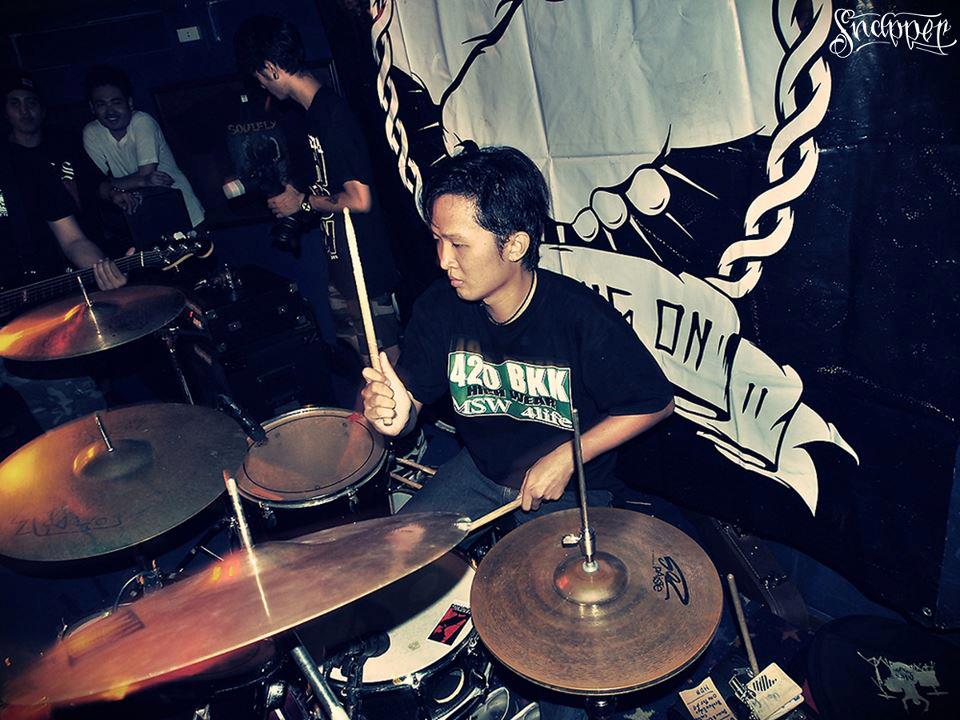 TEN BAHT PER HOUR. I saw these at that same gig (feb 23rd) and really enjoyed them then, but tonight, I really, really got into them. The drummer was fast, relentless and full-on all the way! The tightly tuned snare drum must’ve been begging for mercy (an getting absolutely none)! Two guitarists really add weight to this as does the bassist and a monster on vocals! And even though it’s definately not a competition, this band, for me, absolutely stole the show. Fuckin ace! Again, couldnt help but get stuck in, NWPR represent! 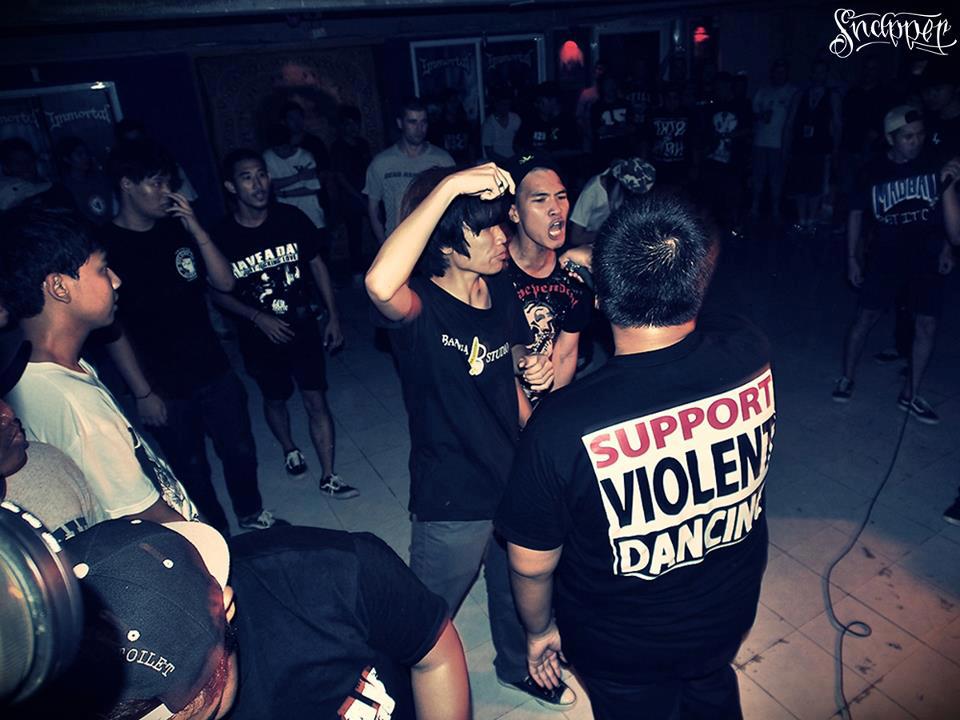 A-ZERO. It was unfortunate this band had to cancel, I didn’t catch the reason why they pulled out but Niko told me they’re one of the big, old hardcore bands that kind of started the Thailand hardcore scene. So yer, shame to miss them. Hopefully they’ll be playing again some time before I head home! 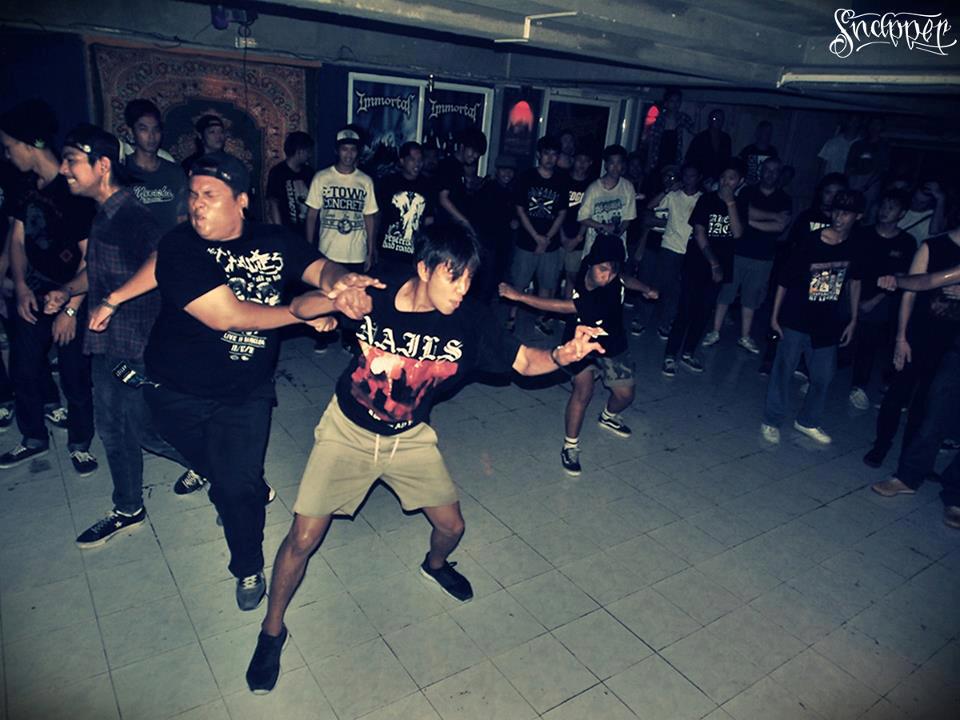 PROVIDENCE. On tour all the way from Paris, a nice little intro of some disco pop allows me to witness a very obscure and surreal moment; fists and fly kicks etc to the sound of cheesy disco music! I didn’t realise how established this band were til I saw the crowds reaction when they started playing. They get loads of vocal support and cheers when they announced the songs before playing them etc. Once again, really heavy hardcore or “beatdown” hardcore. I’m so out of touch! They remind me a little of Hatebreed. They demonstrate the light hearted sense of humour that goes with the party atmosphere here by doing a hardcore version of Eye of The Tiger. They also covered Friend or Foe by Madball, and although I hate to criticise; the drummer can’t play a fast beat for shit. They’ve only been going for 5 years though, credit where it’s due, they’re from Paris and they’re getting this kind of response on the other side of the planet. Fair play and a nice clear message to all those who lack the confidence; it can be done.