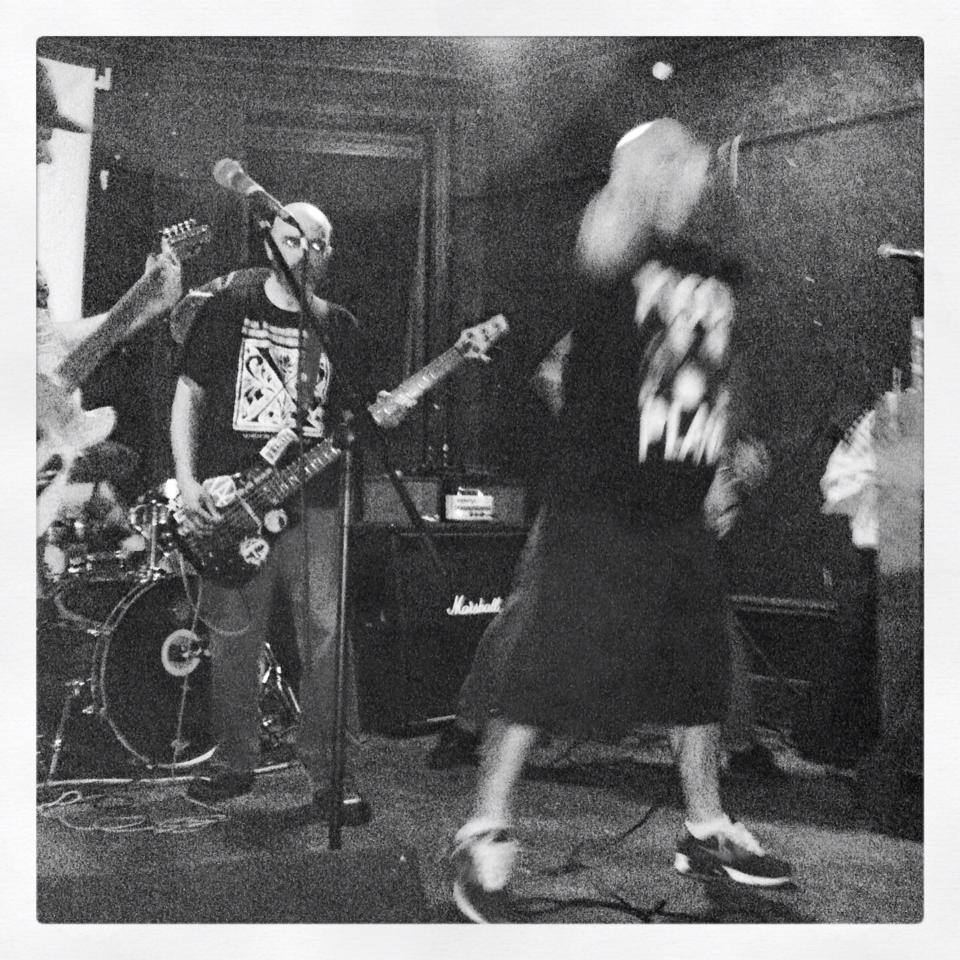 A night of Hardcore?! on a school night….in RHYL?! I’d be stupid not to go to this. The good folk at Dirty Vultures promotions with the combination of local gig soundman/promoter (Stone Cold) Steve Rastin, decided to make the most of the positive attitude the new owners of the North Inn has towards live music by putting on 4 great hardcore bands for a great night of hardcore. All for the entry fee of £0.

I shared a lift to the gig with 2 members of BBR, although booked to play this evening they were absolutely devastated when they got the call from their drummer saying they had to cancel tonights gig due to an abscess, so on the gig went on regardless with 3 bands on the bill.

Due to Steve Rastin’s reputation for starting gigs fashionably late, we also turned up fashionably late thus missing a large majority of first band The Jeffrey Uppercut‘s set. This was unfortunate as I can’t remember seeing a band with such energy and intensity in a long time. The 4 or 5 songs I did see I was transfixed with the sheer napalm death with a punk twist approach to their live performance. The singer was one of the most terrifying frontmen I have ever seen, covered in skinhead tattoos all over his head, you can tell this band is his, and the other members’ life. They finished with a catchy little number the crowd were joining in with called ‘Naive Cunt’ in which the chorus had the whole room shouting “Fuck You, You Cunt!” It was great that the band brought a coach load of people with them from Widnes, giving the North a fantastic atmosphere. If I know they’re are on the bill at another gig I’m going to I’ll be definitely be on time. 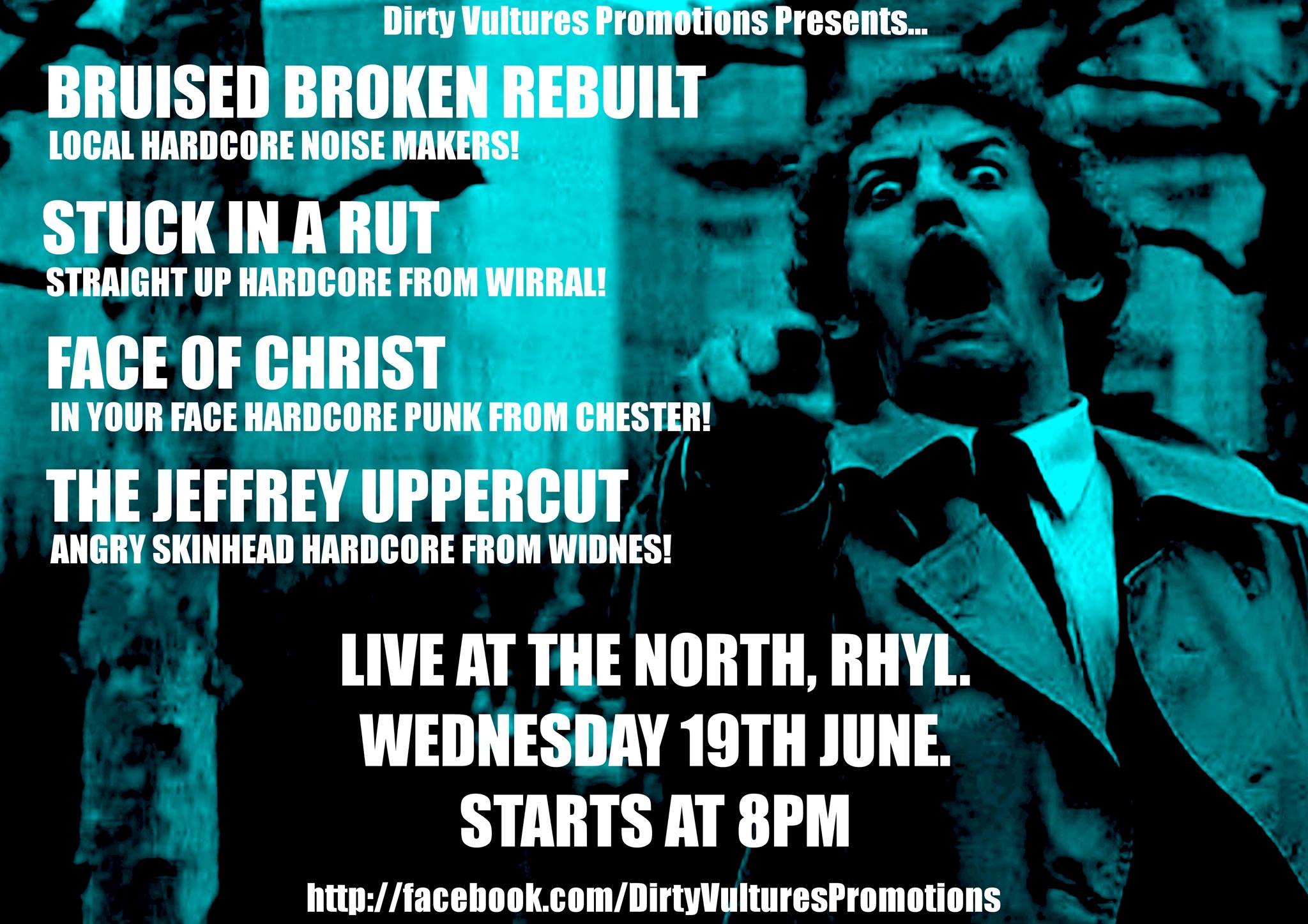 Between the first and second band I had realised I had been to hundreds of gigs in my time, seen plenty of hardcore bands, but this was my first hardcore night. The thing I really enjoyed about the night is that there is no dress code, no postering and everyone was purely there for the music. If you didn’t know you have thought some people were there to watch Jay-Z, some for Motorhead, some for 4 Skins and some for Slayer. Just a great night of loads of different types coming together for the love of music.

After a brief soundcheck, Chester’s Face Of Christ came on. I saw Face Of Christ a few months ago play to an empty room at Vegas Bar in Rhyl and they seemed a bit disinterested due to the fact only 4 people were there. This time the whole crowd were on the bands side, the singer cut out the lengthy rants in between songs and very were just incredible. The drumming was absolutely immense. Although the sound was pretty dire and they may as well have been singing in Cantonese the sheer energy and the way the songs change pace were incredible. They are similar at times to Keith Morris’ new band OFF! with added intensity and this is no bad thing. One of their songs sounded similar to the Anti-Nowhere League classic ‘I Hate People’ as their set went from strength to strength they put everything into their set and climaxed at the end getting everything done in true hardcore fashion in 15-20 minutes.

I would say headliners, but at this gig there was a true sense of no heroes and no heirarchy approach… next and final band on Liverpool’s finest Stuck In A Rut. The band were fantastic, but I have to say unfortunately the sound really let them down, more so than Face Of Christ due to the additional guitar. I enjoyed watching soundman Steve Rastin fanatically twist as many knobs as he could and shitting himself in 20 minutes throughout the set! Despite the sound set backs they were consistent to the standards of the  first two bands and added a more metal influence to their Black Flag era hardcore with the band resorting to playing in Drop D for a majority of their songs. The singer had a cracking stage presence and the band had a great sense of humour, arguing on stage and the singer telling the guitarist how the new songs go! The singer obviously had some great political views due to his rant about Same Sex marriage and it would’ve been great to hear the lyrics, but the sheer volume and rage in which the band filled The North Inn more than made up for it. Raw, aggressive and powerful music at its best. 20 minutes and its all over.

So there you have it, no bullshit, 3 bands playing for less than an hour. For the intensity of this genre of music this was plenty. People in bands from all types of genres could have learnt so much from this gig. To quote brassed off “It’s music that matters” not cash, not the sound, not playing to one person, not an image, not throwing a strop when the sound might not be perfect, it’s the music. Well done to Dirty Vultures Promotions, and well done to Steve Rastin. Keep up the good work, can’t wait for the next one!