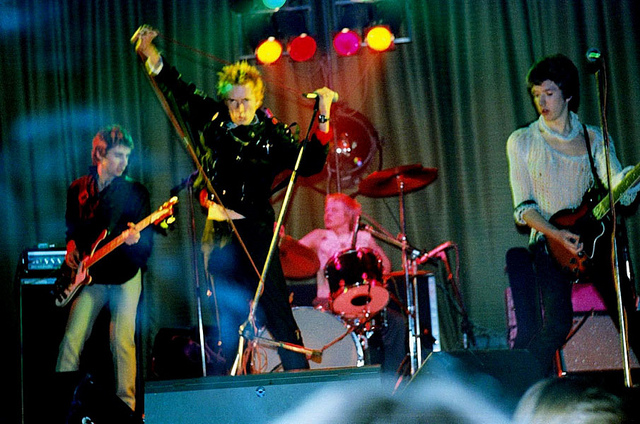 I have just written a piece for my Herald Gymraeg column (January 1st) on the fact the ‘People’s Collection’ website have just published a piece on Councillor Ray Davies, the man who tried to ban the Sex Pistols from playing the Castle Cinema in Caerffili during the Anarchy Tour December 1976. 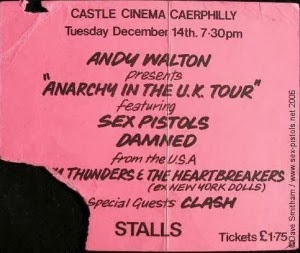 The difficulty with the Herald column is that the readership want history / archaeology – not Pop Culture and in a way I have to respect that. I was lecturing in Ysgol Goronwy Owen, Benllech, just before Christmas to over 60 people, who were all over 60, and although I was introduced as an “ex-Punk” and member of Anhrefn, you could tell from the introduction that the majority of them were aware of the Herald column.

Usually the audiences at lectures just laugh about the punk stuff – they are unlikely to have ever attended an Anhrefn gig, and it’s rare that the Chair for the evening does not slip in something about Anhrefn during their introduction – they have done their research ! I am usually there to talk about archaeology, occasionally I do lectures about writing, but I am never asked to lecture about ‘Punk Rock in a Welsh Context’ or ‘The effects of Thatcher on Welsh Music’, or whatever …….

My point in the Herald was that we need to look at the Caerffili concert in terms of Social History. There is no doubt that for many Welsh people watching ‘The Great Rock’n Roll Swindle’ that the Caerffili footage is amongst the most interesting thing in that film. The fact there were more people outside the gig protesting and singing carols than there were inside watching the Pistols. Only in Wales. But fascinating in terms of Social History – that’s the point.

There were some kids in the audience who had already tuned in to Punk, some were dressed up for the part, but the real interest for this piece is the social context, the Methodism and the conservatism of the socialist working classes at the tail end of 1976, the Valley’s culture, the state of the Country in those gloomy, dark depressing times of 3 day weeks, strikes and that’s before Thatcher had  even started ! 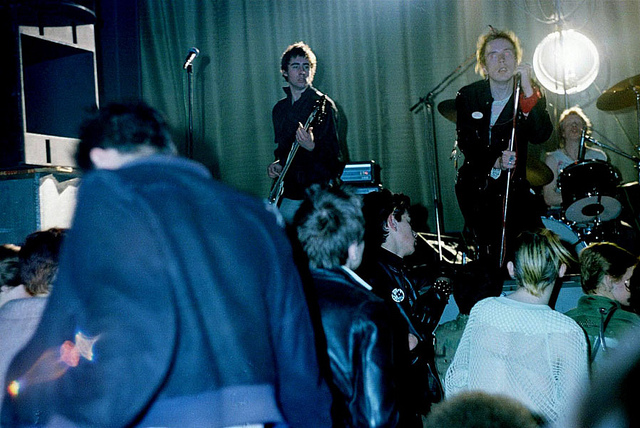 Councillor Ray Davies has since changed his mind on his stance – this is what is up on the People’s Collection, this is the stuff of history, this is fascinating and almost tinged with sadness as Davies regrets his actions of December 1976.

In fact, Davies et all, do the Pistols a massive favour. They give the Pistols the ‘outlaw’ image McLaren craved for so desperately. They give Rotten and Jones the opportunity for great quotes “we’re inside and warm, they’re outside and cold” and they gave Julian Temple brilliant footage. The Caerffili gig would have been soooo “boring” (Punk word) if it had gone ahead without incident.

My point is that the People’s Collection is a great resource, a very democratic source – where Welsh history is dealt with without the selective editing that so sadly and badly affects the Welsh Media. We really do need to claim and re-claim bits of our history and it’s quite funny that Caerffili Heritage have seen the value of promoting the fact that the Pistols visited their town. Not many towns in Wales can make that claim.

Below is a ‘lost’ Sex Pistols interview printed in Buzz fanzine in Feb’77, it was done while they were at the Caerphilly gig.

One cold Tuesday evening last December, the Anarchy in the UK tour consisting of the Sex Pistols, the Clash and Johnny Thunders’ Heartbreakers came to the Castle Cinema, Caerphilly. Inside the cinema were several TV crews and dozens of newspaper reporters, outside were over 300 people singing carols in protest at the concert, large numbers of police and almost 100 kids who had come to look at the whole spectacle. During the six hours we were at the Castle we recorded over an hour’s worth of conversation with various parties; for our part we’re not going to pass an opinion on the concert except to say that we didn’t enjoy the music – the rest is up to you.

Scene: Johnny Rotten, Sex Pistols’ vocalist, and Paul Cook, drummer, before the start of the concert.

BUZZ: How do you feel about all this? (pointing towards carol singers).
JR: Well I’m just surprised that so many grown-up adults can behave so ludicrously childish. Don’t they know their papers tell lies, I don’t think they do – they live in a twilight zone. That’s alright, they can be happy in their own way, but I don’t think they’ve got the right to interrupt my way; each to his own, God loves all kinds.
BUZZ: That’s the only reason that these council officials want to stop this? I mean, they just don’t know.
JR: No, it’s probably because they don’t offer the young generation of Caerphilly anything. They offer them nothing and along comes an alternative and it makes them look foolish. While they’ve been in office they’ve done sweet FA for anybody except themselves. There are people getting blown up and they have the nerve to come and complain about this – ridiculous.
BUZZ: How do you feel about the reaction you’ve had from the national and musical press?
JR: I don’t really care what they get up to. I mean, I’ve known for years that the national press is squalid and that any cheap rumour – they just love it. Yes, and the music press is even worse. Hypocrisy? They live for it. Well good luck to them, that’s fine, they can play their games all day and night. It’s when people start taking notice of them it becomes offensive.
BUZZ: How about the Bill Grundy affair?
PC: We just done it on the spur of the moment, it wasn’t premeditated or anything it just happened, you know? We forgot about it the next day, but I couldn’t believe it when I woke up.
BUZZ: Does the fact that a lot of universities, who are supposedly open-minded people, pulled out of dates surprise you?
JR: Oh no, universities have proved to be the worst. They went on about us being fascist and rubbish like that. Students have proved that they’re not open-minded, they’ve got closed minds; they’re a closed shop.
BUZZ: Do you think of yourselves as part of a passing phase?
PC: People can say that – we’re not worried, we’re not in it to make thousands of pounds, we’re just in it ‘cos we wanna do it and we’re doin’ what we wanna do.
BUZZ: Where do you get your roots from as a rock band?
JR: Just basic honesty. There’s been no honest bands for years, it’s all big moguls and twenty thousand tons of equipment.
BUZZ: What do you think of Clapton and Townshend?
PC: They’re finished.
BUZZ: Some bands are doing things by Townshend, things likeSubstitute for instance.
PC: Yeah, it was alright then.
BUZZ: You think they should have packed it in then?
JR: No, they could have have carried on but they just covered it up in bullshit and hype. They became out of touch, and you can’t like go up to Pete Townshend and say “Hello Pete”, he’s become distant, he’s not even a human being anymore. I doubt if it’s him on stage, he’s like a puppet in the distance.
BUZZ: Do you think there’s a lot of snobbery in rock music?
JR: Yeah, there has been for centuries. Some of the biggest snobs are rock musicians.
BUZZ: Is it all that important that you can play really good music?
JR: No, I don’t think it’s essential, it’s your attitude that counts. If you can express something to someone, that’s it, you’ve got it.

PROMOTER ANDY WALTON DURING CONCERT
BUZZ: How do you feel about the concert?
AW: It’s proved the Council and the people wrong. I don’t know what they were expecting, I mean, I’ve seen the band before, I know they’re just a rock band. I think Caerphilly will be exactly the same tomorrow morning; nobody will be fallen dead in the street, the town won’t be running amok with lewdity and things.

FAN DURING CONCERT
BUZZ: What made you come to see the band? Have you seen them before?
Fan: No, I read about them in Melody Maker and all that. I thought they were right in what they say in that Zeppelin, the Stones and all that have come to be gods. They come here for two tours, they have all their money and big mansions, they’re out of touch with the basics, and that’s what this group’s all about.

CONCLUSION
Only 60 people attended the concert and the police who were out in force had more trouble with onlookers than the real fans. The following day all the local papers and television reports declared that the evening had been a success for the carol singers. I’m more inclined to leave the last word with Johnny Rotten: “Ignorance is the greatest enemy.”

Note: All conversations printed word for word. There has been no censorship whatsoever.