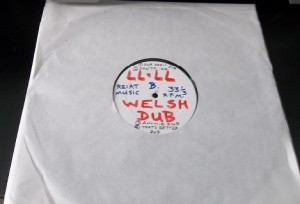 Is it really unfair to “blame the kids” ? They’d sat on my decks in the office, them or their mates, bent the arm and obviously broken the stylus. I’d lost the will to listen to music anyway (no more revolution and all that) let alone play vinyl so the decks gathered dust ……. until late one evening. I’d come home late after some archaeology lecture gig and had done that usual thing of belting up the A470 as fast as possible without breaking the speed limit.
Once I got in the house I realised that I was far too wired to sleep so I flicked TV Channels and came across a wonderful documentary about vinyl on BBC 4. Not just one documentary but two ! – one on 7” singles and the next on 12” albums. All the guests talked about the ‘ritual’ of playing vinyl, of playing the same record over and over again and I was transported back to the late 70’s when music meant everything, more than life itself, when bands mattered and actually changed your life for ever, everything mattered, from the sleeve, to the colour of the vinyl and I totally got the thing of the smell and the stylus and the whole ‘ritual’ ……totally …….
I phoned up my old mate Dewi from Byd Mawr to see if he knew anyone who could sort out my decks and by sheer coincidence got a call from John from Llwybr Llaethog who wanted to send me a test pressing of their new LP “Dub Cymraeg”.  So it was written in the stars …. so I got to it with a degree of urgency, got some new stylus’s easy enough and just bent the arm back – DIY Punk Style – it worked. I’m now sat with the decks through the PA and have got this mighty fine test pressing on ……..
Llwybr Llaethog probably more than any other Welsh Language band (EVER)  deserve some kind of medal. Maybe John and Kevs should be invited to the Gorsedd ? They have hung in there for so long and are still doing it – quite simply only one Welsh word will suffice – ‘Parch’ !
Years ago, we met up with John and Kevs in the Queen’s Hotel in Blaenau Ffestiniog, by that time Recordiau Anhrefn was in existence and they’d actually sent in a cassette (demo tape proper style) of a track called ‘Rap Cymraeg’. They’d been over to New York, realised that Punk was done and dusted and that the next phase was ‘Rap Music’. I can’t tell you how inspiring that meeting was, we had found more allies for our Welsh Underground Revolution and the next record released on the Label was simply lifted off that cassette demo.
Over the years our paths have crossed many a time, in collaboration, in solidarity, in business and at other times our paths have been long and distant ones far apart, untouched  – not destined to cross maybe for a few years. Llwybr Llaethog. They are consistent. They maintain presence. They refuse to give up.
I have no idea if Llwybr Llaethog played at this year’s National Eisteddfod ? I wonder if they were even invited ? As I ponder this thought I think of the young tastemakers of the Welsh Scene today (mainly BBC employees) who hung out for the Edward H concert with 4,000 others on the Friday night of the Eisteddfod. So the revolution is well and truly over and has gone around the Circle Line ….. do they realise that Llwybr Llaethog released records that meant that Welsh Music was more than maintaining the Status Quo (riffs). They probably don’t realise, they weren’t even born ….. maybe Llwybr Llaethog should have done an Adrian Sherwood and mixed / dubbed out the final Edward H concert ?
So the 12” is proper dub, full on echo, shout outs, gunshots, wibbly bits. This is soundsystem stuff. I hear Jarman and Dave Datblygu echoed around the room and horns, great great reggae horns. This is “Welsh Dub” and even today, 2013, Llwybr Llaethog prove it’s possible, it’s entertaining, it vibes up the senile man (quote Mark Perry).
Those who grew up post Slits, post punky reggae party, post On-U Sounds will get this. This is not a cheap copy, not imitation, this is the real dub deal. This is still revolutionary music, if such a thing is possible in 2013 – then this dub 12” reconfirms. They could support a band like Primal Scream I guess if Edward H are never to ask again for a dub mix, but again it dawns on me that they will surely be overlooked by Festival No6, Green Man, Womex …… again I don’t know, but surely, surely someone somewhere should realise the contribution these guys have made and just give them a stage, a decent billing and a decent wedge.
The best thing about this 12” is that it takes me back to a time when music mattered, I no longer feel like an ageing 51 year old archaeologist punk has-been who can only snipe from the Blog sidelines that it’s all shit out there and that there’s no revolutionary message within Welsh Culture any more. Don’t listen to me. Check out the 12”. Turn up the bass. Warn the neighbours that walls will shake.
Llwybr Llaethog re-affirm. Pagan God Bless Them !

What Is It With Wolves…? GIG REVIEW – Rebellion Festival, Winter Gardens, Blackpool (Thursday)