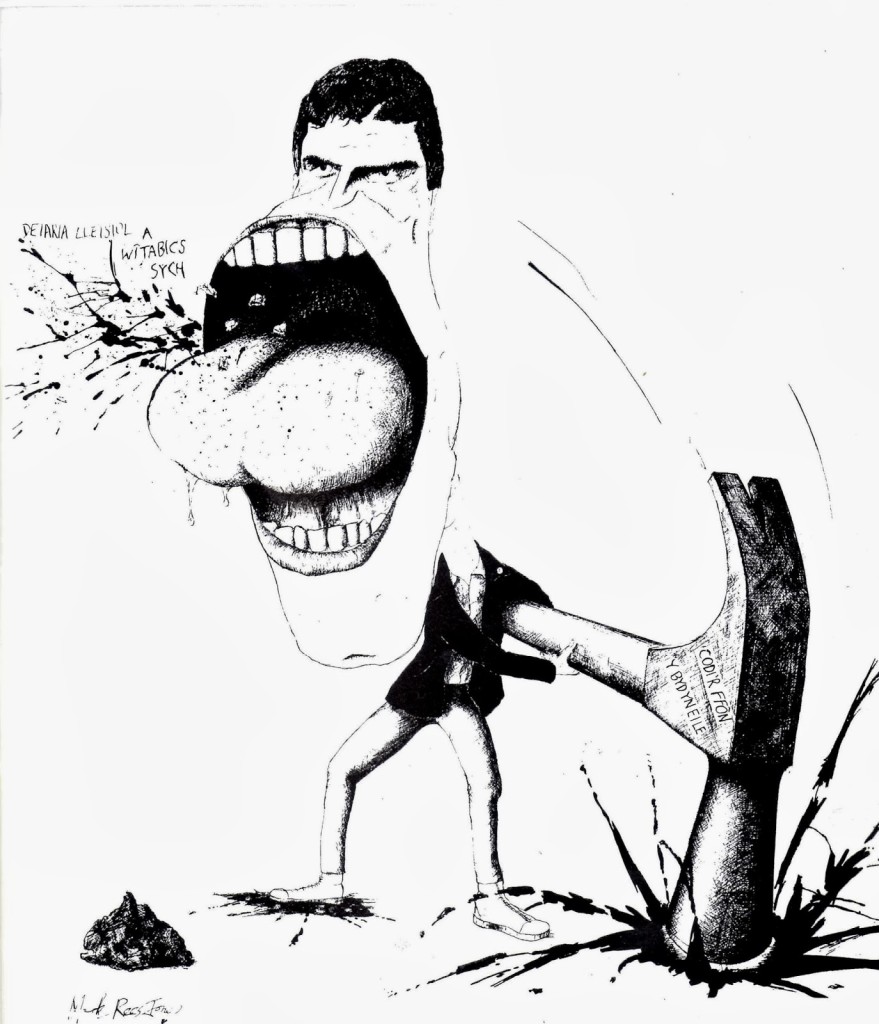 Now let’s be clear here, highlighting this point  will inevitably be seen as a moan and groan about not being paid etc. My point is really not about the money but that what I said in the interview has already been proven. If there’s no airplay then it makes little difference who collects the royalties, and as I said in the interview, yes I do support EOS politically but my fears of the status quo (riffs) being maintained were well founded.
Maybe the Welsh MOR bands are better off and good luck to them. I hope the young emerging Welsh bands are better off. Us lot, as ‘heritage’ acts and Labels hardly register, so no real change there. The interesting question perhaps is where do we go, from here ?

The other difficulty here as I found with the interview with Clancy Pegg for her forthcoming book see previous blog is that things get misinterpreted. I know Crud wants to stir up the shit but this piece was an attempt to look at how people deal with bands such as Traddodiad Ofnus or Llwybr Llaethog today, are they recognised, appreciated, discussed or even once in a while invited? I thought these were valid enough points. Not the money, but the almost total lack of any awareness of Welsh language pop music and cultural history – Traddodiad Ofnus being a case in point. (The Datblygu retrospectives no longer count – too easy !)

Really it’s just to say check out that wonderful 7” by Traddodiad Ofnus, simple as that ……

We did produce 3 studio albums amounting to a total of at least (at least) 35 songs, more if you count compilation tracks etc and only one song in all that repertoire ever get’s any airplay – ‘Rhedeg i Paris’

My point is more about the selective hearing of the Welsh language music scene, just in the same way as the Welsh Arts scene has selective vision and the Media have both selective hearing and vision – again this is quite interesting – why we have this narrow vision in Wales, from all sides, in both languages – I still blame the Methodists – in fact we wrote a song about this once called ‘Methodism Got To Them Big Time’ with Land of my Mothers, unreleased, unheard, a good demo …… it’s on a compilation called ‘Post Punk, Post House, Post Welsh’ – a bit underground that record …..
http://www.discogs.com/Anhrefn-Defaid-Skateboards-A-Wellies/release/368533
http://www.discogs.com/Anhrefn-Bwrw-Cwrw/release/368537
https://itunes.apple.com/gb/album/dial-y-ddraig-dragons-revenge/id202608310
New Album – I FIGHT LIONS – I Fight Lions Subvert Festival 2013 @ Fleece and Firkin, Bristol