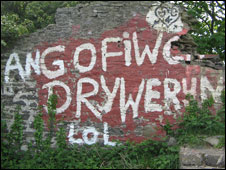 I’ve just finished doing a review of a CD called ‘Caneuon Protest’ a compilation of Welsh Language protest Songs and a broader discussion of where the protest song sits within popular culture in Wales today for BBC online.

One answer I gave was that the recent ‘ang ofiwch Tryweryn’  (sic) artwork (pic above) that Y Ffug have been causing small scale outrage and controversy with within the world of the Welsh Trydarati is a good example of where things are at today. Maybe these kids need to define their own culture, their own Welshness, their own time –  the here and now. Maybe they are sick of 60’s Campaigners and Welsh Nationalists telling them about Tryweryn 1965 o’r Pont Trefechan 1963 or whatever. Or maybe they are merry pranksters, art-situationists ?

The Ffug artwork is very much in the Jamie Reid / KLF / K Foundation/ Jimmy Cauty tradition. It’s the only thing they can do in a way, distort a listed artwork, distort a Welsh Icon. It reminds me of Bunf, of Super Furries saying in an NME interview “I don’t give a shit about Wales” at the height of Cool Cymru and flag waving by Stereophonics and the Manics at Stadium gigs.

Naïf ? of course but we’ve all been guilty. Naive is not necessarily bad – not if  the sentiment or statement is good. You learn, shit flies and the argument matures. Lose your naïf and there’s a danger you become a jaded old cynic, an angry old man – now then there’s plenty guilty of that one…

However, one good thing from writing the piece for the BBC is that I am checking out the merry pranksters and listening to an album called ‘Trapped in the Game’ by Radio Rhydd. This is really the sort of stuff we grew up with, bits of Crass, Rage Against The Machine, hip hop, very angry, pissed off, swearing thrown in as often as possible to accentuate the pissed off-ness.

Guitars are punky and razor sharp, vocals are more Tystion than Datblygu. This is good. Message wise I don’t doubt that this is bang on the mark, and they definitely “mean it maaan” you can hear that just by listening.

Radio Rhydd are on the Afiach Label and everything about this CD and the Label screams anarcho-punk, squat culture. Again we grew up with this, we all read the Crass handbook, we nicked Malcolm’s “non-rule Book” and then went out and spray-painted a new cultural manifesto for North Wales or wherever. This is press Repeat.

Interestingly Crass and anarcho-punk  have now become the subject of discussion panels and academic research (see here) – someone got in touch about a Crass gig in Meifod Village Hall 1982. 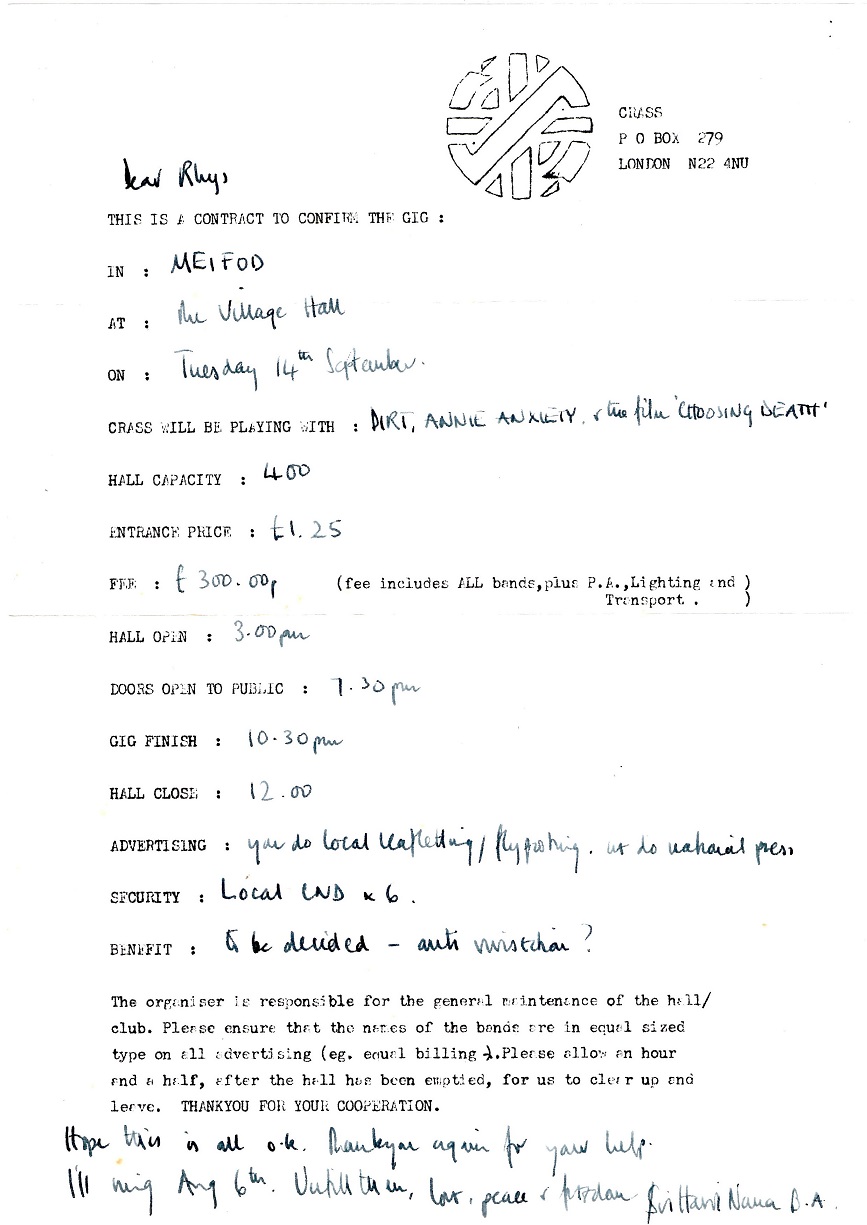 Back to the CD

– I’m enjoying it, I love the Welsh accent when they do bits in English, I love the anger and the missiles, I love the targets, I love the delivery and raps, I love the fact that this comes from Bethesda an arguably Post-Industrial town that once gave us Maffia Mr Huws a great rock band from the 80’s.

I love Efa [ex Stilletoes] and Afiach for maintaining an Underground. I love that fact that these guys know they won’t get on mainstream Welsh Media and that’s not an issue. They understand the concepts of creating a scene and making a stance. They draw a line for sure.

The only minor question I have for them all is do you still worship the spraypaint and the fanzine ? I know they all tweet but how do they utilise the technology of today to move the agenda forward ? There’s really not much on youtube or maybe that’s too obvious ???? The promo video is there for ‘Trapped in the Game’

– how does the agenda move forward ? This is familiar territory for many of us, that’s not all bad because it’s good stuff but it’s Press Repeat rather than the next phase or have I just turned into that cynical old bastard ???????