Bore da, and a very Happy New Year to yas. A little late, granted, but it’s still January and I have the excuse of having had one of those nasty bugs that were doing the rounds. Poor Mickey. I was going to say “Hey, that’s Christmas over for another seven months, the Easter eggs are in the shops and they’re trying to sell us summer* holidays.” (*Summer; expand your vocabulary, look it up). Going to. You know… because the ads for it always start appearing by August, so I was having a pop at the greedy bastard capitalists who aren’t yet satisfied with the current levels of global bankruptcy. But this year they’ve gone even further, I’ve ALREADY seen an advert in a TV mag. January 15th. For next Christmas. 344 days to go. Fucking insanity. Insert rant of your choice here, I really can’t be bothered with it any more and hereby tender my resignation from the human race.
What a miserable way to start my first blog of the year, innit? Let’s go a little more upbeat; Summer. I see you all scratching your heads, wondering what the strange man is on about. I can’t just drop in unintelligible words and then not explain them, can I? No, of course not, it’s tantamount to mental cruelty. And it’s not like anybody under 17 would remember one either. In the old days, we used to get them in the middle of the year, you’d have a couple of months when it was really hot and you could go outside without a jumper on. Twas one of these when I first met Neil Crud, who I’ve just completed an interview with for The Magic Net. What a fantastic link, I’m going to spank myself with a paddle later on. Anyway, I’m sure you’ll want to take a peek. Oh, at the interview, not me spanking myself with a paddle! I mean, what kind of person would that make you? Hopefully, it’ll be published by the time you’re reading this, so follow the link at the end and enjoy muchly. 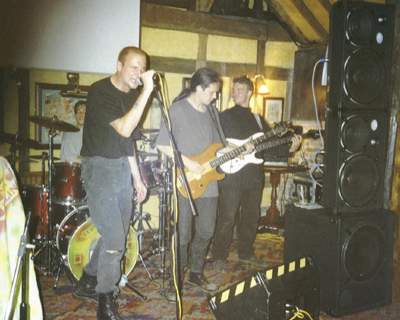 Meanwhile, let me tell you the story of that first meeting. Once upon a time, Neil and the rest of Sons Of Selina (pic above) were booked to play at a festival in the Netherlands, in the July of 1995, to be precise. That’s genuinely why they went there and their visit had nothing whatsoever to do with drugs and child porn. They weren’t supporting Gary Glitter or anything like that. I love you love, you’re only two love. Anyway, I digress, which is quite unlike me. Neil had asked if I could sort a gig for them on their way back to Rhyl, said he’d bring me back some dr… er… chocolate, if I could. It was a tough task. I mean, this band were signed to Richard Allen’s Delerium Records, they’d done a live session on BBC Radio 1 for Mark Radcliffe, it’s not like I could just book them in my local pub or anything. There’s nothing wrong with The White Hart in Frimley, my old band (Magic Moments At Twilight Time) had played their second gig there. But there’s a world of difference between a local band’s second gig and a follow-on gig to an international festival for a signed band who’d played live on Radio 1! They were counting on me, I couldn’t let them down. I asked around some of the bands I knew in the Surrey Heath area, just see if any of them had a gig that particular Sunday night and had room for one more on top. Serious Plankton (pic below) came to the rescue, da-da! “We have a gig on that particular Sunday night,” they said, “and we would love to play with Sons Of Selina.” It was destiny, surely. “Where are you playing?” I asked. “The White Hart in Frimley.” They replied. “Fuck it,” I said, “that’ll do.” 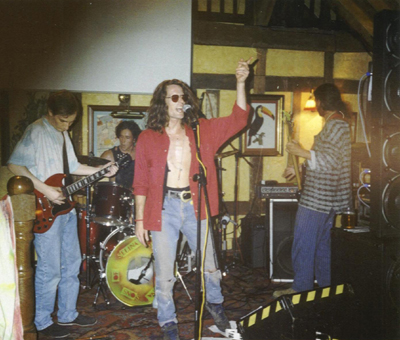 Neil was excited when I told him, I could just tell he knew this would be a high point in his musical career, don’t ask me how, call it intuition. In his exhilaration, he sent me some singles and a promo photo and I duly passed them along to the local paper and the wondrous promo machine that was Adrian Creek’s Pop Scene. With nervous expectation, come the Friday before the gig, I ran all the way to the paper shop. Don’t worry, it was only next door but one. But I was a bit puffed out, if I’m honest. Hurriedly, I flicked through the pages to seek out Adrian’s groovy logo, how cool would it be seeing Sons Of Selina in our local paper? But the bastard hadn’t even put it in the gig guide, let alone used the photo or written a solitary bloody word about them! I had visions of them playing to an empty pub and kicking me round the car park afterwards. Not like I could just not turn up, they knew where I lived. I could save this situation, I could impale Adrian Creek on a large spike in the middle of Frimley High Street, then they’d realise it wasn’t my fault. But he had bought me a curry just recently, so I thought better of it. Plus B&Q had sold out of large spikes. Ah, the best laid men of mice with plans, eh? 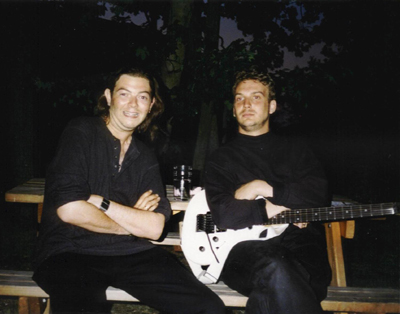 Sunday 9th July soon came, an absolutely sweltering hot day, 33° by 10:00 a.m., so I got out of bed. Sons Of Selina were due in Dover quite early in the morning, I was expecting them at the old Frimley M&E HQ circa lunchtime (Steve Bonehead & Martin Wilding pic above). And I wouldn’t even have Sam there to protect me, she had to go to work. Poor Mickey. The disgustingly humid afternoon came and went, no sign of them. It was fast approaching opening time (this was before our current free-for-all licensing laws), so I figured I may as well walk down to Frimley and hope they turned up in time. As I arrived in the pub car park, I noticed this battered old van, surrounded by a lot of degenerates. “This must be Sons Of Selina.” I thought, and walked over to introduce myself. Neil, it turned out, was inside the pub, so I strode in to look for him. “Now where’s a nasty looking scraggy bonehead?” I asked myself, eyes scanning the back bar. And there he was, sweat dripping off his forehead. “Well,” I said, “you look like a right thug!” He looked up and his eyes met mine. “Fuck off, you southern twat.” And then ran off. I’d like to think he’d taken one look at me and thought, “Ooh, I’d better not mess with him!” But it turned out he and Cumi Pants (the drummer, pic below centre with Robin & Steve Sync) had picked up a nasty dose of the shits in Holland. 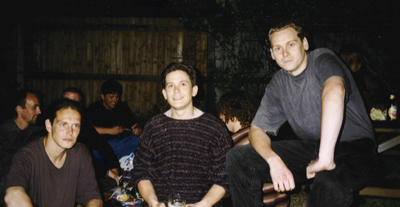 As luck would have it, Serious Plankton offered to play first while tummies settled, so I won’t do the joke about them being a gothic offshoot of Jovial Plankton. By the time Sons Of Selina took to the stage, the temperature had plummeted to a mere 32°. They played an absolutely smoking set. Richard Allen had told me they were a truly excellent live band, and they proved him 110% accurate. Sadly, it was to an empty pub! But I couldn’t blame Adrian Creek, it was simply down to the heat and humidity. Fortunately, with the doors and windows wide open, you could hear perfectly in the outside seated area and car park, so that’s where everyone had gone. Ultimately, it wasn’t a bad turnout, especially considering the great lack of local publicity. A great night, really good to meet Neil and the guys and finally have the chance to talk to them at some length. Apart from the odd toilet dash, of course. I didn’t think they’d appreciate me chuntering away from outside the cubicle. As with most great nights, it flew by. Almost before I knew it, they were off in their battered old van and on the long road back to North Wales. No sooner had I waved them goodbye than Ian Merrick, Serious Plankton’s bassist, came running over to me shouting; “They’ve fucked off with our money, the bastards!”

Now, I don’t want to make Neil feel guilty or anything, but that was actually Serious Plankton’s last ever gig. They had to sell all their equipment after that just to keep food on their tables. You’d often see them outside The White Hart, sitting cross-legged with little begging bowls in front of them, eyes darting around the gutter for any prematurely discarded rollie butts. Singer Chris Carter was so financially devastated, he couldn’t afford to live in Surrey Heath any more and had to move to Northampton. Ian Merrick was reduced to doing ‘Jungle Book’ cover versions to make ends meet. Oo-be-doo. I last saw Adrian Creek at a football match at Farnborough a year or so ago, he pretended he didn’t know me. And Neil hasn’t yet asked me to get him another gig.