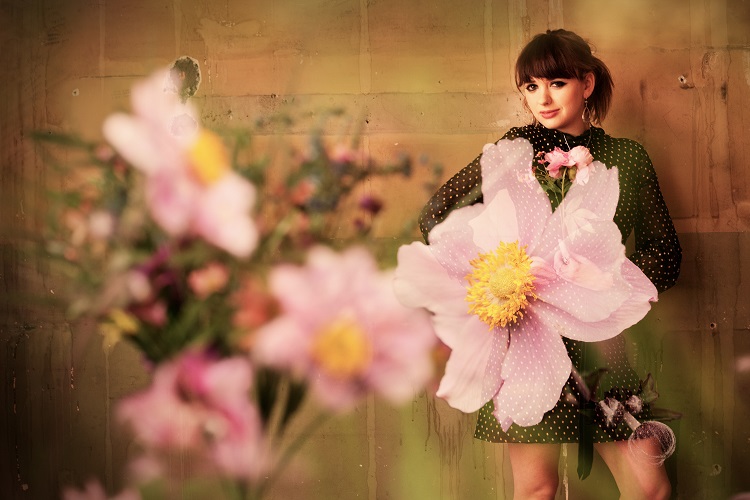 In old school terms, in 7” vinyl terms, ‘Week of Pines’ is obviously the single, title track, call it what you like, but once again it’s very,very good. In old school terms this would have been released a couple of months in advance, as a taster, get you hooked so that you went out and bought the album and went to see the artist on tour. Again job done.
This track is both catchy and moody, it has an edge but it’s an undefined edge and by that I mean not so much that the artist has not defined the edge or is still looking for the edge but rather that Georgia has already created her own edge. If this edge is undefinable then that is a compliment to the artist.
So let’s get on with the good bits.
Georgia Ruth has managed to make an album with the harp, that most traditional of Welsh instruments (well it would be if it was y Delyn-deires) that is, to use a vastly over used adjective, “sexy” and she’s done that effortlessly. This very, very good album has set a new benchmark, a new milestone on the ol’gravel road. (The gravel road bit acknowledges the odd bit of southern soul / country got soul hints we get once in a while as a gentle touch of something extra on this album).
If Linda Plethyn was the first diva of Welsh folk music and Cerys has undoubtedly set another milestone with ‘Tir’ then ‘Week of Pines’ is a worthy successor by the new pretender to the throne.

Georgia has also created a wonderful image, that one with the roses in her hair. I would have given the album a very, very good review for that image alone.
As the late, great, Tony Wilson always theorised, real talent has a way of finding it’s way through all the dross and I’ve always wanted to understand what all the fuss was about with Georgia Ruth. I’ve yet to see her live but the whispers suggested check this album out. 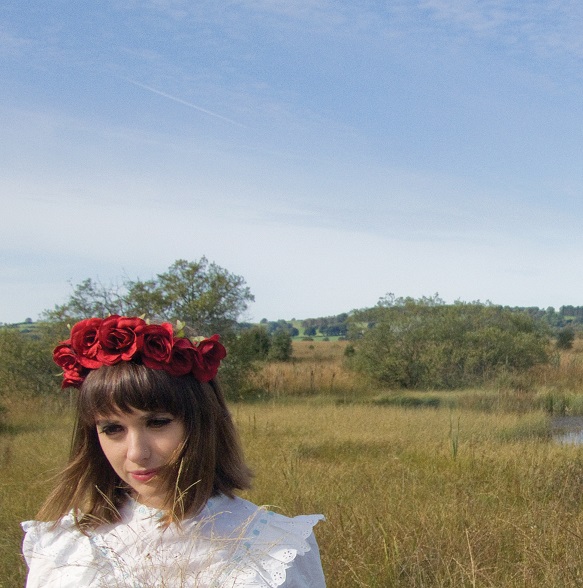 Track 2 ‘Hallt’ as an Ivor Cutler style drone. Does anyone remember Cutler ? Always featured on John Peel, when radio both informed and entertained and meant we could never get to sleep before midnight. So we listened to Peel in the hope of hearing the new Clash single and got Ivor Cutler instead – great, as I said educated.

‘Hallt’ if anything is the most unusual / radical Welsh Language track on the album and I did get an impression that the Welsh tracks were more traditionally folky – which may be a coincidence or may be nothing at all. Maybe Week of Pines translated into Cymraeg would be cool ?
On the photograph accompanying ‘Mapping’ we see a rural landscape with a Giles Gilbert- Scott red phone box (somewhere in the sequence K2 – K6). This is image very Mike Parker, ‘Real Powys’ a real psycho-geographic image. If this was a 12” album we would be staring at the sleeve while listening to the songs. The song by the way is as cool as the image – it stands up to the Giles Gilbert Scott phone box, quite beautiful.
So folk album yes, obviously, but there are bits of Irish and Country in there, and of course all those share common traditions, but this is done always with subtlety and mood and that omnipresent edginess that we fail to define. The overall feeling with this album is that it’s finely tuned, almost mature, confident, assured, classy – to put it simply it really does feel quite right.
The ‘backing band’ whom I recognise as Cowbois Rhos Botwnnog do an excellent job. They do what most musicians fail to do. They do not do too much. They do what is required at the right time in the right place. David Wrench also does a sterling job in the producer’s seat. Again it’s all just very, very good, almost faultless.
And finally the not so good bits (but really not bad)…
If anything the last two tracks are the only ones where you wonder if they are slightly at a loss as to what to do. ‘A Slow Parade / Winter ?’ could have been left out without too much damage as could ‘Track 11’ but we might be closer to a mini-album scenario then. I was totally convinced up to track 9 and then just thought that they had maybe worked so damned hard that they took their eye off the ball for a minute. Minor criticism when you have written a track as good as ‘Week of Pines’.
On that basis let’s give it 9/11 or let’s just go for **** review – either way this is a very, very good album.

Footnote.
Final criticism which has nothing to do with Georgia Ruth or the band, was that we had to chase up the Label for a review copy – which to their credit, was sent out First Class as were the photos, but these PR types and Label Managers with their M4 strategies and 6Music plays league tables should at least be looking out for sites such as link2wales, blog is the new cool. I’m an old fossil from punk days so I no longer qualify for review copy status but link2wales should surely be on the mail out list as a Welsh platform – and that applies to all the Welsh labels – support the local blogs !