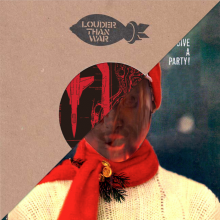 When Brother John Robb asks you to review a single, you comply or die; despite the cheeky fucker not sending you a review copy.
Released through his Louder Than War website, Mueran Humanos are Argentine electro-terrorists who, with their new single Culpable bring a sense of well being into your living room. This may sound a little odd for a Louder Than War release, who do things the punk rock way, but it is punk rock in the sense that it’s different, it’s simple and it’s compelling. They have a mono-synth bass line stabbing the whole track along, making the 60bpm drumbeat seem a lot faster than it actually is. Throw in some lovely spacey swirls and a trance like wash to accompany a sweet half narrated voice and you have a gorgeous single.
Close your eyes and you find yourself downstairs in a seedy nightclub, where dead heads sit around not talking, the dry ice is thick and the lights are low. Mueran Humanos’ Cupable is ebbing from the speakers and the local psycho-goth in a fishnet vest and leather pants is dancing by himself, immersed in the hypnosis of the track.
For those five minutes I am that local psycho-goth, and I am now also five quid out of pocket having just ordered a vinyl copy from this website.