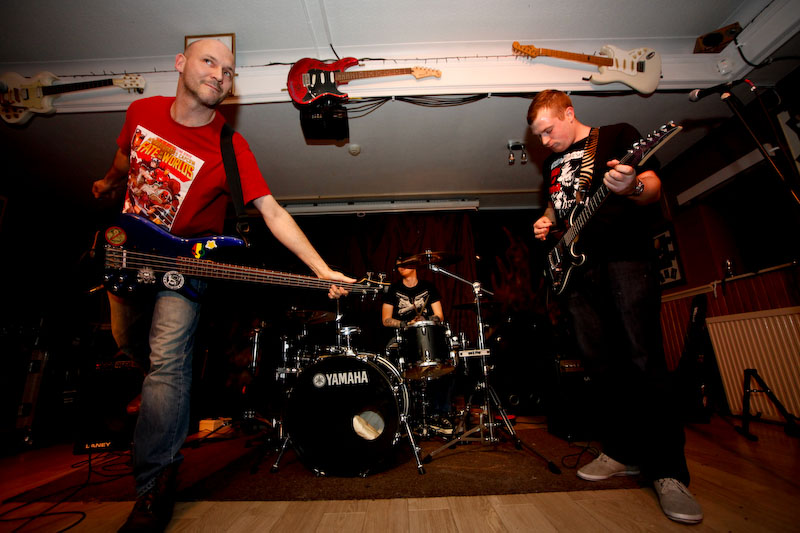 (neil crud) – Last year, on a brain cell killing trip around the pubs of this fair city, we stopped off, as we usually did at The Chester Belles to sample the delightful jukebox and gawp with envy at the superb array of guitars chained to the walls. Much to our dismay, the place was being painted a souless white and Lee the landlord (a purveyour of fine music) was gone.
So it was much to our delight to chance upon Flookersbrook and learn that Lee has taken his guitar collection and created a ‘proper’ venue, with a proper stage, lights and a rig and love of live music. Being a purveyour of fine music I’m not sure what Lee thought of us! Ha ha! So hats off to him and Core Promotions lynchpin Dan Read, and long may it continue. 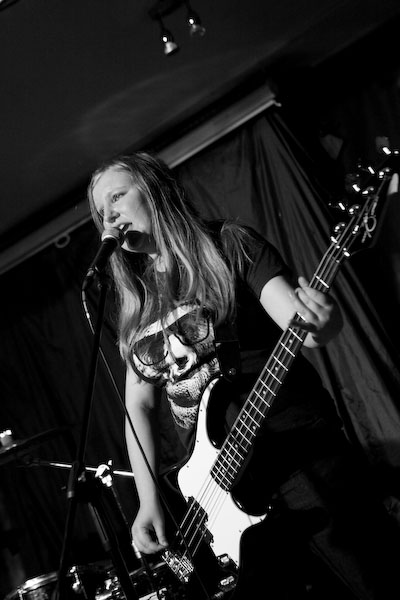 I’ve seen Jed Is Dead before at one of those awful Battle of The Bands competitions. I say awful because of their concept, the actual evening was pretty spectacular insomuch that the bands got to play on a big stage in front of a few hundred people with a great sound and lights. Jed Is Dead didn’t have a hope in hell of winning that night, nor did they particularly care, they are too leftfield to win prizes and those competitions are usually won by rent-a-mob pretty boys playing other people’s songs. Yet, it was Jed Is Dead who stood out that night for me because they were different; not spectacular, just different, and that’s enough to pique my interest. 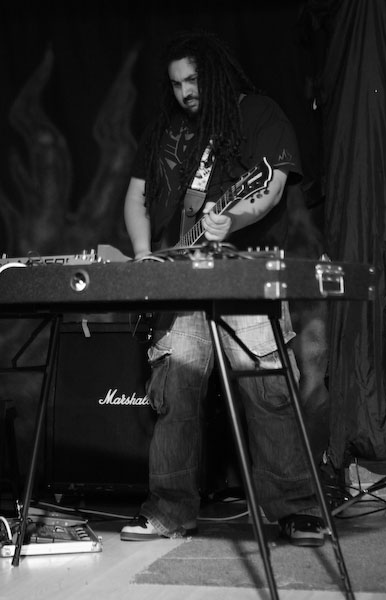 Fronted by the bass toting and shy Emily Gresham (pic above) and flanked by the dreaded, axe weilding gizmo wizard Mickey (pic left), they produce an alternative electro-pop sound that fuses Garbage, Pop Will Eat Itself, dubstep and techno-rock (like in their Daft Punk-esq song Remedy). I first saw Emily play in 2001 as a 16 year old acoustic act at the MASE gigs and at Pigstock Festival in Denbigh, and it’s pleasing to see the spawn of those early gigs where kids take their first tentative (and usually only) steps onto the stage and that evil evil world of rock ‘n’ roll.
They finished on the truly EXCELLENT Stop! – check ’em out – (website)

(philip milton) – Up next are the recently formed Braxton Hicks featuring local legend Joe Hovis on lead vocals and guitar, alongside the infamous former 4Q / Sons of Selina member Neil Crud playing bass and Vladimir Fuxleep Nightshade on drums. The first thing that came across upon hearing them was that they were bucking the more conventional trend of hardcore styles by playing fast but clean. By this I mean Joe was rocking a clean twanging guitar sound and vocals that are determined to be heard to the last syllable. And Crud who played a fast but melodic style of bass that you just couldn’t help bobbing your head to. The next thing was how together they were as a group, ok all three of them have been in bands and the crowd wasn’t huge, but the easy candour, jokes (normally aimed at Vladimir’s super fast paced playing) and the tightness at which they played for a group that only formed in July this came as a true surprise, and with only one gig the Friday before under their belt it shows promise that they’ll be a force to be reckoned with for a great time to come.

Now to the music; they still have only a short set list but it is of their own material, it’s a fast paced social commentary of the things around them that they find disappointing. Whether it’s the government (Government To Be), a former love (a lot less romantic than I think they thought) (Get Outta My Head) or the loss of a dear friend still sorely missed (Gone Fishin’), each song is played full on with an intent to be felt and understood. The playing style reminds me of the Dickies and a little of their influences being Bad Religion and the Dead Kennedys (for more information on these influences go to their website). Of the vocal stylings I’d definitely agree with them that they’re in the same vain as the Subhumans and the Inner Terrestrials, but with Joe as their front man they do have a practised biting vocal styling that is all of their own. I’m going to enjoy watching this band evolve and expand their material, and whole heartedly recommend to people that are looking for something slightly off the wall and original to check them out.