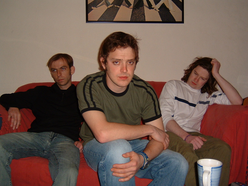 Gabrielle Twenty Five started life sometime in 2001 after Dan Amor and Noel Jones were drinking in the Glan Aber Betws y Coed and got talking about 3 of their passions – music, bird spotting and quantum mechanics. After many beers, vodka & redbulls and cup or two of thai green tea, they decided to start a band. After many more drunken meetings the pair exchanged demo`s and then got together to jam.

After a few months Dan and Noel recorded “The Town Spectacles EP” with the help of Geraint Jones on drums and Andrew Roberts playing some bass on the tracks. Andrew decided not to join the band full time and went on to become a successful seabass farmer. Geraint who was also the engineer at the studio could not join the band either as he got his little finger trapped in a fader on the mixing desk and is still attached to his console to this day.

After many months of searching for new band members, they came across Jason Jones working on a building site, singing and tapping away on the scaffolding to the tune of “I’m a Barbie Girl”, Dan & Noel recall it was a no brainer really, he was our little drummer boy.

Next to join the G25 ranks was Ben(ob1) Marshall on bass, Dan was out shopping late one night at Somerfield when he heard a kerfuffle at the alcohol check out, which turned out to be an unhappy Ben who was smashing every bottle of Pinot Grigio, insisting the bottle he had purchased the night before did not go well with his seafood meal as stated on the bottle.

The new line up started rehearsing in the back of the local goats cheese dairy, and were soon ready to start gigging. The first gig was at the legendary Swallow Falls in Betws y Coed. The band played to a sell crowd and it was said that punters without ticket where gaining access though the gents toilets window, and the queue stretched back as far as the ugly house. This was to be Ben’s first and last gig with the band, as they played a storming set and rocked the venue so hard that Bens amp exploded, and subsequently igniting his hairspray heavy barnett. The last anyone saw of Ben was him sprinting across the A5 with his hair alight, then diving into the Falls. Some say he is now Top Gear’s “THE STIG”.

Now bass-less again Dan & Noel were out on one of their bird watching expeditions in the Ogwen Valley, in search of a glimpse of the greater crested fly catcher, when they heard what sounded like their elusive feathered friend. The pair scrambled up the rocky terrain for a closer look, as they approached the sound, it turned from the sweet sound of bird song to more of a warbling sound like a chicken being strangled. With the source of the noise coming from just over the pending rock, the pair drew their binoculars and peered over. To their shock it was not the fly catcher at all, it was in fact a stark bollock naked John Lawrence playing his didgeridoo. Without any shame or attempt to cover up his bits he invited Dan and Noel to join him for a slice of his homemade maltloaf and a cup of herbal tea. The next part of the story is a bit sketchy, but the next day John was the band’s new (3rd) bass player.
Johns 1st gig with the band was again the spiritual home, The Swallow Falls. After the riotous gig the band have previously played at the venue, the promoters decided to hire Nant Conwy rugby club as security and had Betws y Coed fire brigade to be on stand by. Much to the annoyance of everyone involved, the venue’s promoters had booked the band for the wrong night, and only 6 people and two dogs were in the audience.
Jason was so pissed off about this he trashed his drums, and set fire to them and himself, but luckily for him Betws y Coed fire brigade where on hand to extinguish the situation, only for Jason to run across the A5 following Ben to his watery grave.

With the drum stool empty, well still smouldering in fact, John threw down his bass and starting banging the shit out of what was left of the kit, with one last hit on the snare drum the kit collapsed to the ground. John sprang up announcing he was now the drummer.(no 3)

Back to Bassists (part2)

Once again the band were without a bassist, but soon this problem would be solved.
One cold January morning John was getting ready to go and check the snares he had laid the night before for hares, when their was a knock at the door. John opened up and was meet by a warm smile of a young man wearing what appeared to be a 1920s Russian military uniform. The young man introduced himself as Roger Hughes local candidate for the North Wales green party.

John invited Roger in out of the cold. The young politician began to enlighten John of the benefits of becoming more green and self sufficient. After a cup or two of John’s special herbal tea the two started talking about music, Roger was impressed with how John was rebuilding this old burnt out shell of a drum kit with rabbit and hare skin whilst binding it together with cat gut. He also told John of his regret of not learning an instrument as a child.
John consoled the sobbing politician by saying he could teach him to play bass in less than a hour. Reaching for his fender bass, John set to work removing 3 of the instruments strings, explaining to his new friend you only need one string (the other 3 are for show). One hour later the 2 were making sweet music, and so Roger became the new bass player (no 4). 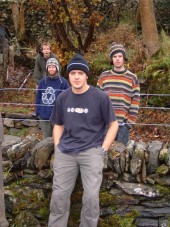 Now with the line up in place the band went from strength to strength, with the release of their new single “Y Dyn Heb Ddyfodol” and successful UK tour, the future looked golden. But once again tragedy was about to strike. The paroles of a growling touring and publicity schedule was starting to take its toll on Roger, he was becoming very distant and being on time was becoming a problem for him.

On the eve of the band’s first US tour Rogers car was found in the car park of the swallow falls. Roger was never seen again.

After much deliberation Dan, Noel and John decided to carry on, Kidnapping Melys Bass player Big Rich to join temporarily for the TV shows that they were booked to appear on.
After placing an add for a bass player in the NME and NWWN, Noel received a phone call off an old friend that he hadn’t seen in a long time, Mark Halford, son of the car parts & accessory giants Halfords, Sir Harold Halford.
Mark had been studying sculpture at St Martins college whilst playing bass in a Rolling Stones tribute band, when he saw the add in the NME. Mark recalls I was a big Gabrielle 25 fan and I already knew most of the songs, so I was very excited when they asked me become their bass player (no 5).

Mark’s arrival in the band happened just as the major record companies were fighting for a piece of Gabrielle 25. The band eventually decided to sign with FF vinyl, because they liked their hair.

After another successful UK tour, John quit the band to go and work on a ranch in Texas, on a new project called infinity chimps, a sanctuary for immortal primates.

With the recording of the new album imminent, the band drafted in maffia mr huws frontman Hefin Huws to play drums,(no4). Hefin never played drums before but that did not matter as he was a very fast learner.

With the new album “twenty more fish in the sea” recorded and another tour completed , Hefin left the band to work as a commis chef for Gordon Ramsey.

With Hefin now gone and the release of the album and a world tour just around the corner, the band had no option but to get Mark to re mortgage his house to pay for a session drummer.

Now armed with session drummer Nathan Williams, the band were sure nothing else could go wrong, but two weeks before Cuban leg of the 61 date world tour, Dan lost a finger in an unfortunate smelting accident and was unable to play the guitar, but as luck would have it former Busted guitarist Ed oleszko stepped in to lend a hand.

One week after the release of the album “Twenty More Fish In The Sea” the band split up abruptly. 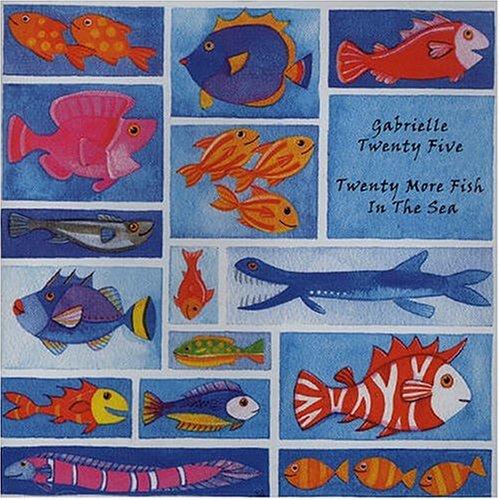