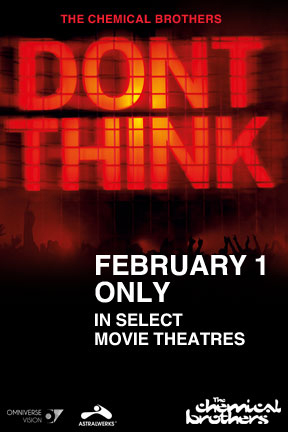 Set to be released in January 2012, ‘Don’t Think’ captures the full Chemical Brothers live experience on the big screen for the first time.

Directed by long term visual collaborator Adam Smith, the film gives fans the chance to experience a Chemical Brothers set from the centre of the stage as well as from the heart of the crowd, from where cameras were placed to perfectly capture a fan’s eye view of the heightened emotional reactions of the audience seeing the band at their very best.

‘Don’t Think’ was filmed using 20 cameras at a headline show at Japan’s Fujirock Festival, and is the first time the full Chemical Brothers’ live experience has been captured on film.

During the film, Smith takes advantage of one of the most unique festival settings in the world when he follows selected audience members away from the stage and out into the natural environment. Then, by adding avant-garde magic realist moments where trippy visuals leave the screens and invade the open spaces of the festival, Don’t Think undergoes a transformation from concert film to fully immersive document of one of the most mind-bendingly psychedelic live shows ever seen.

Director Adam Smith said “The aim was to create a different type of concert film for a different type of show. I wanted to capture what it is like to experience the show from right in the middle of the crowd as well as showing and combining the visuals featured in the show with the footage we captured on this one night; to see how the music and visuals emotionally affect and connect with the audience. Over the course of the film, we are taken on a journey through the psychedelic trip that is the Chemical Brothers live experience.”

Shot on location on Sunday July 31st 2011, ‘Don’t Think’ is the first concert film to feature glorious Dolby 7:1, surround sound, mixed for the big screen by the band themselves.