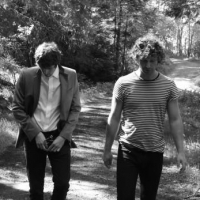 THE foppish decadence of those traditionally referred to as the Bright Young People is not something you would immediately associate with Rhyl.

As hard as it is to imagine some 1920s upper class cad lounging nonchalantly around the Sun Centre, it is even harder to associate them with straight up, backs-to-the-wall rock and roll.

“I was just reading up about this group of aristocrats running amok and liked the idea,” explains drummer for Rhyl’s Bright Young People Casey Ingram.
“It’s a bit ironic, really. I mean they’re, or were, posh and we all grew up in council houses.”

You may presume that the Rhyl version have a similar approach to the ideas of hedonism – something to which their high octane sonic barrage and track titles such as My Cocaine will attest.

“We have quite and eclectic set of influences, people in the band listen to a lot of things from Howlin’ Wolf, Little Richard, Buddy Holly and the Crickets to Queens of the Stone Age and The Cramps – A lot of Detroit bands as well.”

The drummer dismisses, as influences may suggest, any idea the Bright Young People may be a straightforward rock and roll band.

“We’re not obvious like that. We try to straddle a few things and bring in punk and more traditional things,” he says.

“We’re not sure how to describe ourselves. We’re waiting for someone to come along and tell us in a review or something like that.

“The band just give whatever comes out. I think the important thing is how much soul you put into it.”

Everything is turned up to 11. Full on distortion covers relentless larynx shredding vocals not a million miles away from The Stooges or Black Rebel Motorcycle Club.

“We’ve definitely changed since we’ve grown as a band,” continues Ingram. “Not out of recognition. Me and Lee always knew we wanted a bass.

“Beforehand it was two years of peddling endless gigs in Manchester and London.

“There’s not much in Rhyl at all. It used to have a good venue a few years ago which used to draw in a good crowd but when that closed there hasn’t really been anything to replace it. That’s part of the reason we got out into other places.

“It’s mainly London, we’ve done a couple of shows down there. We’ve done the endless run of gigs here so we decided to make a go of playing in the big cities.”

If you were to imagine if The Bright Young People had a mission statement it would be just to produce songs born to be played loud. Very loud.

A look to the future and aside from gigs in London, the group will play Crackling Vinyl at Telford’s Warehouse in Chester on July 20.
You can listen to Bright Young People at soundcloud.com/the-bright-young-people and follow them on Twitter at @The_BYP.