Blog Steve Rastin – Another Music in a Different Kitchen

Another music in a different kitchen, eh John? 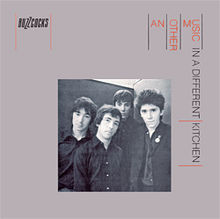 Yeah, well I never did find out quite what the Buzzcocks meant by the oblique title of their debut album but it is a phrase that in many ways embodied the attitude of the artier end of the punk and post-punk movements, suggesting a willingness to be open to different sounds and other flavours.
In today’s climate the mixing and matching of musical styles on the international stage is by and large accepted as a given.

It is fairly easy to keep tracing a movement that gathered pace in the mid 80s when Rick Rubin’s Def Jam label in particular melded the apparently disparate worlds of heavy metal and hip hop into a hybrid that was the most powerful and invigorating sound of its age.
At about the same time indie kids at the Hacienda embraced the house and techno sounds coming out of Detroit and Chicago and the ball was rolling, gaining a momentum that made it impossible to prevent the smashing down of traditional musical barriers and the embracing of all types of sound within a single, global village attitude.
OR DID IT?
Here in North Wales I’m not so sure that we’ve really embraced this brave new world with anything like the enthusiasm demonstrated elsewhere.
A casual flick through local gig lists will quickly yield details of indie nights, metal festivals, dubstep events and, no doubt, Australian sheep shearing shanty gigs.
Each of them operates in their own insular little world and offers an apparent cold shoulder to anyone who, god forbid, might want to hear a bit of Swedish House Mafia alongside their Vaccines or a side order of Skrillex to go with their asking Alexandria main course.
Promoters have to take some responsibility for the situation because music fans can only attend the gigs offered to them and it is far easier for a promoter to publicise a gig when it’s easy to hang a tagline like indie or metal on it.
However, some gig goers exacerbate the situation by being extremely vocal in their opposition to anything that doesn’t conform to their narrow expectations and the majority of promoters consequently seem to be takingh the path of least resistance and are staying within set generic boundaries.
It’s a pity because the best local gig I’ve been to recently had the Funspoilers playing a live set of psychgaragepunkfunk alongside a dubstep DJ set from Josh Bryan before the night ended with a 70s dub reggae mixtape booming from the system.
Absolute bloody magic on a musical level and, wonder of wonders, playing to a rammed out venue that felt more like it was hosting a party than a gig.
Will we learn from the experience and carry on down the trail that was blazed on the night?
I hope so, but I suspect it’s still going to take a massive amount of work, not least because the other underlying problem with North Walian gig goers is a discernably parochial attitude.
I Fight Lions are one of the shining lights of the current North Walian circuit, playing an angular, danceable brand of indie that is lyrically right out of the top drawer.
However, their latest gig in Rhyl drew a relatively small crowd that took an age to warm up, though it is to the band’s credit that they eventually had the punters dancing along and calling for an encore.
The problem?
The band are from Llanberis and the absence of mates/lovers/siblings/pet goldfish in the band’s line up meant that most of the good people of Rhyl stayed at home, waiting for their tone deaf cousin’s band to announce their next gig when they’ll no doubt turn up in their droves.
That’s not a dig at Rhyl specifically as I’ve seen the same thing happening across North Wales from Holyhead to Holywell, but it illustrates that second strand of the difficulties encountered in trying to get gig goers to have a more open-minded attitude.
I hope that ultimately we are offered more gigs that are musically diverse and I hope that we support musicians because of their quality rather than through purely familial considerations because the same old music in the same old kitchen is, to be perfectly honest, pointless.
Everybody’s Happy Nowadays? We’ll see!!!!
Inferno – The Hand is Quicker Than The Eye Hallowe’en Havoc in Chester