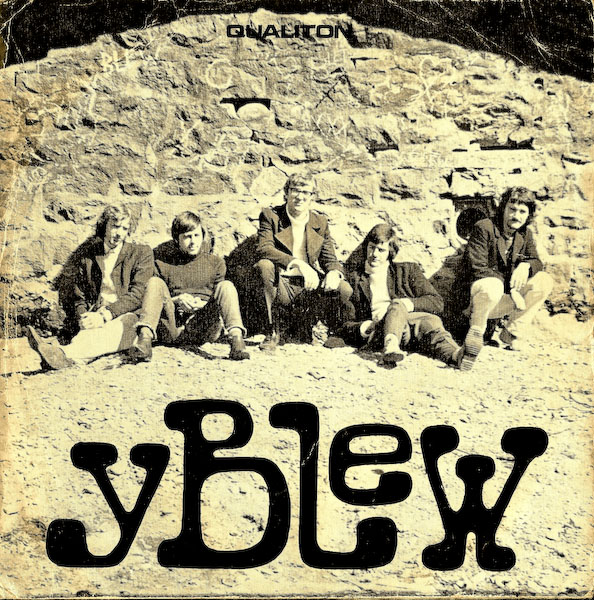 There are few really iconic Welsh language records that top Y Blew ‘’Maes-B’’ on Qualiton Records (QSP 7001) (1967).
As collectors go only Albums like ‘’Gwymon’’ and ‘’Outlander’’ by Meic Stevens and Endaf Emlyn’s opus Rock Opera discs get close. Only a handful of collectors seem to have a copy of this disc with picture cover, ones I’ve heard of include Mici Plwm, Gruff Rhys, Huw ‘Prestatyn’, John Hywel Morris, Owain Cob, Gari Melville, National Sound Archive Of Wales etc etc. (I have two copies somehow). Few Welsh radio stations have and one or two DJ’s.
The record ‘’Maes-B sounds very like an uptempo Mod record ala Spencer Davies Group almost Northern Soul but with a psych breakdown in the middle. It is almost mystical and a good conversation piece. I’ve left one in my will to producer Dyl Mei who has probably most Welsh records worth collecting, but to date not Y Blew.

‘’Maes-B’’ is the youth sub-culture field of the National Eisteddfod where a lot of young people get their first sexual or drug/booze experiences and get to see cool bands not choirs!

There are a few documentaries on Y Blew who at the time were ignored by Radio Cymru by the sound of it! I’m sure you can download the track itself but it’s the ownership of the disc that still seems to lift your status above mere SRG mortals! Why the disc is so rare is also a puzzle, bucket loads of Qualiton, Cambrian, Wren etc releases clog up Car Boot Sales and Charity Shops, but to date I’ve never seen one among hundreds of Tony Ac Aloma EP’s. I presume Qualiton pressed about 500 so either they were poorly distributed or the band trashed a box or two, or somewhere in Pontardawe lie these rare discs.

Dyl Mei still holds the dream of finding one at these places, a bit like me finding The Andantes ‘’Like A Nightmare’’ on Motown/V.I.P. in Mona Car Boot, not realistic.

Price wise for a mint copy you’d pay between £300 and £750, some psych/garage band collectors have copies and 60’s pop stars.

I’ve often thought it would be funny if there was y ‘Record Y Blew’ owners club like a Mini Car Club or something, you only get in to the yearly gathering on proof you have a copy! I can see myself turning up with a sexy security guard handcuffed to a briefcase containing the disc.

Few people ever see the value of Welsh Pop Culture until it’s way too late, the BBC used to have librarians who guarded this commodity with their life, then sacked the lot so a lot has been lost, if you trash your heritage don’t be surprised if it comes back to haunt you.

I don’t display much musical rarities about my place but the two copies of Y Blew sit on my lounge unit as a bragging and why not? I don’t need a Bentley Sports and a WAG, I’m Johnny R and yeah I got The Blew Record!