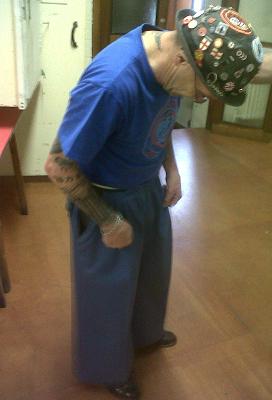 Writing anything about northern soul can be dangerous! This underground scene dissects everything to a micro-degree and it’s DJ culture can be elitist to the ‘outsider’. What is a ‘Northern Soul record’ ? Well, you either know or you don’t, that in itself alienates I’m sure. Technically northern soul is a mainly a working class sub-culture of mod-ism to a backdrop of Motownesque sounding rare mid-sixties 45’s from Detroit, Chicago, New York, LA etc. Flops in the States picked up by amphetamine gurning teens in dancehalls mainly around the north west of England in the late 1960’s early 1970’s, the main temple of hedonism then being The Wigan Casino with its all-night dances.

Northern Soul was my first music love, along with whatever was on Top of The Pops and weird electronic LP’s my brother played at home, some Welsh language pop on HTV, and early punk that was all my teen backdrop.
North Wales contributed a fair sway of devotees and today names such as Soul Sam (Wrexham’s Martin Barnfather), Steve Thomas from Holyhead, Chico from Colwyn Bay and John Gwyn Pierce from Holyhead, Bangor’s Gerald Hogan, Alan Jones, Warringtons Brian Rae (now based up the Coast) and many others keep the faith going by putting on many well attended dances all over Wales that go mainly unreported or publicised.

I’d probably be termed a ‘Part-timer’, ‘Bit of an oddball’ or ‘Hardcore Detroit collector’ by most of ‘The scene’ today as I tend to go to a cluster of events then ether away for a while dipping into SRG (Welsh language sin), Electronic Avant Garde or just mainstream clubbing or DJ’ing in some dive, vegetating, re-inventing and having fun in Oriel Parhad, my funky little gallery in upper Bangor.

After the closing of Wigan Casino and petering out of the scene in the 1980’s I began to get into music production, moved to London, worked in Jobete music (Motown’s UK publishing house) shopped in Sue Clowes shop in the Kings Road and did Boy George’s head in some afternoons. My first vinyl record ever was a cover of Silvetti’s ‘’Spring Rain’’ (A Northern Soul classic) released on Icon Records San Francisco in 1988. Over twenty odd years later this early House effort made it onto an amazing Japanese Compilation by Masanori Suzuki, I’ve no idea how but hey I’m cool and ‘paid in full’ for once. Musically I was inspired by Young Marble Giants, Renegade Soundwave and all the fresh Hip Hop starting to come out of New York, I tried to copy it all as ‘’A5’’ from Gwalchmai. Our ‘’Amser Y Mis’’ sampled the breaks from Eloise Laws ‘’Love Factory’’ on Music Merchant, a massive soul record from The Blackpool Mecca Highland Room.

Northern Soul has a sort of camaraderie I’ve seldom seen or experienced, you can just get pissed off with life, get on a train, find a doo and get hammered dance away ya stress knowing nothing dodgy will happen to you, try that in most City Centre Mainstream Clubs! I can be on a boat to Dublin, the worse for wear and somehow hone in on The Gaiety Theater where DJ Mivian and her beehive spin in the Red Room all manner of mod and Rare Soul into the wee hours. Or maybe I’m in Highbury & Islington at some basement dive where Who fans, Go-Go dancers and 100 Club regulars wear down the floor boards as Asian wide boys do their deals. It’s not planned and few know me as Johnny R.

I ended up a ‘Detroit Record Collector’ mainly due to being on the dole and skint, you could get loads of Golden World, Ric Tic, label 45’s for a few quid and over time I tried to label fill finding obscure Michigan Garage bands also shared these tiny labels and producers and were just as rare as the soul releases. Later in life if you have a few quid you think ‘’I’ll get that Yvonne Vernee record now, it’s book-priced at £2grand.. but you won’t find a copy or anyone who’ll sell one. It’s frowned on to sell your ‘sounds’ even if your kids starve, Northern Soul is almost a cult religion, illogical to onlookers.

One thing that does hack me of about ‘the scene’ is it’s VERY polite to the degree of annoying. There are rules and regulations, a dress code almost, something as a ‘creative’ person that can be very stifeling, I suffer from it myself as when in a recent Bangor alldayer I hurled abuse at DJ Gerald Hogan for playing, what to me, was close to a Happy Hardcore effort not Northern Soul by any stretch of the imagination. He was trying to push the envelope maybe one spin too far.

A good sway of ya Northern soul fans still turn up to events with holdalls covered in Anniversary Patches, a few changes of clothes and the die-hards still dust off their ‘Oxford Bags’ (See this Blog’s picture!) To an onlooker it’s bordering on kitsch, like Rockabillies or Mohican toting Punks etc.

The soul scene does attract a younger element, mainly clusters of girls trying out retro moves for an Embassy or Peep ‘60’s and 70’s’ themed night. Soulies for the main seem now in 40’s – 60’s and if not dead through caning it far too much, are still very agile on the dance floors and know their sounds and ‘kept the faith’.

Mild mannered docile guys from back in the day come to life on the dance floor and recently I was grabbed and the bloke ranted ‘’Remember this one upstairs in Stafford?’’ (I’ve crap memory retention and mumbled ‘’Yeah of course’’ I’d no clue really, records go that deep to hardcore Northern Soulies.

Drugs were once a big part of the scene, obviously to dance six or eight hours straight you’re gonna do more than caffeine but mostly it’s self-regulated and ‘gear’ was pep pills/amphetamine, if you were into smack you stood out and mainly were avoided. These days kids neck all manner of nasties along with cheap alcohol and get wasted for wasteds’ sake, drugs on the northern scene had a purpose.

My ‘northern soul memories’ are some of the best in my life and some of the worst. Some of the best include the train trips up from Bangor to Wigan. The Wrexham lads in crombies getting on with a cassette robbed from Boots that afternoon, it churning up tapes and lobbing it out of the train window! ‘’That’s worth a fortune I said’’ ‘’Rob another one next week’’ came the reply, quite impressive when you’re a teenager! The Wrexham lads got on in Chester were older and very hard, they sort of watched over the younger ones in Wigan, it seemed that way cos there was never any agro unless it was a drug related rip-off.

One of my worst memories though was hiding in Wigan Multi Story Car Park crawled up in a ball unable to face any human beings, caned it way too much, then having a decent conversation with a cat with a full length leather over my head, a holdall full of records and a change of clothing, nice (NOT)

My mates dragged me off in the morning to the station asking if I’d had a good night ‘’Yeah, great, the cat knows the score’’ I replied over and over, then hours of silence on the trip back to Bangor, not a good sight me cracking up.

North Wales pretty much had its own corner of Wigan Casino, there were that many went.

It’s not fair to name names in blogs on Northern Soul you have to respect that, it’s easy to piss people off, pop bands can take that but soulies just enjoy their scene and are not that bothered about being exposed, unless your Ricky Murphy from Bangor who still throws his shirt off and spins flat out in-between ‘borrowing’ peoples pints J and trying to out dance the whole club! Northern Soul in Wales still is mainly word of mouth, but you can worm out the venues on Facebook and the web should you be curious. The scene suffered a grim over-commercialization of Wigans Ovation, Wigans Chosen Few etc. in the late 1970’s on Top Of The Pops and few really want to talk about the crass pop dirge played or taylor made records for the scene then. Any Northern Soul Club these days plays a varied scholastic selection of rare discs, most can be found on CD now including unissued material, but mainly the purists still buy 45’s at quite expensive prices. It’s not so much for the snob value but how the scene is, supply and demand dictate if there are only a few hundred original records made they get bootlegged/re-issued and the originals price rockets, finding discs from 1966 is obviously very hard in 2012.

Everyone has a Top Ten of Northern Soul Records, mine changes weekly but here it is when I wrote this blog, I can DJ out with these occasionally, no CD’s no MP3’s just the original wax 45’s only!

4 Joe Mathews ‘’Ain’t Nothing You Can Do’’ Kool Kat

6 Isley Brothers ‘’Why When Love Is Gone’’ Tamla