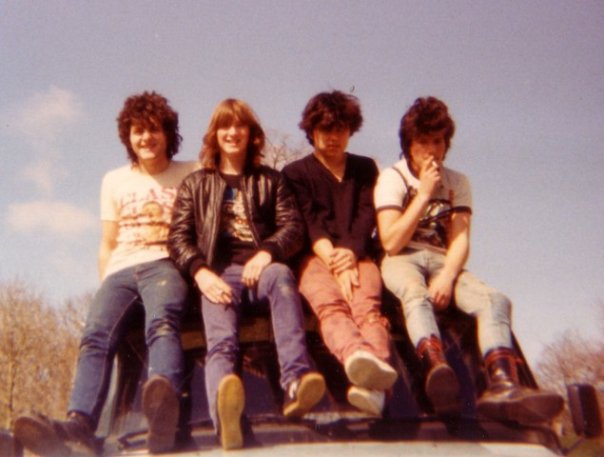 Holyhead based thrash band (mid80s), feat; Spike T Smith (voc,drms), Simon Lewis (gtr,voc), Burton (bass,voc), whose only 7″ release was No Turnin’ Back on the underground Looney Tunes label was widely distributed but seldom bought. Became Destroy Babylon after getting banned from most venues. 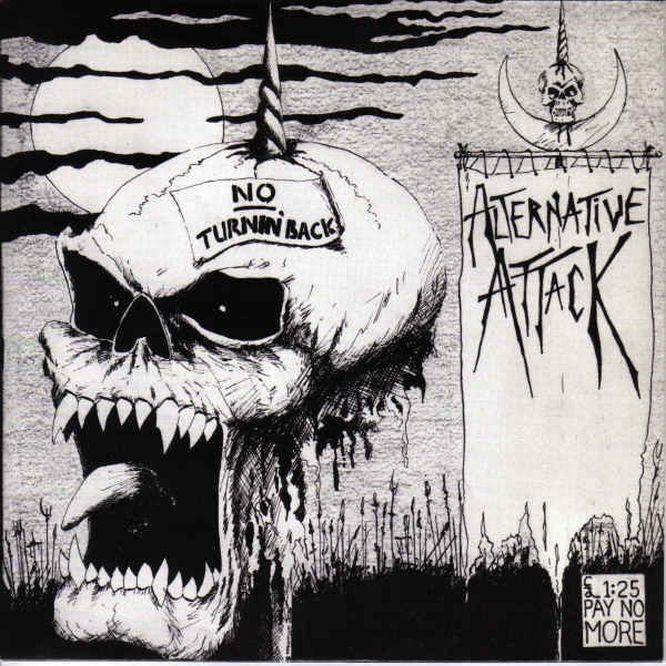 (taken from This Patch of Land) – Their singing drummer Spike T Smith had a stint with hardcore punk (almost metal) midlanders The English Dogs in the mid-eighties touring the UK. No doubt his connections earned Alternative Attack the deal with Looney Tunes Records to release the single No Turnin’ Back in 1986 (hear track on YouTube below), it was a sound that was typical of the time, and probably now, by their own admission, sounded uncannily like their contempories GBH. Despite being connected to an anarcho scene, guitarist Simon Lewis didn’t own up to being an anarchist, ‘I had some Crass albums if that counts! But really I think I only got what Crass were about much later on. I mean I had an Anarchy badge and I was a member of CND as my dad used to take me to meetings! I didn’t eat meat at the time and I don’t now, but really I was just going through the throes of a rebellious teenager, my rights of passage that sort of thing; as a band though I don’t think so. We were into it for the music more than anything, it was about the time, in the world of punk, when it became cool to be able to play your instruments, everything was depressingly moving into the realms of heavy metal.’

Simon explains how he joined Alternative Attack, ‘I thought we were legends! We started in 1985, it was Spike’s band I was friends with their singer and they had nowhere to practice, I lived in an old farmhouse in the middle of nowhere so I said they could practice there. I don’t remember how but I ended up singing. They got a gig with Varukers and I left the day before cos I crapped myself! Some time after, the guitarist Waki got sent to prison for receiving stolen goods I think and Spike asked me if I wanted to play guitar and sing.’

Gigs for Alternative Attack were aplenty, although, as with most punk bands of the time, money was hard to come by but there was lots of fun, ‘We played in Carlisle with Broken Bones and got a parking ticket, we weren’t getting paid for the gigs, we were all on the dole, and it was like crap, there goes next weeks Giro. Spike was always slagging off Burton to me and Burton was always slagging off Spike to me, [laughs] I have lots of fond memories of that time, I was a teenager growing up.’ 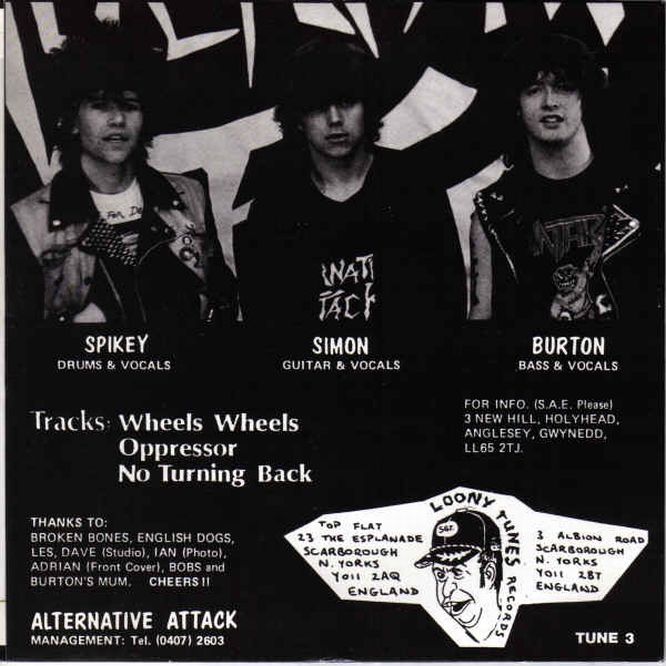 The band also managed to get banned from enough venues due to the bassist, Burton stealing stuff and causing fights to warrant a change of name. Enter Destroy Babylon; taking their name from a Bad Brains song on the ‘Rock For Light’ LP, they also took their songs from Bad Brains (who were a unique New York Rastafarian punk band), playing mainly covers as Spike and his companions figured no one would know, as Bad Brains were pretty unheard of in those days, especially in North Wales.

Things didn’t last much longer than that, ‘I don’t remember why it ended,’ said a hard to recall Simon. ‘I went to Africa for a bit and when I got back Spike was playing for Sacrilege, I think. It’s a long time ago, I forget. I seem to recall me and Spike were supposed to join Wardance with Gizz from English Dogs. I do remember though that Spike was the enthusiast, he arranged all the gigs, studio, everything really. I was never really into it, I loved jamming with Spike in my Dad’s old farmhouse, writing and arranging stuff but gigs just made me feel sick, literally, I recall throwing up once in the toilets of a McDonalds in Hereford pre gig, could have been the McDonalds mind!’