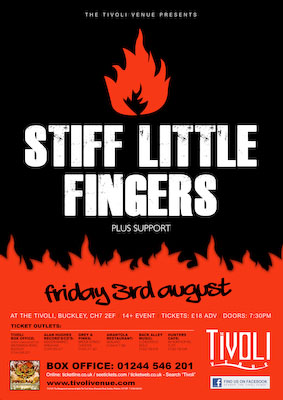 Jake Burns formed Stiff Little Fingers In 1977 after seeing the Clash play in his hometown Belfast. (The band’s name was taken from a 1977 Vibrators lyric “If it wasn’t for your stiff little fingers nobody would know you were dead”…) Gordon Ogilvie, a local journalist, caught their live show and was impressed. He encouraged them to write their own songs about what they knew best–life in Belfast. Jake came back twelve days later with “Suspect Device” and “Wasted Life”. In November of ’77, with Ogilvie’s help, they released those two songs on their own Rigid Digits label, with an initial pressing of only 350. Ogilvie sent a copy to BBC Radio One DJ John Peel, who started playing it every night. The interest generated resulted in a distribution deal through Rough Trade in England.These were the first of what became SLF’s signature style: lyrics that meld the personal and political, music that combines the energy of punk with infectious hooks, and delivery that rings of honesty and commitment.The band released the classic Suspect Device and Alternative Ulster singles in 1978. A local fanzine named Alternative Ulster asked the band to write a song specially for a giveaway flexi-disc. Although the plans for the flexi fell through, “Alternative Ulster” became the first single released by Rough Trade in October of ’78. Jake once introduced it as “a song about having nothing to do.” It became a punk rock classic. In 1979 they became the first band ever to hit the UK top 20 album charts on an independent label – with their debut Inflammable Material.
Holy Coves release debut album Month of Metal in Holyhead