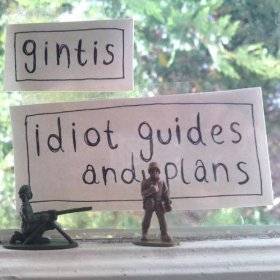 (review by Folly of Youth)

“Idiot Guides and Plans” is the much-delayed second album from Gintis, a five piece band originally from Abergele in North Wales. An unassuming description like this doesn’t prepare you for just how special this album is or how moving its ten songs of downcast beauty and flawed humanity are. If Gintis don’t wear their nationality on their sleeves as much as other compatriots, they certainly put on open display the pained frustrations of small-town lives and thwarted ambitions.
All my initial listens to this album were in alphabetical rather than running order. So I’m going to need several more listens to correct my mistaken impression that ‘The Bakery Song’ is the fourth and not the opening song but let’s start there as it is a good example of the Gintis modus operandi.

It is a modest and on the face of it quite simple song which may send you in the direction of Gorky’s Zygotic Monkey at their softest and most filled with child-like wonder. But rather than gently psychedelic and pastoral, this song is a tale of humble domesticity gone awry. The loving detail of baking bread is celebrated before our protagonist is made redundant from the bakery by the newly opened supermarket, where to keep a roof above his family’s head he has to “swallow my pride / and work the rest of my life for a man I despise”. The songs finishes with swaying bah-bah-bah harmonies, lush steel guitar and gentle lilting organ underpinning a hope that “things might turn out better / if I could be a better man”. Simple living turns to drudgery at the hands of nameless corporations and the faint glow of optimism is bedevilled by human failing. All in 3 minutes 19 seconds. Not so modest then.

These chronicles of life at the bottom-of-the-heap are littered with seemingly mundane and domestic details: overdrafts, toothpaste, landlords, fairground waltzers, a Twister from the ice-cream van – but Gintis also pose big questions about the big themes in life, deterioration and death, faith and freedom, in the simplest of phrases. And despite entrapment by routine, fate or human failing, these muted and subtly orchestrated melodies are shot through with moments of transcendental beauty, ambition and even hope. Gintis also display a childish pettiness (the self-explantory ‘Your Brother’s A Prick’) or plain silliness (the shooby-doo celebration of ‘The Overdraft Song’) which only endears their very human flaws to me more.

‘Half As Much’, the true album opener, is a song about the interactions between technology and people much as Grandaddy sang about on “The Sophtware Slump”. It is a sparse, strummed lament to fax operators and data-input clerks made obsolescent by machinery. In capturing that moment were something is lost, it is touchingly nostalgic without being sentimental. As it progresses it becomes apparent the song is actually about a loss of communication and breakdown in a relationship (“running around trying to please the people / none of who love you half as much as I do”). Its quiet clenched-teeth determination is the closest Gintis come to rage at their lot. ‘I Think We’re Free’ encompasses scientific rationalism and existential doubt in a breezy three minute ditty that helps us hear an alternative version of what Euros Childs and Teenage Fanclub collaborating could sound like if the Jonny record didn’t exist.

The finale to the album is ‘Now I Know’. Remember how Stephen Malkmus in ‘Range Life’ unites slacker skate-boy cool with being in a band and makes it sound the best thing ever? Well ‘Now I Know’ trumps that. A near nine-minute anthem of band-mate solidarity and plea for unity sung over plaintive banjo, simmering organ and muted trumpet that swells to a rousing, self-affirming group chorus. If other songs leave you wanting to put a consolatory arm round Gintis’s crumpled shoulders, this song makes you want to link arms and join the head-held-high chant “one day / I hope / that everyone / can smile about it“.

The biography written by Carl from Gintis lists some of the bands’ ups and downs since recording first album “Happy Drunken Accidents” in 2006: “sadly an unfortunate amount of family circumstances, distance between band members, abject poverty, depression and even short periods of homelessness delayed completion of this album for 3 to 4 years”. Unhappy Sobering Mishaps? It gets worse: “It cost barely a penny to make this record, using borrowed instruments and relying heavily on the generosity of others (which is good, because the band have and continue to have nothing)”. The underachievers have tried harder and succeeded – I’m just not sure they know it yet. All credit to Fresh Hair Records for helping get this album released (on 11 April) but Gintis don’t need a sympathy vote, they need an immediate place in your record collection. Go and show them some love and cherish this record. Contender for album of the year?