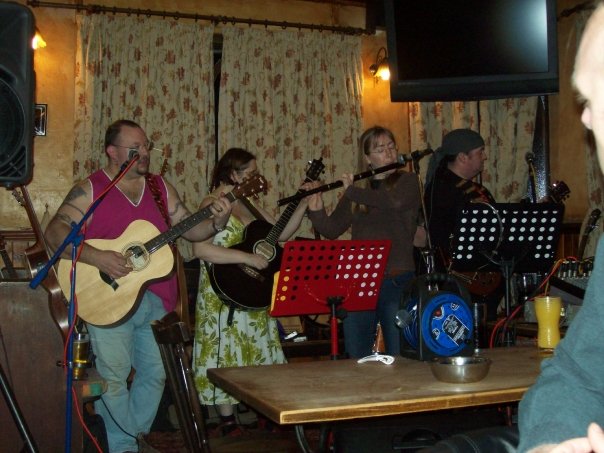 So..it appears as though Thursday has now become the new [insert day of the week which one remembers as being pretty decent].
This was certainly the case in Bangor of (all places) last night where there was, for the first time in a while, a lovely selection of live music on offer. The night kicked off with a gig at the Tap n Spile featuring Sona’s very own Kyle Lee doing a solo set in support of local music lynchpin James Phillips’ horribly-named band the Bum Sting Spiders.

Due to a bout of insomnia the night before, I awoke too late from my post-work slumber to get down in time for this one, instead just managing to get down to the Ship Launch where I’d agreed to play a couple of songs at an acoustic gig/ open mic night. On arrival, I was pleasantly surprised and taken aback by just how busy it was. Lhotse Whittle is the organiser; a ‘new kid on the block’ when it comes to the local scene but she’s doing a bloody good job of it and seemingly has something to do with every gig in the area at the moment (see Rascals gigs, Ship Launch rock nights, Boatyard acoustic nights etc.) Being a music man myself, you can’t emphasise enough the importance of people like Lhotse, and she may in time become Bangor’s answer to Rhyl’s Steve Rastin…

And so to the night itself. The atmosphere creates itself in this tiny little pub backroom and the dim lighting and crowded feeling only adds to the intensity of Stacey Cohen, who I’m lucky enough to catch as I arrive. Beautifully crafted songs with expert finger-picked guitar work consisting of mainly originals and one cover at the end. From a critical perspective, maybe too much talk about ‘yoga’ in between songs (!) but some really nice melodies and a confidence in her own vocals make for a great start to the evening.

The set up at the Ship Launch nights is that three performers are pre-booked for a 30-45 minute slot and the rest of the time is filled up with open mic. Which is where Ventriloquism for Dummies step in. This 80’s pop rock two piece plough through a couple of originals but something is seriously wrong with the tuning between the guitar and the bass. They redeem themselves with their third and final song when the bassist picks up a guitar instead and the pair deliver a fine performance of Tom Waits‘ Rain Dogs.

I then took the stage and plucked through a solo song ‘After Hours’ and a cover of the Pixies‘ Here Comes Your Man.

Back to the other side of the fence and it’s time for the second invited guest of the evening, Paul De Marco of local rockers Gumshaw. He puts in a lively shift with a mix of covers and originals, his strong vocals and heavily strummed guitar getting the crowd nodding their heads and tapping their feet to his beat.

Unfortunately, the main course of my evening is calling and so I leave the Ship Launch and hot foot into the middle of town to catch the phenomenal Kev Fox at Blue Sky. The vibe here is completely different, with arty pictures donning the walls and border-line pretentious audience members sipping red wine. Nevertheless, I get what I came for as Kev Fox & Co start building their first crescendo as I arrive.

Every now and then you watch a gig which inspires you and makes you want to pick up a guitar there and then and write a song; this was one of those gigs. Each song magnificently and delicately crafted, then beamed into the room by Kev’s superb guitar playing, some amazing drumming from Zoot Warren, fine bass work from Mark Chancer and powerful female backing from Charli Lamont. Each piece of the jigsaw is perfectly rounded and fits snugly into place, the drumming perfectly complimenting the bass complimenting the guitar complitmenting Kev and Charli’s vocals.

You can’t help but feel spoilt as each song gifts you hook after hook, like an endless stream of musical treats- you’re savouring one before they take you onto the next, slowly building tempo until the almighty crescendo is reached; then back down to a single, finger-picked guitar. The changes are breath-taking and despite often following the same pattern, each song is as inspiring as its predecessor with some interesting use of delay pedals, looping guitar and reverb. It feels as though the superb Zoot Warren (drums) is being rewarded for merely tapping toms and caressing cymbals in the verses, before the songs build and they let him off his lead to run amok through the choruses. The fills are great, the interchanging use of brushes and sticks is great but most importantly, he fits seamlessly into each song. Truly fine musicianship plus amazing songwriting is a great recipe for a live show and this one doesn’t disappoint. One of the best performances I’ve ever seen; it even inspired me to write my first review.