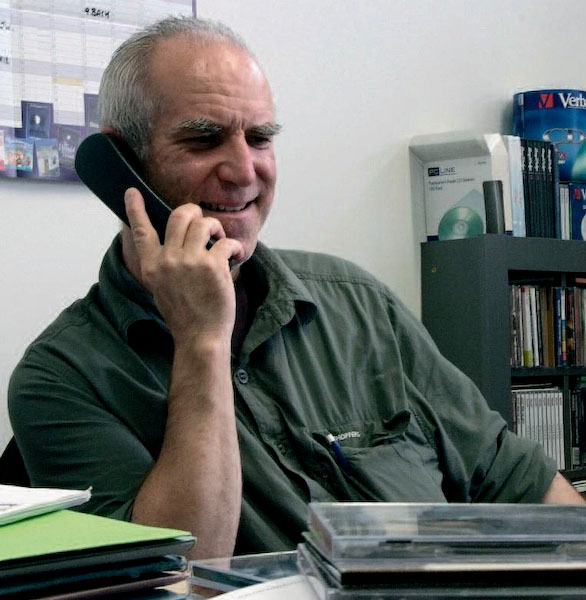 “Are you feeling peckish?” asks Rhys Mwyn. “I could just do with something to eat…”
Galeri, Caernarfon, is a wonderful building, a complex of performance art, cinema and office space for go-ahead companies; fortunately for Rhys there’s a café and bar just downstairs. We detour to a table, order drinks and Rhys decides upon a huge plateful of grilled tortilla chips littered with cheese and peppers.Whilst munching these he delivers Mwyn philosophy.
“I want everything to be almost bespoke. I mean, variety is the essence but what we do should be cool…”

He pauses mid-sentence. “Yeah…that’s it; they should be cool, whether they stand alone or are seen as part of a series.”
You may wonder what the hell we’re talking about. Could it be pieces of art? Could it be novels? Well, it could be, but it isn’t either. Rhys Mwyn is, you see, a key player in Welshmusic; without him so much could never have happened. Maybe time for a bit of history…pay attention at the back!
Rhys was once a punk, a serious punk, part of a band that trail blazed the way for others to follow and promptly cleared the decks of any lingering or lazy bands hanging around from the first wave of Welsh rock in the early 70s. That band was Anhrefn. Both Rhys and his brother Sion ensured that releases made a point as well as entertained.
“We had a political side,” he reflects. They had a worthy cause: to push Welsh-language
punk as far as they could into an English dominated art form.
“I like to hear rock – of whatever variety – sung in native tongue; there is no earthly reason why somebody born in Wales – or somewhere in Europe – should want to sing in an American way!”
Anhrefn worked like Trojans. They toured constantly and won the heart of the late John Peel with their no-frills, no-nonsense approach. They recorded several sessions for Peel, including a legendary set featuring actress Margi Clarke, on a Welsh version of ‘For Once In My Life’. The lads also became the first Welsh-language act to sign to a major label, though they did also work with domestic company Sain for whom they produced their best-known track, ‘Rhedeg I Paris’.
“You learned fairly quickly that rock’n’roll isn’t a glamorous life in the slightest. I’m immensely proud of what Anhrefn achieved but I still remember the driving, the long nights, the dives and the sheer slog of keeping our heads above water.”

Learning the ropes fairly swiftly and retaining their ambition to help Welsh language rock artists, Rhys decided to form Anhrefn Records, which between 1982 and 1988 issued product that gave a start to hometurf acts such as Cyrff, Datblygu, Llwybr Llaethog and Fflaps. Impressed by the set up at Sain and by the fact that the head of the label was already a nationalist and radical – Dafydd Iwan, Rhys became a scout for their new Crai offshoot and, significantly, happened upon no less than Catatonia.
“Of course, I worked with other groups as well but as Anhrefn – the band – wound down, I began to unofficially carry out management duties for Catatonia.”
In truth he was also plotting his next musical move and that involved his getting back to recording and performing with brother Sion. This time, however, there would bemore of an umbrella organisation than a fixed band. Hen Wlad Fy Mamau – translating as ‘Land Of My Mothers’ (pic below) – was a brilliant project, with visuals and graphics sourced from Sex Pistols designer Jamie Reid, a sound that married harps, fiddles and traditional vocals with punk muscle, reggae, Eastern percussion, techno beats, samples and spoken passages. 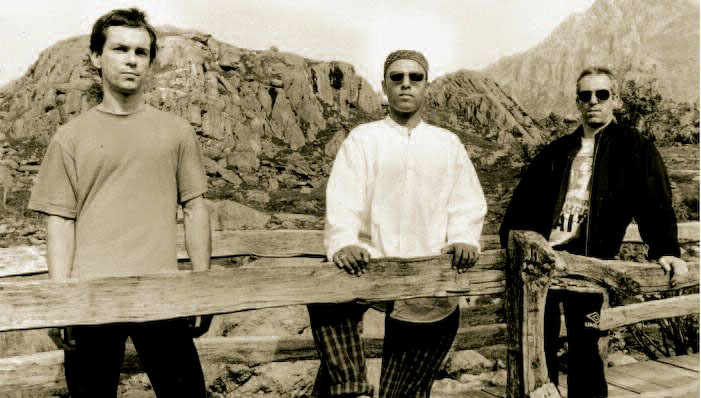 Using the cream of Welsh musicians aswell as actors like Philip Madoc, the resulting sessions detailed history, lore, protest and contemporary frustrations in one spellbinding release. A decade on, Hen Wlad Fy Mamau still stands proudly as a defining moment in Welsh music. “We signed to Richard Branson’s V2 label and worked on a couple of twelve-inch remixes, but they [the label] were too corporate to meet with our attitude and vision. There was no meeting of minds.” Rhys raises his eyebrows in mock surprise. As if he’d ever be comfortable in such company.
Rockmusic journalist Mick Middles, sometime contributor to these pages, once described Mwyn as a benign rebel and I can’t think of a better description. Rhys Mwyn is very much his own man, a one-off who likes to do things his way. In doing that, he happens to have been quite successful – probably not in any real monetary sense but certainly in an artistic way. For a while, he stayed with Crai, masterminding the acquisition of Big Leaves and Anweledig, proving that his keen ear for contemporary talent was still finely attuned and he also found himself further immersed in management, once Land Of My Mothers called it a day.
Increasing diversification took his talents into promotion of bands and live events. Two awards for contributions to Welsh music early in the new century seemed to point the way for this maverick. “I decided I should do for myself what I’d always done for others; it was as simple as that, really.”
So was born Rhys Mwyn Ltd, currently housed in Galeri and run from an office that, compared to most rock’n’roll headquarters, is organised and purposeful. From here Rhys is the overlord for a diverse management portfolio of artists, booking gigs across North Wales, running a promotional agency and resurrecting the Anhrefn label, for what he terms ‘boutique items’.
“When I was younger it was cool to have all the Stiff releases; you could follow individual bands or pick up everything the label did…you were guaranteed a certain quality and kudos just by the company name on the label. I’d like them [Anhrefn releases] to have the same kind of reputation that came with the works of Adrian Sherwood or someone similar.
“The people I work with have got to have spirit; they’ve got to put in as much as I do and if I believe in something then I’m totally behind it.”
Currently under his watchful gaze are the talents of transplanted acoustic troubadour Jeb Loy Nichols; bass-and-drums duo Warrior Charge; Pontypridd singer-songwriter Amy Wadge and new kids on the block – electro-folk revisionists 9 Bach.
The thoughts of Chairman Mwyn on his charges?
“Jeb Loy Nichols finally arrived in mid-Wales via New York and London and via On-U-Sounds, Pressure Sounds, Fellow Travellers, Capitol Records…he’s a restless character who just happens to have landed in mid-Wales. Once here our paths were sure to cross, in his case via the art scene: he’s an artist as well as a musician. Jeb’s wife met a DJ’s wife who recommended me as a potential manager.” Nichols’s ‘Days Are Mighty’, an album of quiet, personal country-soul, reactivated the Anhrefn label after a break of some seventeen years.
“Former African Headcharge members Wayne Nunes and Perry Melius are now known as Warrior Charge and they play experimental reggae with dub, garage and jazz beats as well as operating as session musicians and producers. They’ve worked with Tricky, Eek A Mouse, Aswad – in fact they named themselves after an Aswad track. Wayne has played on Jeb’s records and produced some of them so, again, the inevitable happened …we got working together.”
You can’t say there’s anything predictable about this stable of artists. ”Amy Wadge I’ve known for years. She’s an excellent songwriter, who should be up there with all those artists they steam roller through – Duffy, Amy Winehouse…she’s better than them all. Anyway, we have a mutual friend in ex-Catatonia drummer Aled Richards. Over the years we’ve worked on many projects together so, again, it was a natural progression to end up managing Amy. She asked me to think outside the box. I liked that since it’s what I do anyway.” 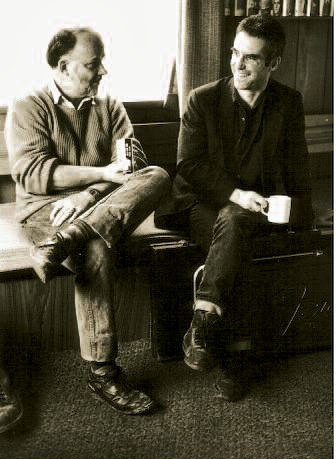 And the most recent addition to the family: nu-roots exponents 9 Bach, whose latest single is simply stunning.
“I like them. I think their attitude and approach is just what’s needed. They’ve spirit and a kick-ass mentality. It is folk music, I suppose, but they take the old Welsh material and move it somewhere else. One morning they just turned up at the door here, asking me to consider taking them on board, which I was happy to do since they have so much scope and promise.”
Conversation turns to the reactivation of Anhrefn Records and in particular Marching Songs Of The Free Wales Army, by the distinctive individual who was Cayo Evans. Rhys smiles broadly at the mention of the name. “I remember hearing about his exploits when I was at high school. He was a liberal and activist in the Free Wales Army during the late 60s. It was an organisation that relied more on hype and publicity than any direct action, but Cayo as co-founder and self-styled Commandant wore a uniform and was arrested at the investiture of the Prince of Wales in 1969. He was sentenced and served a short period in jail.”
Marching Songs is a mixture of reminiscence, propaganda, determination, Cayo’s rudimentary accordion playing and gutsy songs. So, besides being a tribute to a boyhood hero, why did Anhrefn decide to issue the album?
“I wanted to put the record out. It should be released; it’s part of Welsh cultural history. It’s a document as much as a musical statement. I don’t expect it to sell as much as our other releases but Cayo was a character and he deserves to have his memory and ideologies preserved.”
Has Rhys Mwyn ever considered that he may be a character himself? He laughs. “Well, there is my book…” There is, too; as yet only in Welsh but full of fascinating stories and stimulating opinion for the Welsh speakers amongst you