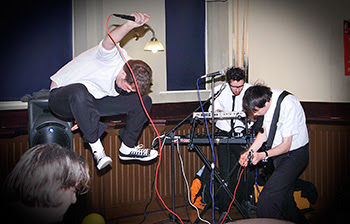 Self depreciating and modestly humble are not qualities you normally associate with a band. Being in a band has a lot to do with ego and once you get talking to the very approachable Portrait of A Lifetime you’d be led to believe they regard themselves as nothing too special.
‘We’re just a cabaret band.’ States frontman Jamie Burne.

The definition of cabaret is ‘a floor show of dancing, singing etc. at a nightclub or restaurant.’

Jamie’s description stems from the fact the band consists of a heavily pre-programmed keyboard set up controlled by DJ Nietzsche, Jamie on manic vocals and his brother, Stuart on guitar. No drummer – the drums are also pre-programmed, ‘Drummers are far too unreliable man.’
I’m told in a thick Holyhead accent.

That’s as far as the cabaret goes. This isn’t even a performance; it’s an assault on the senses that leaves you senseless. And even from the relative safe distance in the corner of the venue my ears are still ringing out after being bashed by the heaviest break beats ever slammed down on the North Wales coast. Heavy enough for the Isle of Man to suffer a tsunami warning late last night.

This was strictly a family affair – not only are PoAL closely related – everyone from Anglesey is closely related! But they were here by private invitation to help celebrate the coming of age of my nephew Danny Crud. So it was a performance exclusively for the Crud family! You should’ve seen the faces of some of the older fraternity!!! It was a sight to behold! Although one young detractor was kid brother Isaac who suggested he’d rather shag Elton John than see PoAL again! And yet Marni Crud (5 years Isaac’s junior) found them, ‘Uplifting, but I understand what their big deal was; why were they so angry?’

The aggressive energy serves as a canvas to display observations of modern day deceit, paranoia and confusion of the social mindframe we are stuck in. The lyrics are of course delivered with ferocity and totally lost on the cabaret dancefloor as Jamie sprang from one side of the room to the other.

The band’s roots seem to be steeped in the dearthly depths of Anglesey’s metal scene, and our earlier sedate discussions revealed their fondness for such bands as Entity, Kobe, Skinflick, Gape and My Dad’s Mullet (what a great name for a band!).

The set ended with some insane number that had been smashed on the ground and sounded like a toddler had stuck it back together before the sound of Chesney Hawkes’ ‘I Am The One and Only’ finished the live show – that’s cabaret for you!

Butter wouldn’t melt in their mouths!

Portrait of A Lifetime are fucking brilliant 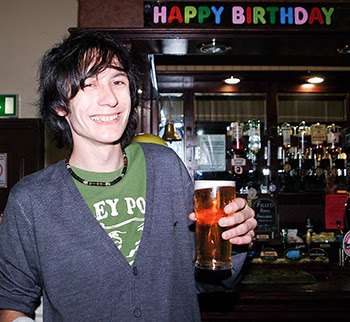