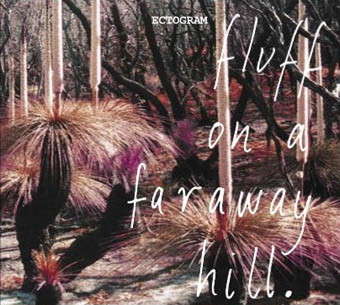 Recorded at Faust Studio, Scheer in southern Germany during June 2006. Produced by Hans Joachim Irmler, this is the first Ectogram release to not be self-produced.

This sixth album is another firm step forward for Ectogram. While still firmly rooted in the Krautrock and post-punk spirit that is their hallmark, they keep pushing their albums into new places, challenging themselves and creating a treat for us in the process. It is easy to get lost in this album for hours; the eight songs that make up this album are meticulous in terms of sonic texture and each listening experience is full of new surprises. Not only that but Fluff on a Faraway Hill is fun too.

It is obvious right from the start that this time Ectogram are having more fun than they did on their last album, Electric Deckchair, which was great but hard work to listen to. The eight songs on Fluff are less obtuse: the band sound like they are actually enjoying themselves. The opener “Brink of Water” is like audio candy floss: a shimmering guitar bubbles over a solid rhythm while Ann Matthews’ unique voice emerges from the center of the song like smoke through gauze. It is a fantastic start to an album and sets the standard high from the beginning. The next track out-does the first: “Devisor” is based around a spellbinding Ebow riff which drives the song. Again Matthews’ vocals float like a ghost into the mix, her performance on this album is wonderful.

The middle of the album sees Ectogram slowing things down, allowing the sounds of their instruments to have more space. The effects are used appropriately, normally such heavy use of phaser (or whatever swooshing effect they’re employing) gets irritating very quickly but Matthews and Alan Holmes both tastefully color the guitar sound instead of overpowering it. The album picks up the pace towards the end and finishes off with “Strategy Three” which has one of the cheeriest guitar melodies I have heard since I last listened to the Beach Boys.

I seem to be unable to get sick of Fluff on a Faraway Hill which is no mean feat. Overall, the album is dense enough to make multiple listens rewarding but not so dense as to make it a chore to wade through. Ectogram have outdone themselves this time and I hope they continue to outdo themselves in the future.