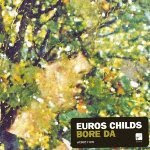 Nothing has me reaching for my geiriadur mawr quite like a new Euros Childs record. His latest offering Bore Da is sung entirely in Welsh. Not that this should be a hindrance to anglophones as Childs’ strength as a songwriter has always been his wonderful gift for melody.
The word “jaunty” doesn’t really do justice to opening track Bore Da (Good Morning). It’s the kind of life affirming song that everyone should wake up to. Of course it goes all haunting and melancholy at the end just to confound you but that’s Euros Childs in a nutshell.
Diabetics everywhere will be delighted by Siwgr Siwgr Siwgr (Sugar Sugar Sugar), a foot stomping rock’n’roll number that’s better than a double dose of insulin.  In Henry a Matilda Supermarketsuper Childs pokes fun at the domestic as well as having a go at supermarkets.
Anyone who has seen him live over the last year will know that this song has become something of a favourite with fans.  Ar Lan Y Mor (By the Seaside) is a short ditty that will transport you straight back to your infancy. All songs sounded like this when you were 2-years-old.
Childs is at his melancholic best with Twll Yn Y Awyr (Hole in the Sky) and the beautiful Dechrau’r Diwedd (The Start of the End). Is there anybody out there who can pen a lament as expertly as this man? I think not.
The mood is lightened somewhat by Cwtch, a raucous slice of rock’n’roll that will have you shamelessly bouncing about your bedroom. And in case you were wondering Childs is extolling the virtues of having a nice cuddle.  Blaidd Tu Fas Y Drws (Wolf Outside the Door) is a dark, edgy little number with more than a whiff of the folk tale about it. Childs ups the weirdness ante still further with Warrior. As this song proceeds his manic vocal becomes increasingly disturbed until by the end he is screaming like a loon. Let’s be honest we’d feel short changed if this didn’t happen at least once on a Euros Childs record.
The concluding three tracks are a return to the pastoral. Foot fetishists will swoon at Sandalau (Sandals) – essentially a hymn to summertime. Roedd Hi’n Nofio Yn Y Bore Bach (She was Swimming in the Early Morning) is a beautiful celtic lament. And like a perfect sunset the CD ends with Aur Y Haul (Gold the Sun).
Once again Euros Childs has confirmed his status as the Crown Prince of Lovely Melodies and provided us with an ideal soundtrack for the coming of Spring. Bore da, released by Wichita, is on sale now.