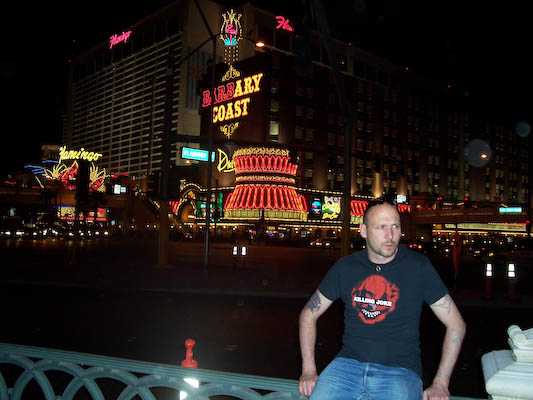 ‘I’d rather go hungry than eat that shit.’
Came an American drawl as he walked passed Burger King in Las Vegas International Airport. Maybe some attitudes are changing in the US of A but that lone voice doesn’t speak for the 209 million people whose diet makes them walking miracles.

Having spent a week in the excess capitol of the world I’ve managed to put back on the stone I had lost, and that was with walking about 20 miles a day! Salad? What’s a salad? It’s actually that blood soaked green stuff you have on the side of your steak that the waitress wipes into the bin after your meal.

It took a good couple of days to adjust to the time difference, although having not slept properly for over a month I thought the 8 hours behind would not have mattered; but it did. More so to Steve Sync who not only suffered from jet lag, but also jet arse (sorry, ass!) and his daily quest to have a proper dump bore little fruit and the three huge meals a day piled up and up within him. It was Thursday’s intake of 911 Hot Wings at Hooters that did the laxing trick for him and he never looked back after that. The 911 wings (named so after the emergency services number in the States) is probably the hottest thing you’ll find to eat in Las Vegas (after the Hooters girls) as the Americans don’t seem to have spice on their menu. A visit to a mexican restaurant confirmed this when I requested my chicken fatijas nice ‘n’spicy,

I didn’t get it though. No, the Americans, or the Las Vegans at least like it with meat, rich and sweet (and weak lager), and that’s how it is. The steak is superb because the cows are well fed, but you can’t have it for breakfast, lunch and dinner unless you’re a body builder. Pancakes with maple syrup are a priority and even the world’s worst hangover couldn’t stop you drenching that syrup over the plate.

Myself and Sync needed a holiday, we’ve both been through the mill this year, due to one thing or another, we’ve worked hard, we’ve always played hard, so now was the time play a little harder. There was the option of a week in Spain, but we thought we’d look like two gays on the beach, then we thought of Amsterdam, but we’re filming Gong there for three days in November, then Sync came up with Las Vegas.

If you’re 6’3” (as we are), you should have your legs surgically removed at the knees to accommodate a comfortable 10 hour plane journey. The makers of MyFlight aeroplanes must be blind lesbian dwarfs, MySpace, MyFlight, MyArse! A quick type of ‘Deep Veined Thrombosis’ into Google brings you directly to the flight operator’s website!

Las Vegas – the city that never sleeps, a fortune won and lost on every deal, The Strip, a four mile long High Street paved with gold and lined with the plushest hotels in the world. So how come we end up in a shack! America’s Best Value Inn – mould on the ceiling, crickets on the floor, tiles hanging off the walls. But who cares, we’re in Vegas! 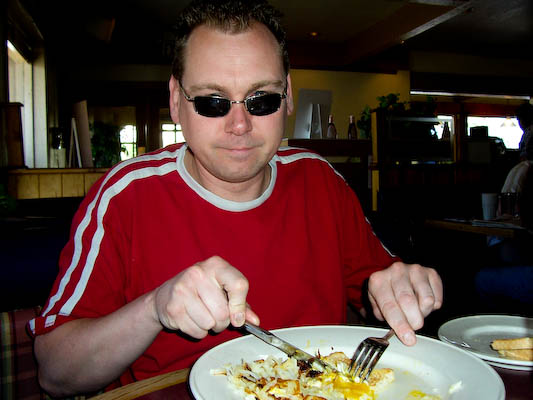 Our first priority was food and we lunched in what would become a regular breakfast stop – Coco’s American Diner, which is EXACTLY like that ‘Any of you pricks move…’ diner on Pulp Fiction – EXACTLY. Uncannily in my back pocket is my wallet with ‘Bad Ass Mother Fucker’ stamped on it! Thankfully the diner wasn’t held up or robbed, although there was a sign in front of the till saying nothing higher than a $20 bill would be accepted during the graveyard shift.

Apparently pure oxygen is pumped through the floorboards of these countless casinos, to keep the gambler awake. There are no clocks – the city doesn’t sleep, although people do drift off at about 4am and things don’t get going until mid morning, but if you want to play roulette at 6am you can. We had a strategy; we were only going to play the tables on our last night, that way we wouldn’t end up skint half way through the week. So Saturday night we played Black Jack, minimum $10 bet. The pre-deal was that anything we won we would split 50/50. I bought $80 of chips and put $40 down on the first table and a couple of hours later walked away with $200. It was definitely beginner’s luck – 5 Black Jacks in one game! That was in the Mandalay Bay Hotel, also home to The House of Blues restaurant and venue, another regular haunt for ourselves. It was a cool bar decorated with bottle tops glued to the red walls in crucifix shapes and skulls painted everywhere. Downstairs was the venue, like a mini-Liverpool Royal Court hosting regular touring bands – this week its was POD, The Spazmastics, Jamie Callum and Ministry, the latter of whom we saw. We also saw Arsenal limp out of the Champions League final at noon on Wednesday at the House of Blues; one of the few places to show soccer. The Americans don’t understand real sport! What’s all this American Football, Baseball and Basketball rubbish!? Every bar in town had one of them on. These hotels are not just hotels, they’re a community, a town, a leisure centre (sorry center) in their own right, and you can spend an entire day out of the blistering 104deg sun outside within the sanitised domains that this city has to offer. You can eat, gamble, drink, shop, swim, visit the zoo, go clubbing, see concerts, go the theatre all under one roof! Incredible!

More when it surfaces…. 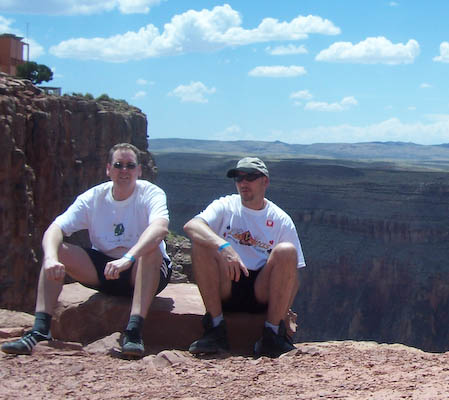