Hello, & at last! The first gig of 2006 after a particularly barren January…… The Loose club @ Howard Gardens, Cardiff is a new one for me. Basically it’s a scruffy little University bar room on the UWIC, Newport road campus in Cardiff. Now, of course, with it being a uni bar the beer prices are….. acceptable, which makes it a fun night! Now, as I said, it’s a scruffy bar room, but this doesn’t detract from the ability of it to be a good gig venue, sometimes these places are the best! The “Shy Magnolias” are playing their last couple of songs as we walk in. Non offensive, enjoyable guitar pop in the main. Didn’t see enough of them to really comment, nothing ground-breaking but, seemed OK to me on first hearing.
The venue filled very quickly & by the time second band Port Talbot’s “The Voices” came on stage it was well full. “The Voices” released their first, self titled album on “My Kung Fu” late last year, of which, has been in my CD player quite regularly since. Can’t quite put my finger on what I like about them, but I do…..Also, they are definitely doing something different than a lot of the bands you see knocking around South Wales at the moment. I saw them described as “shoe starer’s” in a recent review…. Very nice shoe’s they have as well! Back to tonight’s gig. There is nothing much in the shape of on-stage lighting here tonight & “The Voices” obviously knowing this have invested in a £30 sort of psychedelic disco light which provides the only light on stage, they turned everything else off! Which I thought was well cool, meant they played the whole show in darkness, very atmospheric….. Add’s to the effect of “The Voices” sound. A reasonably short set tonight, performed as usual, with their backs to the audience at times, no communication to the crowd either just the sound of those strange “Voices” eating away at the back of your head. An addictive, compulsive, sound with, I think, has so much potential. Catch them soon if you get a chance.

Next up were “The Beatles”! Uhhh, sorry, I mean, “El Goodo” Again, a band who had their first album out on SFA’s “Placid Casual” label late last year. Alongside this the band also got to support SFA on their “Lovekraft” tour. Now, I have reviewed these guys a number of times before & to be honest can’t find anything much more to say about them. I still struggle with the over-use of all things “Beatles”, even same violin bass & vintage guitars…… Never really liked the “Beatles” & suppose It’s the same for “El Goodo” at the moment. It’s a shame as they sometimes start to sound like a sort of “Grandaddy” & sometimes there is an “El Goodo” sound creeping through, unfortunately not enough of themselves in it for me yet. Went down well with tonight’s student crowd, which speaks for itself…… 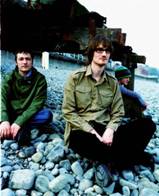 Headlining tonight are “The Keys” Fronted by the excellent, ex “Murray the Hump” front-man “Matthew Evans”. A great fun, country / rock n roll / distortion (odd mix?) band. They weren’t left with very long to play their set tonight & only ended up playing a few songs, which was a shame as I enjoyed what they did. As I mentioned above, a sort of “60’s” country mix, with the theme added to by Mr. Rees “hick” shirt! Their sound is a lot heavier than what you would normally expect from a country style band, even to the point of sounding like the “Ramones” in their mellower moments at times. Overall, a well fronted, fun band, who are an ideal tonic after a tough week at work. Nice one chaps.