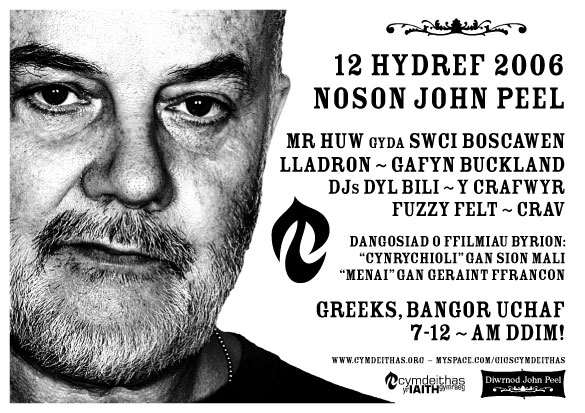 “This is the story of Peely backwards, he’s on the radio nearly every night,
Some people say he’s a balding ex-hippie, me and the guys think he’s pretty alright
Now I don’t suffer fools gladly, and I’ve hardly ever eaten a quiche
But our Peely thinks ‘Pneumatic Geek’ is deeply moving, and he’s strung out on Kenny Dalglish!”

The above punk mentalists were appreciative, as was I listening on my transistor (haha, who calls it that? Never mind trannie, complete misinterpretation potential) through the rubbish black hole of Penmaenmawr static reception, to the guy who provided a nationwide insight into just how eclectic music really is, was, can be.  Especially as most other media might give you a horribly narrow mainstream view, and still does, will always.  So now it is two years since he popped his sandals, seems both long and short time, and here at least is a local acknowledgment of his legacy.  Any excuse for a get together anyway.

Peel was always very supportive of the Welsh music scene and language, and it seems natural that this particular gig is organised by and interwoven with Cwmdeithas yr Iaith., returning the recognition.  The Welsh language society’s chairman and compere for tonight is Steffan Cravos, who in a recent previous life rapped with Tystion and gained much airplay from him.  He’s hot footed it up from his native Cardiff, a bit like I had twice in the last week after putting myself through the wringer of football emotions.  I’m pleased to join up the dots and establish later that I had indeed met him previously, though not known it at the time, at a destroying Alec Empire gig in Newport where he’d given me their “Y Meistri” ep as a first insight into the excellent band.  They are now history but where lies the future of Welsh language and music is another eternal question that’s not to be worried about during this evening’s entertainment

Amongst the varied dj’s mixing stuff up in the relatively unique semi-outdoors venue surroundings the first act introduced is Gafyn Buckland.  A solo guy singing with acoustic guitar could be very limited in scope, and I was already suffering from grindcore cold turkey/pre-pissed non-gregariousness.  However, through a bit of technology it turned out to be a quite intriguing performance, as he triggered delay loops on his vocals to create layers of rhythm and harmony.  This added a whole extra dimension to the use of voice and the sound of language that was quite simply but very effectively done.

A fair bit of technical difficulties precede the showing of a couple of short films on the in-house big screen TV to maintain the variety.  When eventually up and running there was “Menai”, a collage of collected films featuring the bridges and environment soundtracked by Stabmaster Vinyl, then a mini documentary on Tystion’s trip to do a Peel Session in London, including others reminiscing on  the DJ too.  The films had to compete with other users of the venue as a functioning restaurant and meeting place (Greek student society?  Any Cypriots among you? Haaaaaaaaaaaaaaaaa. Your boys took a hell of a beating tonight.  Well, last night.  And it was still a bit dodgy at times, but there’s no easy games etc.  Hence the forthcoming “test” against Liechtenstein), but over the course of the evening the place got busier and busier with a greater and greater proportion here for the event.  This included many local music folks like KAFC, Mank, Genod Droog and also a proportion of Welsh broadcast media recording the event.  I spied their recording running order sheets, all amusingly headlined with a reminder to “keep it clean”, although that may just be my bad welsh translation.

Lladron is an apparently appropriate alias of Dyl Mei, for his theft of familiar tunes and giving them a welsh remix.  Not a lot of live input beyond what a DJ might do anyway but ear-catching anyway.   Crav himself also provides some atmospheric beats mixed from laptop before the next more live input is from KAFC member Mr Huw.  More conventional singer with acoustic and joined on mellow duets with scene darling Swci Boscawen, all very pleasant but not very engaging for me.  I instead am drawn into discussions with DJ Fuzzyfelt on the best ways of stalking alleged North Wales resident Justin Broadrick, do let us know if you spot him.  Not that I’m going to keep him drugged up in an underground room producing industrial noise to my hearts desire or anything.  Not that that is not what he’s probably doing anyway.

Anyway the night closes with a bit more upbeat techno and reasonable satisfaction, given my lack of expectations with the constraints of the venue etc.  I think Peel will be remembered in this positive manner like this for his contribution to alternative music direction in the lifetimes of us who heard his stuff, and that should last at least a century!  Good going by anyone’s standards.  And at least locally in Wales we have Adam Walton maintaining an airplay outlet outpost in a similar vein.