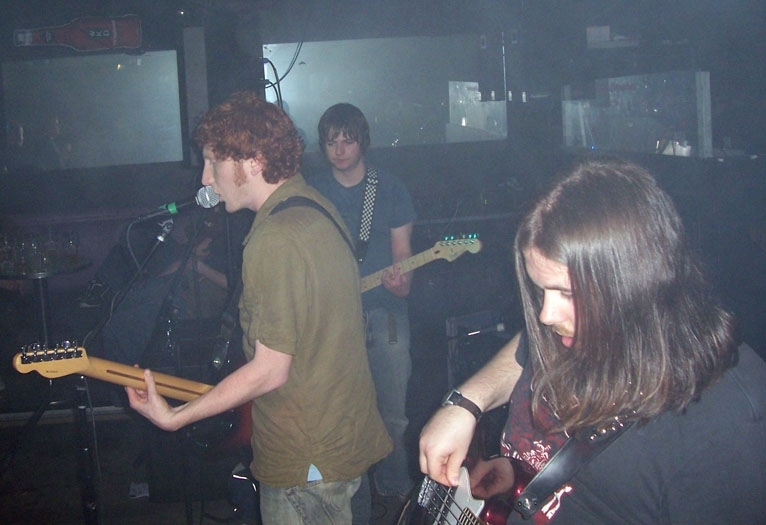 (review by neil crud, pic by ste sync)
Twenty three minutes! That’s the time we took from Menai Bridge to Rhyl in the Crudmobile (I use Red Bull rather than diesel). Two gigs in one night thanks to Akira The Don (see review) finishing at 10.45pm, we (an alcopopped Ste Sync and myself) got to Blu as Giant were finishing their set. We had to make the effort as a live performance by Jives Room is an event in itself, and a rare one. If they played live regularly you’d wonder how frontman Kyle could fit it all in, with his Gintis commitments, his solo career and the hairdressing salon chain…

Third guitarist Aled was absent – Leeds Uni being too far to nip down on a Wednesday to play a gig in Rhyl, although I used to hitch between the two areas every fortnight to sign-on and then back to Leeds to err… um… work, as a roadie at the Polytechnic.

So Aled’s normal calming influence on the band wasn’t here and bassist Lewys was well up for it (or high, or both) as he carried me to the bar when I walked through the main doors, and his jolliness continued on stage with exaggerated piss taking rock posing and general rowdiness. The whole set was pumped up and pumped out, like I said; that psychedlic calm that Aled gives the band was not here and it was almost as if the cat was away so the mice would play. I think I counted at least two new songs, both high tempo smattered in a short sharp set culminating in Kyle finishing the final song Mac on Lewys’ shoulders and then diving off onto Gwynn’s drumkit, injuring the poor drummer! Great to watch!