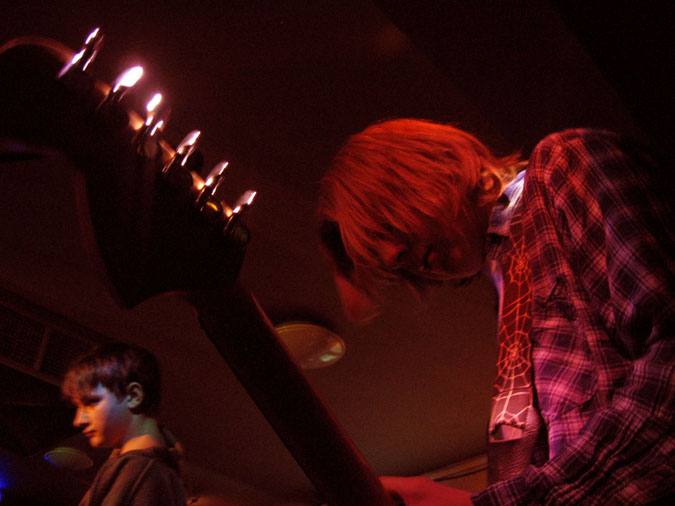 The late cancellation of headliners Three Minute Warning left many punters upset and disappointed, but it also did mean you could turn up at this packed night at 10.30pm and not miss the first band!

That first band happened to be Anubis (pic above) from some godforsaken place in north west Wales. My drinking buddies for the night were Andy Fatman and Steve Sync. Fatman had this to say,
’Anubis’ bass player looked like an East European immigrant in need of a home, a Magic Numbers guitarist, the long dead ghost of Kurt Cobain on vocals and our bin man on drums.’

Sync was a little more poetic with, ’Hobbit’s Middle Earth badger road kill, again Kurt Cobain on aspirin instead of guns. Jives Room attended and the more I listened, the more Anubis sounded like them; albeit in a Franz kinda way. Hi (five) singing and backslapping. Exciting shit for young guns.’
I dunno if any of that made sense. The blond guitarist/vocalist had his instrument far too loud, drowning out the rest of the band. I remember those days when you’d soundcheck then sneakily turn up when you start your set. The only problem is if you drown out the drums the songs lose all their punch. But who gives a fuck it’s good stuff and the second week running I’ve found a band who operate outside that manufactured punk norm. A band who’ll use dynamics and structure a song with thought and provocation, rather than by the Green Day music by numbers formula. Yes, excellent stuff. 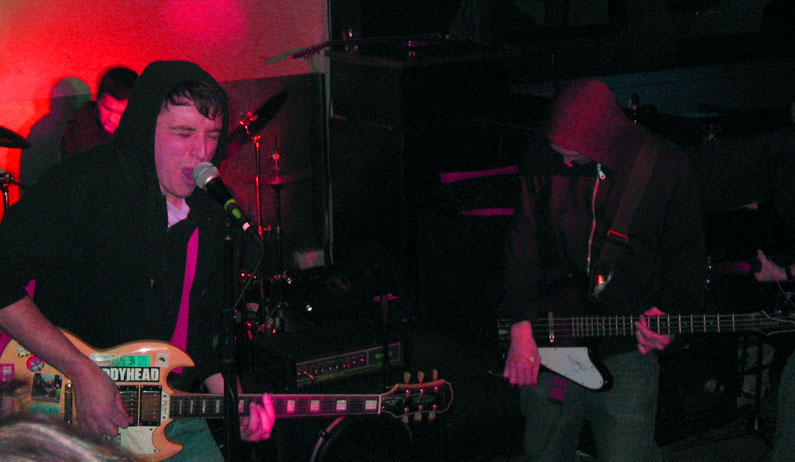 Jacobi (pic above) may come from Colwyn Bay, and with their hoodies up, it may well be the notorious Peulwys Estate – Boys from da Hood. Sync was getting worse for wear,
’Gays from the black stuff. Noise pollution. If people drowned their cats in public. Elephant drowning in a pond. Field mice dancing. Oh fuck, Jamiesons.’

He did manage to string a little coherence with, ‘They’re like Rush in a 80s way, bananas. Hoods down, plectrums out, phallic measures.’

Being sober(ish) I remember Jacobi as indie-prog, which is becoming more and more apparent as young bands search for that hidden chord – the ‘H’ chord. Very similar to Newport’s Robots Talk In Twos, but without the vocals, or very little vocals. Words get in the way. The other musos in the audience watch tentatively and, as I did, love it. Hope it gets big and Jacobi (and Anubis) get big before saturation hits the stage and Chris Zany Moyles is playing it (Jeez! I heard Steve Wright play ‘Smells Like Teen Spirit’ on Radio 2 the other day! What next? Gloria Hunniford documents the life of Johnny Thunders?)

Fuck me, there’s so much good stuff around at the moment – it’s great – pity there’s only 24 hours in a day.

Dominic from Jacobi said in 2012, ‘This is the gig we have a recording of. Two of us were suffering from throat infection, colds, that sorta thing and ended up getting cantankered. During the last song Matt sets his pedal on repeat for the epic noise outro and then dashes for a piss he was holding in for an hour’s set and walks into a guy taking a shit but as there was no doors to the cubicle everything was on full display.’