This BBC Radio Wales broadcast was more like a showcase for the musical dignitaries of the Bangor area, rather than a gig so to speak. With advertising only through the host, Adam Walton’s show after 10pm on a Sunday night and on this website, it was only those who listen or read who are going to show up. This was perhaps an opportunity to exercise old-skool tactics of using the local press and fly posting – both of which would’ve brought far more punters to a not-so regular venue. Let’s face it, star studded and pedigree are words allowed when mentioning this show. 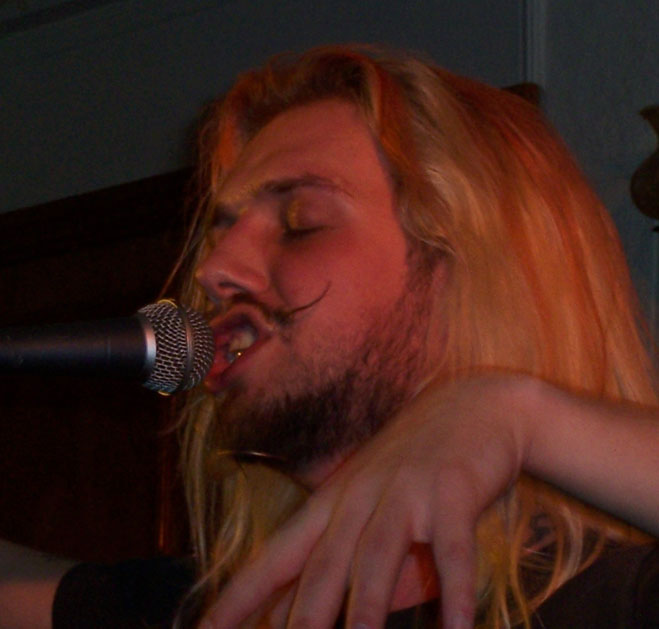 The 60 or so faces in the crowd included members of Ectogram, The Hollow, Kentucky AFC, Alien Matter, Skinflick, MC Saizmundo, Inferno, Sons of Selina and they/we were all treated to an opening set from Brave Captain.

Martin Carr has that pedigree of being an ex-Boo Radley; the scousers who were sort of in the boat just behind the tidal wave that was Brit Pop. He relocated from the promised land to Cardiff and I must’ve chosen all the wrong songs to randomly download off his website. Expecting a chilled out, ambient performance, this was an unusual set up with Martin on noisy loud guitar, a tall bassist with a distortion pedal, a drummer playing to a kick track who hit out with pure conviction and 2 one handed keyboard players (for some reason). The songs were good, which is about the extent of my hayfever addled vocabulary today! You can download Brave Captain’s album for free from their/his website – bet I get there before you…

We were then subjected to a set by the Acid Casuals, or a hybrid of them called Technocrats. Being a BBC event this was free admission, but we still felt short changed when the entertainment was someone walking on pushing a button to start the half hour mix and walking off. You could say that The Killers and Green Day play in Bar Blu in Rhyl every Wednesday because the DJ plays their CDs – this was the same thing and pretty pointless for a ‘live’ show.

Maybe it was the intention to simmer the crowd down before the advent of Akira The Don. He gave us a little taster when he joined Brave Captain for their penultimate song, and the Martin Carr association was wholly evident as he took his place behind the keyboards for Akira’s set. A computer, a guitarist and co-girl vocalist complimented this Anglesey rapper/crapper/madman/pure entertainer. Listening to him being interviewed a while ago on Adam’s show, I envisaged this half-caste dude draped in gold and shades, so it was quite a contrast to see Akira (also called Adam) return to his roots from Cardiff being small, white with long blond and pink hair and a Van Dyke goatee to boot. It’s a pity I’m out of the country when the show is broadcast on Sunday night as it’ll be interesting to see how the Beeb cope with Akira’s colourful language. I’ve said before that radio is the last bastion of broadcasting decency. You can hear and see the word Cunt on telly after 9pm, but you say Shit or anything coarser on the radio and Mrs Whitehouse will be back from the dead to haunt you (in an Offcom kinda way). So when Akira starts singing about his Dad being a Banker and then you put your fingers in your mouth, stretch your lips and it becomes ‘wanker’ then its gonna make easy listening. The song about AIDS was incredible, in fact the whole set was just that – incredible, incendiary, wholly entertaining and would have for sure converted a lot of people tonight. I’ve always associated ‘rap’ with boys from the hood putting caps in each other’s arses (sorry, asses) but this is different, this is better, this was Akira The Don.