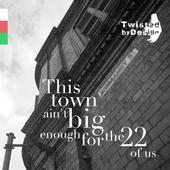 This Town Ain’t Big Enough For The 22 Of Us is a compilation CD showcasing 22 of Cardiff’s emerging indie bands. Which, if you consider the size of the capital, is one helluva lot of indie bands! And hence the title.

Dempsey’s and the City Arms which bookend the street have been – through Twisted by Design’s sterling efforts – providing musical sustenance to the city’s floppy fringed community for the past 7 years. Situated between them Clwb Ifor Bach takes care of all the live action.

Womanby Street as indie HQ is a pleasing concept as it has so far escaped the kind of gentrification that has blighted so much of Cardiff. Heartening that while vampiric property developers are busy sucking the soul out of a city and leaving behind a corpse that looks not unlike Swindon, there are kids with guitars and interesting haircuts trying to breathe some life back into it.

What of the CD itself? Considering its indie-specific nature this musical offering is surprisingly diverse covering all angles from the fey to the furious. Personal highlights include Sweet Dreams, Sweet Cheeks by mucho-hyped Los Campesinos! How can a bunch of students who don’t know the correct day on which to put out their rubbish bags write such a great song?

Invincible by Shake My Hand is an amusing slice of life about the disappointing schedule on Grandstand and being, ultimately, invincible. The lyric: “Do you fancy a cup of tea? Fuck, we’ve got no milk. Ben do you fancy going down the shop? No, you’re lactose intolerant. Fuck it,” has been swimming around inside my head like a demented neon tetra all week.

And there’s plenty more where that came from. In fact the quality of tunes throughout is consistently high and proof that Cardiff’s indie scene right now is in very rude health indeed. And if you needed another reason to put this in your Christmas stocking it costs only £5 from Spillers, the world’s best record shop. Enjoy.