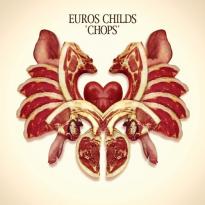 Euros Childs‘ solo album is defiantly pastoral. There are donkeys and seagulls, harvests and beaches, islands and the sea. Chops also explores the lost landscape of childhood, of circuses, seaside holidays and… pygmies.

The album begins with Childs actually waking up and recording a song he dreamt-up in his sleep. There is no musical accompaniment just his groggy vocal telling of Billy the Seagull. From there it is straight into Donkey Island a blissful, up-tempo, infantilist ditty about living on an island with donkeys – naturally. Dawnsio Dros Y Mor continues the pastoral theme and Slip Slip Away with its nonsensical Lear-esque lyric introduces, musically anyway, the album’s first elegaic moment.

Costa Rita is the stand-out track, a quite wonderful melding of South American rhythm with a queasy Welsh seaside aesthetic. It’s the story of an ice-cream man who falls in love with a peanut seller but, like the summer itself, it is a romance doomed to end. Without doubt Costa Rita is one of the best songs Euros Childs has ever written and contains my new favourite word: shakamooka.

Stella is a Pigmy is in 3 separate parts, scattered throughout Chops. Each subsequent version acquires more lyrics and becomes increasingly sinister and weird. It lends the record a darker edge and it is the 3rd version of this song, telling of death and scavenging vultures, that ultimately ends the album.

My Country Girl, Circus Time and Cynhaeaf form the philosophical core of this record. In each there is an overt identification with the pastoral, to the extent of being openly anti-urban. “My mind’s in the city but my heart’s with my country girl” Childs opines in a country and western pastiche; “Had enough of the city” begins the gorgeous Circus Time; and in Cynhaeaf, which means harvest, he repeats that one word over and over until it becomes an incantatory celebration of nature.

Hi Mewn Socasau is a more upbeat Beach Boys type of sing-a-long that sets you up nicely for the solar plexus blow that is Surf Rage, an achingly beautiful sea-bound pastoral elegy. If you haven’t already died and gone to melody heaven by now First Time I Saw You will finish you off completely. A stunning 8 minute love song that marries what is, in essence, a folk song with a strident synthesized backing. It shouldn’t work, it ought to be horrible but turns out to be an inspired hybrid.

Many of the songs on Chops are about escape which is apt given that Childs has thrown off the shackles of being in a band he has fronted for over a decade. Gone are the schizoid shifts in tempo that define Gorky’s Zygotic Mynci records; gone the abiding presence of the violin. What remains is Euros Childs’ genius for melody, a gift we are all fortunate enough to share in, thanks to this inspirational solo album.

Chops is available on Wichita Records.