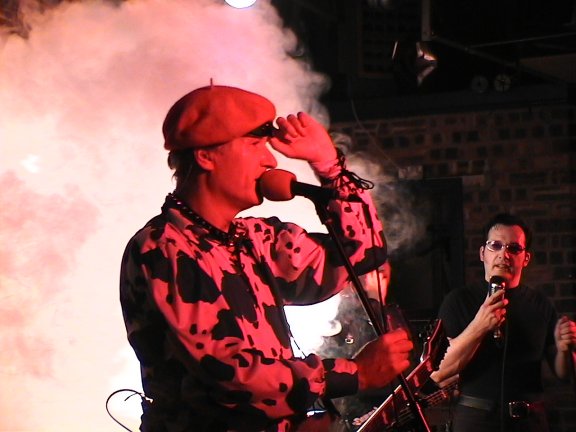 It all slotted into place really. Steve Sync accompanied me and I did my monthly stint on BBC Radio Wales with Adam Walton. We had to pre-record it because we were off to see The Damned, so we played Blind Justice and the Psycho Sexual Sex Terrestrials, had a quick coffee with Adam and Ben Soundhog and headed for Central Station.
Parking somewhere safe in Wrexham town centre and then having to run the gauntlet of Chavs through the streets is quite an experience! But we safely made it unscathed right on cue for The Damned to alight the stage.

I had earlier commented on air that I’ve seen these 15 times, a slight exagerration I’m sure, but let’s try and recap anyway:

I get even more excited when Captain Sensible announces they’re celebrating 30 years since the release of that seminal album ‘Machine Gun Etiquette.’ He then realises he should’ve said 25 years, and we could’ve corrected him for it’s 26 years!

Jesus! 26 years since first I pogoed around my bedroom to that LP, torn between which one I was gonna be in my bedroom mirror performance… Am I the cool slick Dave Vanian or the guitar god but circus clown that is Captain Sensible? 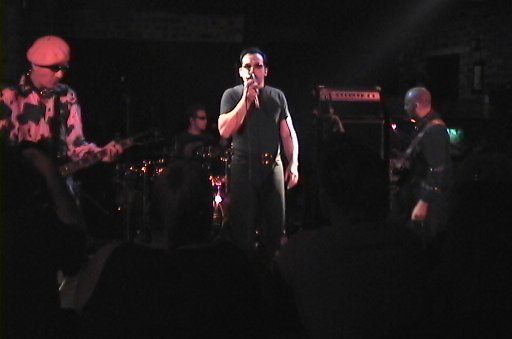 So The Damned kicked in, as that excellent LP does, with Love Song, and following the track listing to Second Time Around then I Just Can’t Be Happy Today. The sound was awesome, it was loud enough to raise the roof on this wet Sunday night and the power took your breath away. I did think we were going to be treated to the album in its running order and entirety but that stopped with the fourth track Street of Dreams, which was introduced by acid crazed keyboard player Monty as ‘Cunt’ !!!

The immense sounding History of The World preceded the lament to Michael Jackson, Neverland, which is off the latest Damned release ‘Grave Disorder’ (available and highly recommended on Nitro Recs). By now drummer Pinch was looking worse for wear and it was announced that he was suffering from a 3 day hangover all in one day after the Rock & Blues Festival. Anti-Pope followed and the excellent free form punk bits where the rhythm section chug along allowing the Captain to express himself and impress us with his guitar skills were smattered throughout this short set.

We even had a Monty solo before blasting into Melody Lee then Plan 9 Channel 7 and more of the free forming with Looking At You which just about covered ‘Machine Gun Etiqutte’ (for now). The Damned did teach the punk fraternity that there was more than three chords available and I was watching the bassist during Disco Man and lost count of the notes played in the riffs, astounding!

‘Chavs are a bucket of turds.’ Shouted the Captain having explained he’d noticed that Wrexham is full of them and they ripped into Would You Be So Hot (their tribute to John Lennon – not!) then still keeping to the latest album, the haunting Absinthe. With Eloise played like it should’ve been in the first place it left enough time to pay tribute to those that have gone before us and Neat Neat Neat was dedicated to John Peel, Joe Strummer and The Ramones.

The encore brought a great treat for Damned fans with Jet Boy Jet Girl, a track I’ve not heard live before, followed by New Rose and the ultimate Smash It Up where a net was thrown over the sprawling crowd, and a punter was invited up to play the last couple of riffs.

Pigstock 2005 – Denbigh How Do I send Music for The Crud Cast?