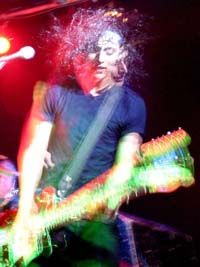 Cardiff band Venus Elixir was just about to take the stage as we got in to the Barfly this evening. A 3-piece combo very much in the “Placebo” vain. Nothing wrong with the way the band play their instruments etc but, I haven’t heard a singer make such a bad noise as that since the last punk rock karaoke night I attended & that was years ago! Not wanting to be too harsh on the poor fella, he did tell us all a few times that he was “proper pissed” along with going on about shagging boys, which I think he enjoyed!
Not that relevant to the majority of us in the crowd but it seemed important to him? Apart from the singing he was a bit of a natural front man, also bashed away at his guitar noisily enough, with the lady bass player & drummer completing a tight unit. Suggest maybe a different vocal approach will allow the band to progress, can’t see it otherwise, which would be a shame as I mentioned earlier, the band play well & have some decent tunes in their set that just need to be delivered a bit more, how can I say……… maybe considerately!

Next up was Martin Grech. I have seen Mr Grech a number of times over the past few years with his full band & doing acoustic sets & although not claiming to be a huge fan have always felt that he is a genuine talent who just needs to find his niche. He came with the reputation of a bit of a protégé about him back in 2002 after delivering at the age of 19 the extremely mature “Open Heart Zoo” album, which was apparently 3 years in the making, he was signed to a major, “Interscope” at the age of 16. The album received tremendous critical acclaim, along with the title track “Open Heart Zoo” being used in a huge Lexus cars advertisement campaign, which must have earnt a couple of quid for the good fella. After this he seems to have become embroiled in record company wrangling’s which has meant it has been 3 years since his last album release, not an ideal situation in anyone’s book, although he has now ended up with a deal with Island records in the UK who are known to have a bit more integrity than the majority of the major labels. Anyway, enough background info & on to tonight’s gig. Unusually for a Barfly gig the set started with a rather dramatic classical intro played through the PA, although nobody seemed to have told the band that they had started playing until to late which led to a rather hilarious panic with the band trying to make their way from the dressing room to the stage, which takes you right through the crowd, who weren’t moving for anyone! These dates are to promote the new “Unholy” album which I think has been given a release date sometime in June, so a lot of the material was unfamiliar & for me unfortunately, uninspiring. It seems as if he has got stuck in some strange psuedo rock sort of thing, whether it is prog rock is debateable, definitely leans towards that. Accompanying this, his band are a very competent lot, with the drummer probably reaching into the exceptional category, worth going to see for his playing alone? As far as Martin Grech’s voice goes, it was as usual, superb. It is a real strength for him, although he’ll have to knock the rollies on the head if he wants to keep it! It seems to me that Martins fortunes in music, which I am sure he will achieve, will not come via the Barfly type circuit or maybe not even the rock genre at all, although with him still being young he is entitled to have a bit of fun with these types of gigs, have a drink, smoke rollies on stage etc. He is obviously a very amiable guy who I notice, spends long periods of time before & after his shows getting about & talking to people, which is never a bad thing so, overall, not the best form I have seen him in & like I mentioned earlier, not really my type of thing but definitely still a huge talent.