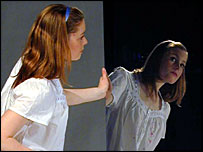 Yeah, I know it’s supposed to be alternative culture but how about some culture as an alternative. You’ve got to keep pushing your boundaries of experience, and safe in the knowledge that there’s none more metal and few more punk I was sure I could see a bit of ballet without compromising my beliefs. Besides, it was my daughter’s birthday and she wanted to go.

So the Pavilion is very nice, chose the dress circle as I was wearing a shirt having come straight from work. There’s not a lot here really, a handful upstairs and a cluster down, sure signs of either the elitist appeal of the genre or the fact that this is just a crap version of the same. It’s a one night show from a touring company, how on earth do the finances work with this sort of turn out, for the artists or the venue? It’s a mystery, a different world.

The show starts straightforward enough, “Lewis Carroll” at his desk on one side of the stage in an exaggerated mime of writers block, before “falling asleep” (yeah right, on the opium pipe more like) then dreaming of Alice, subsequently illuminated in bed on the opposite side. She’s a tossing and a turning before she enters her own dream world. When she, (definitely well over 16 and well proportioned) takes off her nightdress to put on her trademark blue dress my jaw almost hit the bottom floor from the balcony, but even without the benefit of opera glasses I figure she’s wearing some flesh coloured body stocking under her frilly knickers. Got my attention anyway.

There’s some good effects with a mirror that is or isn’t, a meeting with the white rabbit then an excellent falling sequence in front of trippy projections, christ it’s a long way down that hole. Then the first of a few group pieces, and this probably one of the best, I think they were representing water or something (blue streaming wigs), sweeping around our Alice, but already I’m losing the plot, conditioned to Disneyfied history I guess. Is this based on the original story? I’ll have to read it. This is only worsened next with a switch to green wigs and painted face masks, there’s a glowing, misty landscape on the projected backdrop, it’s putting me in mind of something, somewhere else. ‘Nam. The clincher is that amongst the various pieces of classical music they are using for their dances some have been abused in adverts or forever corrupted in association with other mainstream media. For this particular one it’s the very emotive strings piece that is now synonymous with Platoon. So what it really needs is Willem Defoe pirouetting onto the stage before falling to his knees, arms raised aloft, blood spurting everywhere. Or Apocalypse Now: The Ballet, that’d be great. “Hey soldier, who’s in command here?” “The choreographer, motherf*cka”.

Dragged back to some semblance of a storyline, there’s some caterpillars/butterflies, one obviously slips but the whole section doesn’t seem to display much visual style or ordered pattern. Flowers as well, the Cheshire cat of course then the tea party scene with a massive luminous green smiley space-hopper converted into the tea-pot. This is good stuff, and the expressiveness of the main participants brings a smile. Some bits work well and are engaging but others drag. Tweedledum and dee appear briefly as some kind of Siamese Sumo wrestlers/ravers but this seems like a forced add-on. There’s the bit with the chess set, very slow, stately and atmospheric, lighting combining with the music well. The red queen is red only in hair, but strikingly tall, some lady, and is the focus for the final decapitation scene (in the dream story anyway), which ultimately disappears in a massive blood red drape drawn over the cast, which when removed again means then it’s back to bed for Alice. The various characters emerge to watch over her restless sleep and then lo-and-behold the light again falls on the writer scribbling furiously to a finish then standing and clasping his completed work to his chest. Job done, time for the come down. And a curtain call.

Walking back to the car pass an elderly couple and overheard them say “the choreography was uninspired, the repetition tedious”, so there you go, a balanced review from someone who probably has more to judge it against but all in all a reasonably enjoyable time. There’s more ballet upcoming at the Pavilion should you wish to broaden your horizons etc, think I’m satisfied myself, there’s also a “Memories of the Black and White Minstrel Show” show. Except they seem to have forgotten about the blacking up, as far as the advertising pictures of the cast go. Funny that.

the drugs do work