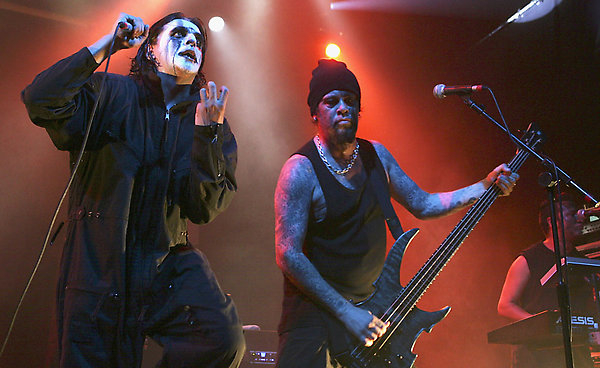 (by guy salvador)
Another Killing Joke tour, another long trek, well not quite, 50 minutes to Bristol Academy really, but again, disappointedly, no South Wales date on this tour. Not that this matters as I have, and I’m sure always will, be prepared to travel wherever the now legendary Jokers play. This gives you a clue to the reverence I hold this band in. In my mind one of the finest ever.

Unfortunately I missed tour support “Tribazik” who must have been on stage very early. Listened to a couple of their tracks on their website & was looking forward to seeing them as the material sounded promising in a tribal, experimental & dare I say it, even though I hate the genre metal way. Suppose I’ll have to get hold of a copy of their forthcoming “Usual Abnormal” album for further reference. This meant that the first band we got the unfortunate opportunity to sample tonight were “October File”. Singer reminded me of “Rob Halford”, of the horrible “Judas Priest” to look at with more gruff throat destroying vocals than the said fella . The overall sound was a halfway house between one of the dodgy “Emo” type things that are kicking about nowadays & old rock. I think it is fair to say that myself, along with the majority of the crowd who were by now starting to pack into the venue were generally disinterested in this unoriginal, overworked sound. There is a new EP “Monuments” out at the moment, featuring one of the songs I do remember form the set called “Blood & Sweat”. Not wanting to come down to hard on the guys in the band, what they play is tight, well structured & loud but uninspiring in the whole & I was glad when it was over. Now, nearly into their 26th year! Killing Joke, with their two original members of Jaz Coleman & Geordie Walker, along with Paul Raven, who has been with them since very early on, so is really a sort of original, wouldn’t be the same without him that’s for sure. Joined tonight by a new drummer whom, I didn’t grab his name but, is the closest the band have come to replacing original drummer, “Big” Paul Ferguson. Starting the set tonight with “Communion”, the band play a great sort of best of set covering most of their albums, including little played live tracks such as “Butcher”, which was the only track played from their second & one of their best albums “What’s this For?”. Of course we get “Wardance”& “Psyche”, it wouldn’t be a Killing joke gig without these & alongside “Primitive”, Bloodsport”, “The Wait” & “Complications” it was nearly the entire first album played. Also playing “Darkness before Dawn” from the classic “Nightime” album, which was a treat. Alongside this was a “Asteroid” & “Death & Resurrection show” from their current album. Killing Joke have no less than 3 albums out this year or very soon, these being their new studio album, “Hosanna’s from the basements of Hell”, a spoken word & ambient 3 CD collection from Jaz & Raven called “ Gems of Power” & the CD & DVD of their 25th anniversary shows at the Shepherds Bush Empire in February this year. With all this & a very healthy world tour in process the band are very much alive & well & as I have mentioned in previous reviews, in some of the best form ever. Take notice or be a fool, the Killing Joke is on you!

Gigs at The Masons in October My Turn To Kill @ Bar Blu, Rhyl