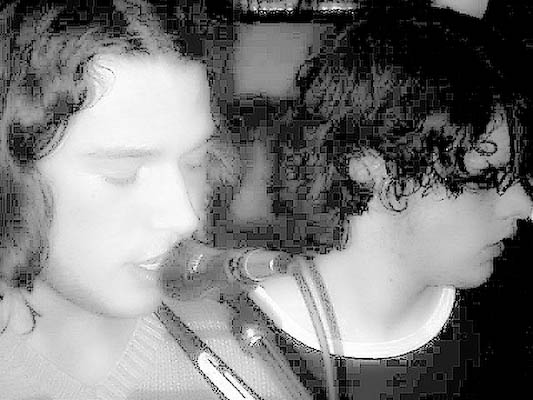 (crud) – With the lurgee coarsing through my veins I slumbered from my bed of rest to clamber to the house that is Steve’s and watch Liverpool destroy European opposition. No, that was in the 70s & 80s wasn’t it? OK, so we watched Liverpool do the business against some Bulgarian no hopers. Then the heavens opened as Our Lord complained bitterly over the fact that Fairziff was putting in an appearance for the first time in about 6 months (bar Xmas).

(sync) – Crud, Fairziff, and myself arrived at an already very busy Blu at 9ish, which was nice to see, as it had been a few weeks since I’d seen this many people here, especially as they now charge £1 entrance. The quid fee is well worth it for the extra quality the (now regular) sound engineer brings, and I hope never to see a band struggling through their set in Blu, with nothing but the PA to blame.

Already in a good mood tonight after watching my beloved Liverpool win 4-2 in Bulgaria, we hit the bar (luckily Liverpool didn’t tonight) in high spirits in anticipation of Gintis playing. I’d seen Gintis perform at Blu 2 or 3 times before with a different outlook on their performance in terms of quality and form each time, so when Crud and myself went into the studio with them a couple of months ago for them to record their Adam Walton session for Radio Wales, I got to know them and their music a lot better. I now know exactly what to expect from Gintis, and I’m still learning more and more about what they’re capable of. They are one of those bands who prefer to turn out top quality songs over time, rather than quantity, raced, half finished songs that I hear in abundance from other bands on the scene. 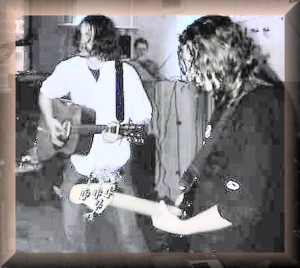 (crud) – Acoustic guitar thru a distortion pedal, always a good start, even if a little Alarm-ish. I reckon Dionitic (pic left) are 3 or 4 rehearsals too soon to be playing live, but credit to them for a quick stand in when one of the bands pulled out. Couldn’t suss out if the stuff at the start of their set were covers or not, but it sounded pretty good, helped by the new improved sound system here at Blu. Its still a vocal PA but is much better than it used to be. The Dudley punks seemed to be into the almost folk-punk feel of Dionitic & rattled, jumped & shoved throughout their set (either that, or they were taking the piss). My interest waned when a plethora (oh alright, 2 or 3) of known covers emerged & I tried to order Lemsip at the bar while Alcopop Sync & Carling Fairziff discussed the logistics of bringing a van load of retro computer games from County Armagh.

(sync) – After a quick intro, Steve Gintis strummed the opening chords to ‘Oliver’, which happens to be one of my favourites at the moment, and as the rest of the band joined in, I knew this was going to be a great gig. The overall sound was the best I’ve heard them play yet, and I think this was not only due to the sound engineer, but also, an added wave of confidence over the band who have had much praise said about them in the local and welsh media recently. After Oliver they went straight into ’Physicist‘ (yes, I’ve shortened the name), and then a new one, which after the gig, Dave Gintis told me the name of, but it seemed to leave my memory as the alcohol left my blood overnight. Then came ‘Yet No Quizzical Eyebrow’ and at this point even the ever-critical Fairziff stated that he hadn’t heard a B Side yet. Then came the up beat ‘Anatical Kind’, in which Carl gets to exercise his vocal chords at a full on Cobain-like volume which also sounded great, and this song also has the best mind blowing psychedelic ending I’ve heard for a while. Gintis look a lot more comfortable in front of a crowd now, when I first saw the band, Carl looked embarrassed to be there, but now he looks like he’s enjoying himself making witty quips to the crowd in between songs. We then heard another good new song (didn’t get the name), and after a few cries for more, Steve and Carl stayed out as the rest of the band left the stage to play us what they’d promised on the L2W message board ‘a rap song played in a country style’ which turned out to be ‘The Fresh Prince Of Bel-Air’ theme song. 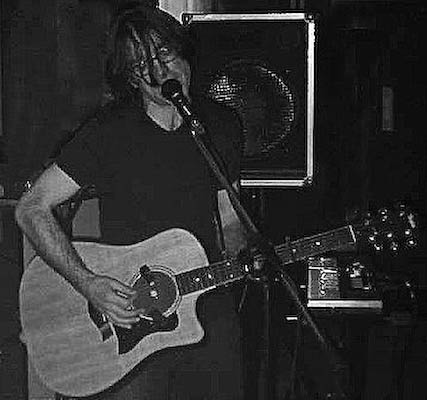 (crud) – As his name does suggest Vinny is Peculiar (pic above), I mused over his set this morning after, where I should’ve been tucked up in bed I was jacking up my car to change a flat tyre only to discover there was no spanner to get the damn thing off. So, while a walk in the glorious spring sunshine would’ve any other day done me the world of good, I was left breathless and in need of oxygen. Unfortunately Vinny didn’t leave me feeling like that, but there was enough content in his characteristically bizarre set to keep the eyebrow raised, the smirk alive & the interest full on for a short while. Talking of jacking up (maybe not cars), I went into the bogs in a local supermarket to find the lights were blue, this is to prevent ‘unsociable behaviour’ so the scallies now jack up in the aisles. Anyway, back to Vinny – playing this kind of show in this kind of venue is always going to leave you battling with the crowd for their attention. Vinny; a very witty Bob Dylan meets Elmo Fudge with an American 1980s new wave haircut & David Byrne attire would be more at home opening up for the Comedy Club, rather than an alternative venue. The amusing content of sperm donations & the fact that Jesus stole his girlfriend was lost under the constant babble of the crowd, & it would be good to see this one man with guitar & Dixons keyboard promote his ‘Growing Up With Vinny Peculiar’ LP in better circumstances. Check out his excellent website (link below)

(sync) – If tonight was anything to go by, the Radio Wales outside broadcast on the 24th March at Blu, which Gintis will be playing at, should be a night not to miss. Come along; experience the phenomenon that is Gintis.