The weekend began on Friday night with a 3 hour pub crawl that took in all of 2 pubs, but enough Kingston Press cider to send at least one head westward! The weekend finished at 12.38am Monday when my head finally hit the pillow, having bizarrely been out on a Sunday night to watch a gig. Gigs just don’t happen on Sundays do they? My mind casts back to the Sunday night gigs I used to put on at The Imp in Colwyn Bay in 1987, they were always packed out affairs & everyone was home for 11pm. So what happens in Prestatyn? They have a 12.30 licence & the err.. ahem! Football on. The warming thing about being Welsh is that you can really get behind England when they’re winning, & not be bothered when they lose. Unlike a lot of our English neighbours / immigrants who have a jolly good laugh when ‘The Taffs’ lose (see you in October…!). With TVs set up everywhere at this venue it was hard to avoid the footy, with 6 screens to view in the room we occupied Steve Sync reckoned it had been set up for a spider to watch! 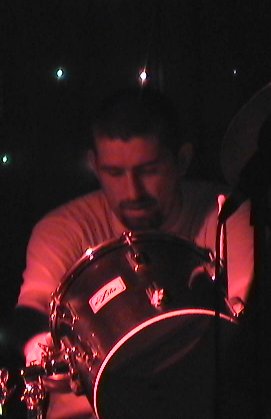 So Kagnee did their stuff around 10.30pm – it’s the 3rd time I’ve seen them in as many weeks I think – so the songs are more recognisable. The funny thing about these bands from Liverpool who play regularly on the coast is that they do more gigs here than in their home city. A bit like Def Leppard conquering America before the UK, but err.. not quite on the same scale (plus Kagnee have an ambidextrous drummer – sorry, couldn’t resist it). The music is choppy chippy type ska stuff with a punk attitude thrown in. Lots of self depreciating stuff, totally unnecessary but it does show that this is a band with only a handful of gigs under their scouse belts. (‘This one-nil victory will be momentous occasion for England’) 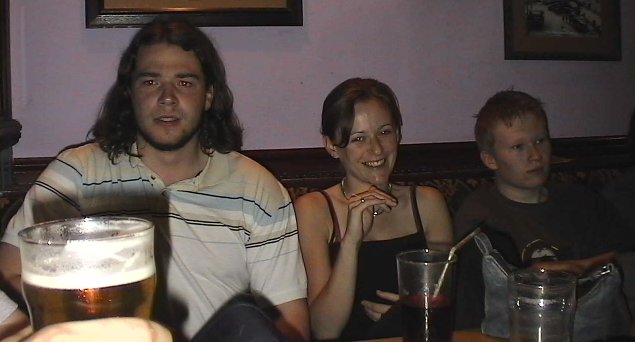 Which brings us to Gintis, a band reviewed no less than 6 times on these pages, A band I’ve seen no less than 8 times, a band featured on Radio One’s Sessions in Wales last Thursday. Incidentally, Radio One never played the 3rd Gintis session track on the advice of producer David Wrench, who said it was too wishy-washy. Now lets take a look at this, if David Wrench was the producer why did he produce a track that he didn’t like? Did he get paid for doing it? Or was it an after-thought when Gintis described him as a great guy, but fucking weird? (‘And James was pedestrian as that free-kick sailed past him.’)
So Radio One on Thursday & brought bang down to earth on Sunday to play what looks like a holiday camp pub staffed by cocky lads in England shirts & George crosses fucking everywhere. Does Meibion Glyndwr know about this stain on their soil? (And Zidane cooly slices the penalty home).
Gig number three with Jives Room frontman Kyle on guitar, yes, the similar Half Man Half Biscuit guitaring is still present & would do better if it was given the FX treatment now’n’then, but there is certainly a far more relaxed feel about this band. And its staggering to think of the attention they’ve drawn already when they can barely tune their instruments (I had to tune Carl’s guitar for him at the private gig last week!), so the potential is enormous & I suggest they play as many gigs as possible (barbeques, weddings, childrens parties, sex shops, bus stations – anywhere!) before doing a serious assault on the big time. There is only one reason for a band like Gintis & that is to take on the world, if they wanted to be a pub band they can learn a load of covers & play the camps instead. 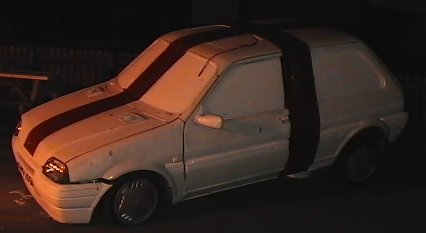