Good grief! How deaf? That high pitched sound that screams in your ears for the next day tells you it was very loud. The eardrums will still be reverberating into next week! But the pain is worth it for I have a mission during this review to get you to buy 2 CDs; Stuntface‘s ‘The Incredible Unstoppable Titan of Terror’ & The Damned‘s ‘Grave Disorder.’ Two recordings of stunning quality, worthy of a place in your collection. ‘Grave Disorder’ ranks right up there with The Damned’s finest, taking the best elements from the raw punk of the debut LP, the refined glory of ‘Machine Gun Etiquette’, the psychedelic purity of ‘The Black Album’ & ‘Strawberries’ and the gothic subtleties of ‘Phantasmagoria.’ Thankfully the poorer sides of ‘Music for Pleasure’ & ‘Anything’ were omitted.
So what are we to expect from a band I have witnessed several times, Colwyn Bay (81), Chester (84), Finsbury Park (86), Manchester (87), Llandudno (02)? How do you review your childhood heroes, a band you feel stupid enough to have tattooed on your arm at the tender age of 19?

The Llandudno show 18 months ago was admittedly seen through rose tinted glasses, the performance was spoilt by the terrible acoustics of that hall & a lack of intimacy; it was an us & them feel to the night. Here in Wrexham (I think the band’s 3rd visit to the venue) they are right on top of you; literally at some points, as both Captain & Dave Vanian got over excited through the 2 hour set.

When someone shouted out ‘You old cunt’ at Vanian, he noted that the worrying thing is that we were all catching them up, the upsetting thing is that he’s got 11 years on me & yet looks far younger (the twat). I was also probably the youngest in the bar before the show & it’s something maybe The Damned & their contemporaries need to address if they wish to extend their careers, they need a younger audience! Killing Joke have managed it with great success. But I suppose Captain & the crew wouldn’t play these smaller venues (500 capacity) so we were glad for the opportunity to get close & also have fun. 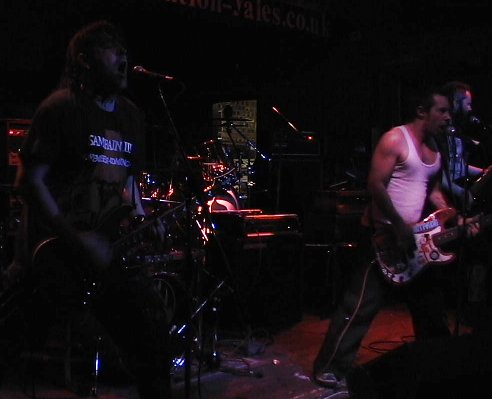 So this aged audience were beforehand given a lesson in pure punk rock from the homegrown & wonderfully talented Stuntface, & they received rapturous applause & full attention. It was hard not to give them your attention as it was far too loud to talk, so you had to take note. And take note we did! I’m no stranger to this band having seen them 1st on my birthday in Nov02 then a further 6 times last year, so there’s not a lot I more can say about a band who ply their trade in the fastest, yet melodic punk rock you’ll ever hear with not a beat out of place. So my advice is simple; buy their album & go and see them

With Damned bassist (& Vanian’s wife) Patricia Morrison experiencing motherhood (at home, not on stage), the 4-stringed reins were taken up by Stuart; not half as pretty admittedly, but a much finer bassist more adapted to the 100mph sprints some of The Damned’s tunes need. The bass position in this band is cursed, just ask Captain Sensible, Algy Ward, Paul Gray, Bryn Merrick, Moose (I think) & Patricia (& probably others), who have all been there & fallen by the wayside.

So with Sensible adorning a very fetching leopard skin toga poised on guitar it was left to Monty to tinkle the opening bars of ‘Melody Lee’ & we were off. A mischievious Dave Vanian seemed like a schoolboy unleashed, or a husband away from the wife or perhaps full of beans being a Dad for the first time. Whatever, he was very witty & very much at one with the crowd, bringing in audience participation to the extent of letting local hero for the night (Brian) up on stage to sing ‘Neat Neat Neat’ for him. This was a very different set to the Llandudno show, very raw in comparison but much better for it. If you want an excellent taste of that tour 18 months ago I strongly recommend the DVD ‘Tiki Nightmare’ which was filmed at their London show & displays the band in fine form; as they were tonight. You do have some quarters who’ll refuse to come to a show like this for the reasons they want to remember The Damned for what they were & not some cabaret act doing the rounds, but that notion is flawed by the fact that The Damned have always been a cabaret act. They have always clowned around, which has probably stopped them being one of the biggest bands in the world, because on songwriting ability they’ve produced some remarkable tunes over the years. 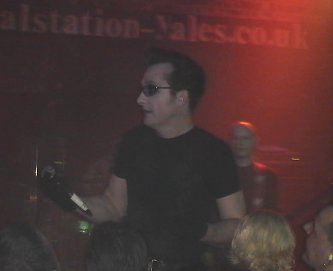 Treats tonight were, from memory & I think in order: Melody Lee, I Fall, See Her Tonite, Love Song, Anti-Pope, Street of Dreams, Plan 9 Channel 7, Amen, Absinthe, Fan Club, Ignite, Under The Floor Again, Neat Neat Neat (in which Brian sang & Vanian climbed into the audience & cheered along), New Rose. The inevitable encore gave us Curtain Call, History of The World, Looking At You, Smash It Up (parts 1+2). I managed to film the last song & got some spot on footage of the marvellous guitar skills of Sensible (now changed into a pink dress & blonde wig) & plenty of chaos as the band bid farewell to an appreciative Wrexham amongst far too many decibels of feedback.

Like I said; buy the Grave Disorder CD, if you’re new to The Damned, it’s the perfect introduction, if you gave up on them by the time Eloise slipped out of the charts then this is the perfect refresher. You too could be tattooed.