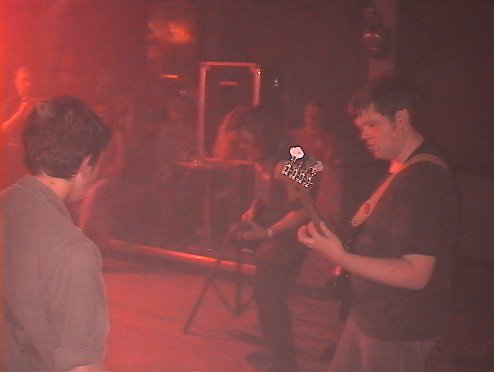 We’re in a taxi in buoyant mood; its half-time and Wales are playing well against Poland. My mobile phone rings out I Believe In A Thing Called Love by Darkness; it’s a cheesy ringtone I know but I can’t be arsed to change it. It’s Carl Gintis asking if we’re going to Bar Blu tonight. I explained that we were on our way on account that he had hyped up Micrographia on my Message Board enough for me to stray offside (like Robert Earnshaw). Carl then asked me if I enjoyed the lament they did for me at 2.20am last Sunday. I received an answer-phone message with a 2 minute song played live called Apple Pie, you can hear it on my new radio show (for this week only). I have mistakenly credited it to The Dave Cox Gay Dance Troupe, for I thought it was him and his (pretend) mates winding me up cos I didn’t go to the Dudley on Saturday. But no, it was a private rendition of a new Gintis song. What goes around comes around as Carl went home tonight, 13 pints to the good and pissed on his carpet (ha-ha!).

Alcohol was the theme once again as myself & Sync sank more of the golden stuff, as did Gwynn who got up with his strange friend to strum a few songs very very drunkenly. I did the usual ‘show us yer tits’ and ‘fuck off you hippies’ and got a ‘fuck off’ back, which made a nice change.

The Circuits were due to play tonight but had flicked thru the ‘Rock’n’roll Guide To Non-appearance Excuses’ – on page 37 they found; “Our drummer choked on a wasp and is in hospital.” And duly didn’t play. 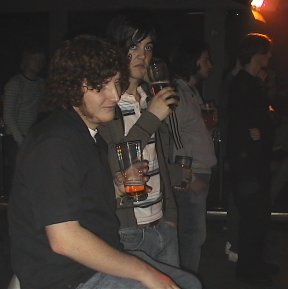 The crowd has changed at Blu since that fateful aborted Jives Room, Gintis gig. People vote with their feet and their feet have stayed home, with the new clientèle being more of a scally nature, here for a night out rather than the music. The place was pretty quiet with only about 70 present – and that is quiet for Bar Blu. It soon became 69 when Sync could sink no more and had to stagger home, and left myself to witness the band from Bangor (I think).

Take Flotation Toy Warning without the singer, take some mushrooms (magic ones now in season on Old Colwyn golf course), take cover & you have an inkling of what Micrographia are about (sort of). Where their contemporaries are playing punk by numbers, this very young band have taken the effects tracks off a Hawkwind LP & turned them into a live set! No drummer, but a great sounding backing track, & that’s fresh coming from me who hates drum machines! Carter were wank! This was over in 30mins, and was like canoeing through mercury waters as repetitive but catchy bass riffs complimented 2 diverse guitars down the ravine. How poetic! Fuck me! I should write reviews!

I asked the Rastin (or Ratskin as others call him) what their demo sounded like; he didn’t have one; he booked them on the word & enthusiasm of Carl Gintis. What a guy! But what a band! – You go out to see countless bands and lots play the same uninspired indie / punk drivel as original as a Loreal make up advert, but occasionally its worth it for seeing bands like Micrographia.