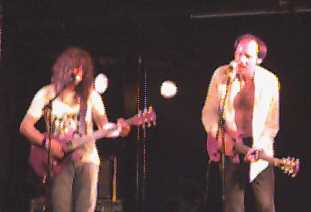 “Well I don’t know how to describe him” they said, outrageous slapstick for the musically initiated I’d say. John Otway the two (three) hit wonder accompanied by “Richard” front man of Weavel and probably one of the most accomplished rock guitarists I’ve ever seen. But this wasn’t rock it was Punk, take the piss punk at it’s best. “I’m really crap and you’ll like me ’cause of it”
The hits in case you didn’t know are “Cor Baby That´s Really Free” and “Beware Of The Flowers Cause I’m Sure They’re Gonna Get You” followed recently by “Bunsen Burner”, couple these with hilarious talky versions of “House of the rising sun” and The Sweet’s “Blockbuster” amongst others and you’ve a reportoire to laugh like hell for. Is it it music or is it comedy? well it’s both. I challenge anyone to watch Otway and not be entertained.

The set opened with “Cor Baby” and the 50/60 (?) something throwing himself into forward summersalts, to be followed by stage diving from a step ladder and head butting microphones. Playing the double headed guitar was probably less difficult than juggling two mics and playing the drum pads in his pockets with a bent spoon in his mouth!

The fact that only 60 or 70 people turned up to watch this over excited wannabe 10 year old on a Sunday night in March is probably a sad reflection of the fact that people seem to appreciate live performance less and less nowadays (christ i sound like Victor!) Otway performed as if he were in front of a 1000 strong crowd, a true professional and hugely charismatic.

Would I watch him again? – you bet!