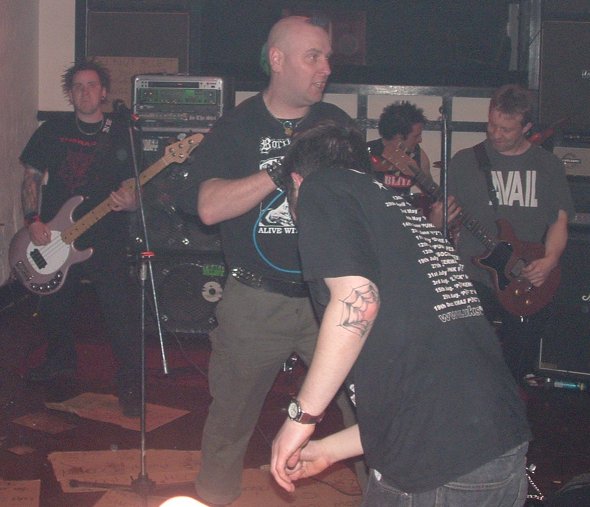 Punk ethics. To me that includes the questionable decision to cycle to the Old Hall from Conwy in some belated half-arsed new years resolution to actually do some exercise, cut down on car use, and being able to get pissed as well (although drunk in charge of bike is still a risk – you’ll never catch me coppers!, well you probably won’t even spot me crashed in some ditch).
Maybe that was a bit ambitious since I hadn’t even been on a bike for some 17 years but hey, I made it. Still, there’s people who were committed to walking to or from there from Llandudno and Colwyn Bay, making the effort, being rewarded by all the evening has to offer. Welcome return of Pete from Alien Matter for a while as well, apparently he’s been working part time as an iceberg…?!? 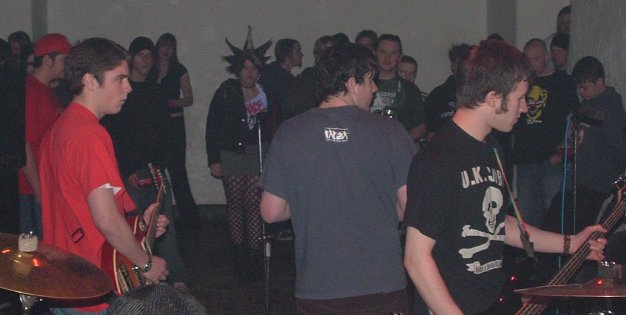 I’d seen Six Year Hangover very recently in Rhyl with the enjoyable sonic abortion that is Gape, they were filling in tonight for The Cox who were taking a break from their busy local touring schedule, the lazy…cox. Their sound was (unsurprisingly) a bit better here, cool relentless guitars with ringing tones, no doubt helped by using more chords than just power ones. Good heavy breaks in their opening number as well, the vocals can sound a little flat at times but generally add to an interesting melancholy feel that sets them apart. It was only when pointed out to me that this all adds up to the much maligned “emo” style that I associated it with such, but there you go, live and learn. Anyway, their relatively unique niche (locally at least) should see them remain worth watching. In the spirit of St. Valentine and Chuck D I’d just like to say “your general subject, love, is minimal, it’s sex for profit.”

L98 were apparently suffering from the loss of a member through being “grounded”. (Don’t worry about it, I still get grounded by the missus at my age!). Still, they started with a pretty tight performance from a young 3-piece, good bass work especially. The vocals were quite surprisingly fast paced hardcore, lacking a bit of clarity but full force none the less. Fantastic to the point simplicity of “George Bush Is A Wanker”, can’t go wrong with that in my book. Started getting a bit sloppy later on with false starts, speeded up White Stripes covers, twinkle, twinkle, guest vocals etc., but that’s part and parcel of bands starting out and building their set, replacing the quantity with quality.

Having recently heard a NO FX track called “Medio-core” (“How were the band? They were Ok”) and being struck by the truth of that for some shows, I was prepared to be a bit harsher in my reviews and if things were merely ok I would say so.
This System Kills were fuvkin brilliant. Can’t believe they are not more well known than they are for putting in performances like this, hopefully it will come with time. As rightly described (on the tin) in-yer-face hardcore punk, metal edge to the riffs, with plenty of backing vocals (including harmonies!) from the bassist. Excellent frontman, full of banter, whether talking about the realities of their lyrics or hanging on to the bars at the side of the stage, berating those who couldn’t be bothered coming down to check them out. One guitarist with radio mic also went off to check where the fuck everyone was while playing, but that’s just showing off!

For the first time tonight I noticed more people/kids were off round the back of the bar than there was watching the bands. Fair enough, they’re paying their money and taking their choice, while allowing more bands to be booked for those of us that are interested but as the singer pointed out “sitting by the toilets, smoking dope, what the fuck’s that going to achieve?”.
In t’olden days The Grand Hotel in Pen formed a similar youth club function for me but also provided inspiration to get out and do something else. Without a doubt those who are wearing the punk™ clothes and believing that is enough will be growing up into the mainstream brain-death in no time at all, see ya. Or maybe because it was the commercially sponsored night for lurve there were other priorities for those young and hormonal. For those of us who were interested the show went on. 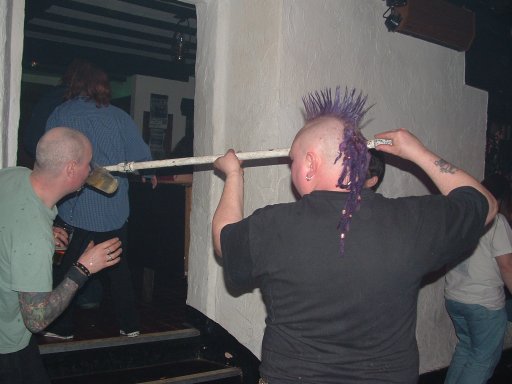 A classic piece of stage show was the appearance of the pint on a stick. Telescopic no less, and drinks were distributed to anyone in range, including to the surprise of those sitting up by the bar. Some contributed stuff back in, in the end it was being topped up from a bucket of home made wine, brought a great laugh to everyone there. A whole load of worthwhile subjects were railed against in the mean time, South Wales skaghead scene, gentrification (“Red Brick Sychophant”, with its final mantra of “Oi luv moi house, I’m £250,000 in debt but I luv my house”), and ending with an instrumental with a whole load of messages on cardboard placards that just hammered home points all the more (pleased to see quote from Cop Shoot Cop “do not accept what you can’t change, change what you cannot accept”) – although the last one “3for£1” on a box of apple pies had my and others sides splitting. They have no material recorded but I’m so looking forward to something later this year.

With count lost on drinks by now In the Shit were a satisfying blur to finish the night. Again, snarly fast punk, their sound didn’t quite cut through as well as the previous but songs like “Wasted” definitely echoed in the head for long after. “Americans are cool” continued the popular theme of abuse hurled across the Atlantic. I bought their album to listen later anyhows which’ll hopefully remind me of more. I was jabbering on to Dave Cox on how they should keep plenty of politricks in their songs, use any opportunity to say something, but tonight’s show demonstrated it doesn’t have to be preachy, it can be an incredible laugh. The singer of This System Kills was telling me that he’d been singing animal rights songs on tour in Poland years ago, and on recent returns folks had come up to him saying they’d been vegetarian since then, so things do get across. Entertainment is easy (go play indie), using it to change the rest of life, that’s a bit harder but I think worth it. Punk ethics, what the fuck do I know, I’m a metalhead! 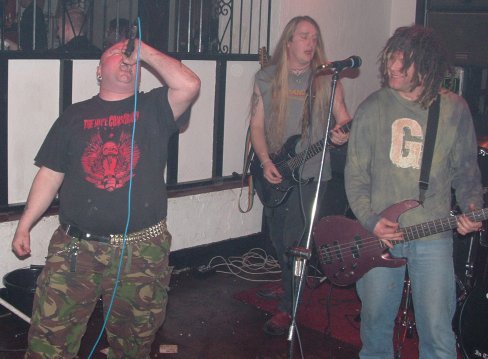 Cycle home seemed quick but wasn’t, had to walk up any gradient steeper than 1 in 100, had a puncture on Conwy bridge, need to rethink strategy or move to East Anglia.